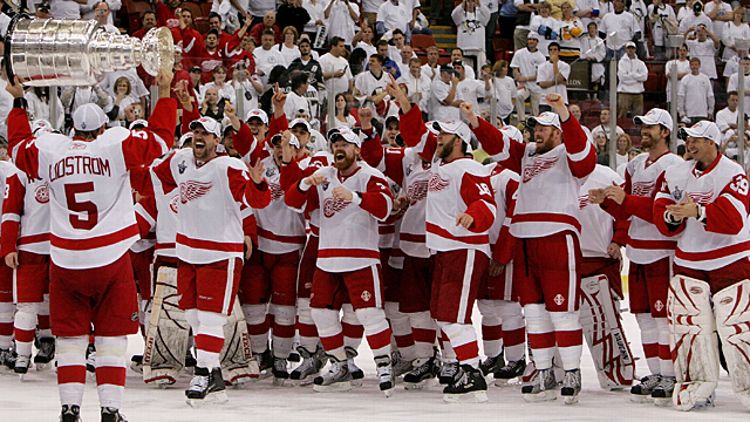 [Eds. note: The Red Wings clinched a playoff spot after this post was published.]

It’s one of the most impressive streaks in recent NHL history: The Detroit Red Wings have gone to the playoffs in 21 straight seasons. In the 30-team era, it’s a huge (some would even say impossible) feat that speaks to the consistency of one of the league’s model franchises.

But heading into the season’s final weekend, that streak is in jeopardy. After Thursday night’s action, the Red Wings are still fighting for one of the final spots in the West.

As we try to wrap our heads around the prospect of witnessing our first NHL playoffs without the Detroit since 1990, let’s take a look back through all 21 seasons of the streak. Here are five playoff moments that Red Wings fans will remember forever, and five more that they’d probably rather forget.

No. 5 — Larionov finally ends it
The Wings were heavy favorites against the Hurricanes in the 2002 Finals , and they were in a tough battle as Game 3 stretched late into a third overtime. That’s when Igor Larionov took over, scoring a brilliant winner.

(I’ve always loved the mistimed leap by Mathieu Dandenault. This is why defensemen don’t get to join overtime 2-on-1s.)

No. 4 — Seven in seven
Detroit and Colorado had one of the most storied (and bloody) rivalries in NHL history, but they only met once in a Game 7. The Red Wings made sure they got their money’s worth, shelling Patrick Roy and the Avs in a 7-0 rout.

(Note how the Avs wisely pull Roy after he’s given up six goals to the Red Wings, instead of waiting till nine.)

No. 3 — Darren McCarthy lives the dream
This is one of the prettiest goals in Stanley Cup finals history. The fact that it comes from the Wings’ fourth-line enforcer makes it all the more memorable.

No. 2 — Yzerman’s double-OT laser
The 1996 Red Wings recorded the most regular-season wins in NHL history, but were stretched to double overtime of Game 7 against the Blues. That’s when Steve Yzerman took over. It’s not some sexy end-to-end rush or a spectacular deke, but this remains one of the greatest goals I’ve ever seen. The behind-the-net replay at 3:55 really seals it.

No. 1 — The four Cups
There’s nothing better than seeing your team lift the Cup, or at least that what I’ve been told. Wings fans got to see it happen four times over a 12-year span. No wonder we all hate them.

(Why, yes, these Wings fans are celebrating their first Cup in 42 years by singing “Whoomp! (There It Is).” Don’t judge.)

(Skip ahead to about the 13-minute mark; this is the emotional Konstantinov/Mnatsakanov presentation.)

(This was the last game of Scotty Bowman’s legendary coaching career. In a great moment, he pulls out a pair of skates so he can take his own lap with the Cup.)

(This was the first time in NHL history that a European captain was presented with the Stanley Cup.)

No. 5 — One and done
One recurring feature of recent Red Wings playoff history is their habit of occasionally having dominant regular seasons and then losing in shocking first-round upsets. That list would include defeats at the hands of the Kings in 2001 and the Ducks in 2003. But perhaps the most stunning came in 2006, when the Wings put up 124 regular-season points, only to fall to the eighth-seed Oilers in six games.

(As if losing to an 8-seed wasn’t bad enough, this was also Steve Yzerman’s final game.)

No. 4 — Borschevsky and Baker
It’s hard to fathom now, but there was a time when the Red Wings franchise was known as the NHL’s poster child for choking in the clutch. These two early ’90s goals helped cement that reputation.

(This overtime goal in Game 7 eliminated the 103-point Red Wings in the first round of the 1993 playoffs.)

(One year later, lightning strikes again as the no. 1-seeded Wings give up a bizarre late winner in Game 7 against the 8th-seeded Sharks.)

3 — Swept by the Devils
The Wings had won the Presidents’ Trophy in the lockout-shortened 1995 season and seemed like a good bet to win their first Stanley Cup in 40 years. Then they ran into the Devils and were easily swept aside, scoring just seven goals in the entire series.

(For an added retroactive kick in the teeth, the Conn Smythe winner that year was a guy by the name of Claude Lemieux.)

No. 2 — The hit from behind
This is the infamous cheap shot that broke Kris Draper’s face. To add insult to injury, the Wings are eliminated and have to shake Lemieux’s friggin’ hand. Dino Ciccarelli does not approve.

(On the one hand, this hit was dangerous and cheap and everything that’s wrong with hockey. On the other, it gave us future moments like this. Personally, I’d call it even.)

No. 1 — Fleury robs Lidstrom
The Wings won four Cups. It could’ve been five, if not for this spectacular save by Marc-Andre Fleury in the dying seconds of Game 7 of the 2009 Finals.

(I’ve always felt like this save should’ve been a bigger deal. Game 7 of the Finals, and a future Hall-of-Famer gets robbed on a diving save in the final seconds? Shouldn’t this be one of the three or four most famous moments in recent NHL history? It never feels that way. I’m rambling.)

So there’s 21 seasons of Red Wings playoffs boiled down to one list. Come Saturday night, we’ll find out if they get another chance to add to it.