The Trenchie Awards: Getting to Know the NFL Draft’s Huge Crop of Linemen 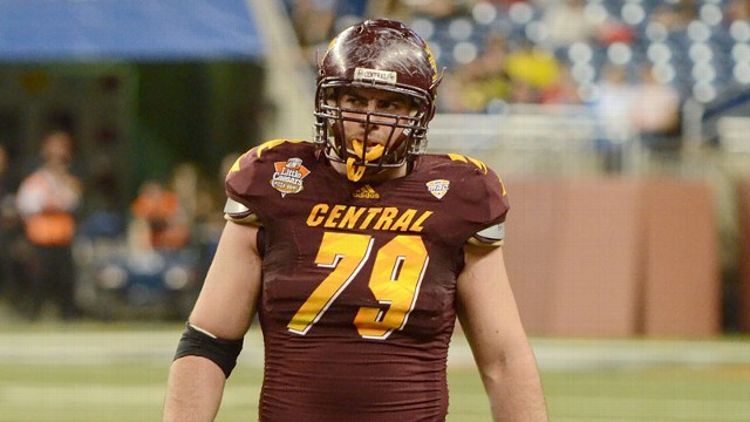 For defenders of the NFL draft as must-see TV, last night was tough. A total of five skill-position players in the first round, including just one quarterback, is a pretty tough sell to the casual fan. There was one group, though, who couldn’t have enjoyed last night any more than they did. Just trust me when I say that for us line-play nerds, last night was crazy. But we understand that some of you don’t spend a lot of time watching the MAC (we actually don’t either), observing guard play in the ACC, or keeping tabs on the left tackle when the Heisman Trophy winner has the ball. Don’t worry. We’re here for you. It’s with all that in mind that we present a special draft edition of the Trenchie Awards with the hope that after today you might know each top-10 pick just a bit better.

The prevailing wisdom in the lead-up to the draft is that an offensive tackle would go first overall. It just wasn’t this offensive tackle. From what I can gather, it was really Fisher’s excellent Senior Bowl week that got things rolling downhill, and by the time yesterday rolled around, no one was really surprised when he ended up jumping Luke Joeckel. The question is why he did.

Both — as you’d expect from players who go one and two overall — have elite feet and quickness. They each look very comfortable getting into their pass sets, and you’ll have to watch a ton of tape to catch a pass rusher getting to the edge on either. They stonewall guys so effortlessly that often, defenders just give up.


Where Fisher has the slightest of advantages is in situations like the one above. He and Texas’s Alex Okafor went at it all week at the Senior Bowl, and to Okafor’s credit, he tried plenty of moves in trying to figure Fisher out. Here, he goes with a straight bull rush, and how Fisher responds is a big part of what made him the no. 1 pick. The movement itself is subtle, but you can see it right before Okafor tries to move back inside. Fisher drops his hips for a split second to re-anchor, and in doing so, he’s in control again. Because he has the strength to withstand the power move, he’s balanced when Okafor tries to move back inside.

To contrast, here’s Joeckel against LSU. He’s off-balance from the initial punch, and the play ends with him on his back. Again, it’s a minor gripe, and both of these guys are likely headed to a couple dozen Pro Bowls. But if you’re looking for whatever tiny qualities separate them, that’s my guess.

One more thing about Fisher, and it’s more of a personal preference than anything else: He’s mean. He’s so good at maintaining his balance and keeping his hands latched on that at the end of plays, he likes to finish with a drive and a shove that occasionally lead to results like the one above. Yes, the defender only goes down because he was table-topped, and yes, you could consider this slightly dirty, but this guy was on skates long before he’s tripped.

As Bill Barnwell wrote earlier today, the Dolphins’ choice to go up and get Jordan was one of the night’s surprises. Cameron Wake is already one of the five best rushers in football, and in adding Jordan, Miami is trying to make getting to the quarterback the identity of its defense.

Aldon Smith’s name came up several times last night in discussions about Jordan, and that’s because of plays like the one above. There are times when Smith uses his length to completely avoid contact with offensive linemen. The separation he can create with those arms prevents tackles from getting into his body, and with one quick rip, he’s around the edge and into the backfield. The 6-foot-6 Jordan does that here.

What should be interesting is seeing how Miami uses him. Jordan defenders have said that his low sack total from a season ago (five sacks in 13 games) is more a product of the different roles he played at Oregon than a sign of limited pass-rush ability. He’s an amazing athlete who’s shown an ability to cover, create pressure, and close on ball carriers in space. Using him as a traditional 4-3 defensive end almost seems like a waste of his talent, and Miami’s desire to come up and get him might be an indication that it will be looking to use more hybrid fronts on defense.

We probably should’ve seen this one coming — Chip Kelly, in need of offensive line talent for his manic offensive pace, brings in the best athlete among the draft’s elite linemen. Johnson’s story is familiar at this point. He started as a quarterback in junior college before eventually moving to tight end and finally offensive tackle at Oklahoma. He’s got very quick feet, moves well, and should fit perfectly in Kelly’s zone running game. What separates him from Fisher and Joeckel is the comfort with which he plays the position. He tends to be less patient as a pass blocker, and it leads to him losing his base and losing out after a strong start to plays. Luckily for Kelly and the Eagles, that’s the exact type of problem that can be corrected with more time and experience. All the skills are there, and it’s a good start to Kelly’s tenure.

This pick comes with plenty of risk, especially considering the pressure on Detroit’s current regime to turn things around. What selecting Ansah says to me is that Jim Schwartz has a ton of faith in defensive line coach Jim Washburn — faith that’s probably deserved. Washburn is considered one of the best defensive line coaches in football and spent several years with Schwartz in Tennessee before moving to Philadelphia and eventually falling victim to their defensive calamity. Ansah needs a ton of work, especially in the refinement of his pass-rush game, but every requirement — tangible and intangible — is there. He’s fast, very strong, and he plays extremely hard. The type of plays he was able to make at BYU based solely on instinct and athleticism likely have Washburn cackling like an insane person at what he’ll be able to do with a couple years of intensive work. The only concern for Schwartz is that he might not have that long.

Most pass rushers who go in the top 10 are going to be elite athletes who can get to the edge and get to quarterbacks. You can see above just how easily Mingo can; he uses a sudden, impressive move that shows what type of pass rusher he can be at the next level.

What many of those same top-10 picks don’t have, though, is an understanding of how to use their hands and maintain leverage in the running game. Setting the edge as a defensive end, and then keeping it, is a next-level skill, and it’s what impressed me most about Mingo. In the above clip, you’ll see him extend his hands, move laterally with the offensive tackle, and locate the ball as Mississippi State looks to get outside. On the next play, he uses his hands to ward off a cut block before stepping up and getting in on the tackle. Any first-round draft pick is going to have athleticism, but the nuances of playing defensive line — body control, hand usage, etc. — usually come later. Mingo already seems ahead of the game.

I wrote yesterday that I think Cooper will end up being the best player from this draft, and that a team was willing to take him seventh overall doesn’t do much to change that. Cooper is the first guard taken in the top 10 since 1997, and it’s deserved. (Note: Stop me if I get carried away here.)

As a pass blocker, Cooper often looks more like a tackle than a guard. He has excellent feet, looks very comfortable in his pass set, and is an overwhelming mismatch for almost an interior pass rusher. Defenses these days are looking to create more favorable inside matchups in passing situations, and eventually, offenses will have to adjust with a transition to more athletic guards. Cooper is that type of player — one who figures to do just fine against the Henry Meltons and Geno Atkinses of the world.

In space, Cooper is unlike any guard to come along in some time. He pulls with unbelievable ease and gets to the second level comfortably and with purpose. It’s not just that he can get to linebackers, but as a puller, he does an excellent job of identifying his man and latching on. He gives the Cardinals a ton of options in how they want to use him in their running game, and count me among the eight people on earth excited to see how they do.

Umm … yeah … I have nothing else to say about this one.

I feel sort of bad for Chance Warmack. Any other year, we’d be talking about him as the best guard to come along in years — an absolute ass-kicker who brings all sorts of nasty to the running game and will go a long way in transforming any offense that adds him. All of that is still true. Warmack doesn’t have Cooper’s controlled athleticism in space, but he gets to the second level very well, and he does a ton of damage while he’s there. They’re different types of players, but Warmack is still the type of guy who should be headed to plenty of All-NFL teams.

In getting familiar with most of these guys over the past few weeks, three players stood out as my favorites. Cooper was one; Tavon Austin was another. The third wasn’t a guy destined for the top 10, but every time I watched him, I got sort of jealous of people who root for teams that run 3-4 defenses. The 3-4 defensive end is one of the most difficult positions in football, but when it’s played well, it’s among the most rewarding to watch. We saw that this year, when J.J. Watt separated himself as the best defensive player in football while showing off just what a 5-technique is capable of as both a run and pass defender.

The guy who I thought might have the potential to turn into that type of player is UCLA’s Datone Jones (that move in the video above should look familiar). Jones’s final year as a Bruin coincided with a shift to a 3-4 defense, and Jones took to the scheme immediately. He does an excellent job of using his hands. He sheds blockers while maintaining his two-gap responsibilities. And when allowed to crash hard in the run game, he regularly makes plays in the backfield. It was all enough to make me wish he was a better fit for my Chicago Bears. And then, because there is no justice in this world, he ends up in Green Bay. I hate the NFL draft.