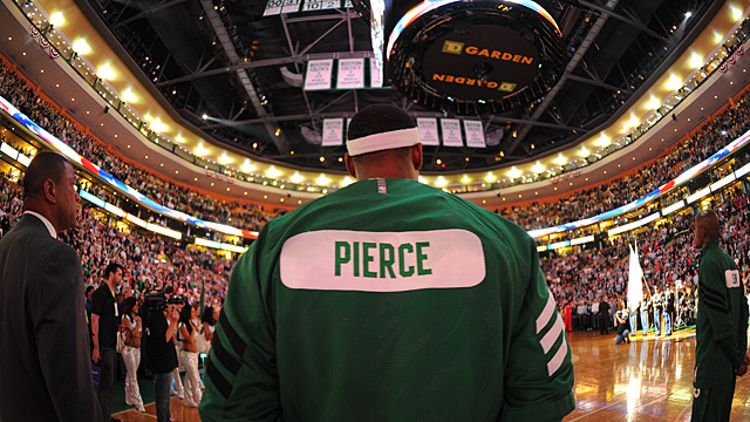 A couple of weeks ago I was listening to Grantland’s own Jonah Keri talk about some Reds pitcher who had “lost velocity” on his fastball. As he spoke, I wondered what the NBA equivalent of this would be. Baseball has radar guns that reliably identify a downturn in pitching ability; we don’t have that instrument in the NBA. It’s not as easy to detect performance declines in basketball.

If there’s one theme that’s dominated the last few weeks in the NBA, perhaps it’s the immemorial relationship between age and decay. The NBA season is long, basketball is grueling, and old guys break down. The league is full of aging superstars who are always a tweak or aggravation away from street clothes.

Like Jimmy Goldstein, Father Time is showing up all over the NBA playoff landscape. In Los Angeles, Kobe Bryant’s 34-year-old Achilles tendon snapped and ruined a great playoff push. A week or two later, Lakers team doctors are repeatedly marinating Steve Nash’s 39-year-old lumbar region in cortisone hoping that will somehow keep him on the court. In San Antonio, Manu Ginobili’s 35-year-old hamstring is a ticking time bomb. The list goes on.

In Boston, the Celtics’ aging stars are still standing, but both Paul Pierce and Kevin Garnett are on the wrong side of 35. In a cruel twist, the physical breakdowns of some of their younger teammates have forced both into more active roles at the precise time in their careers when they should be sliding into reduced ones. Pierce used to be able to carry the Celtics and create scoring opportunities at will. But, as evidenced by the atrocious second-half scoring performances of their first two playoff games, he can no longer do so on a nightly basis.

During the past few seasons, the gradual decline of Pierce and Garnett was partially masked by the ability of Rajon Rondo to create scoring opportunities for jump shooters. Rondo, the orchestrator, is very adept at attacking a defense, compromising its shape, and kicking the ball to an open teammate. Without Rondo, those passes aren’t happening, the sets aren’t as crisp, and as playoff defenses tighten, the Celtics offense is struggling mightily; they scored 23 points in the second half on Tuesday night.

Pierce is 35, and unless something drastic occurs this weekend, his 15th NBA season will likely conclude by this time next week. This season Pierce shot 43.6 percent from the floor, a significant downgrade from two seasons ago when he made 49.7 percent of his shots. What’s different? More than one-third of Pierce’s shot attempts now occur beyond the arc. His efficiency back there has always hovered around a respectable 38 or 39 percent, but as 3s have taken a bigger share of his total attempts, his overall field goal percentage has declined. At the same time, Pierce is getting to the rim less. Two seasons ago, when he set his career mark for shooting efficiency, 31 percent of his shots came at the rim; this season only 24 percent occur in this fruitful zone. So while Pierce is hitting shots at about the same rates all over the court, the overall profile of his shot selection has changed. 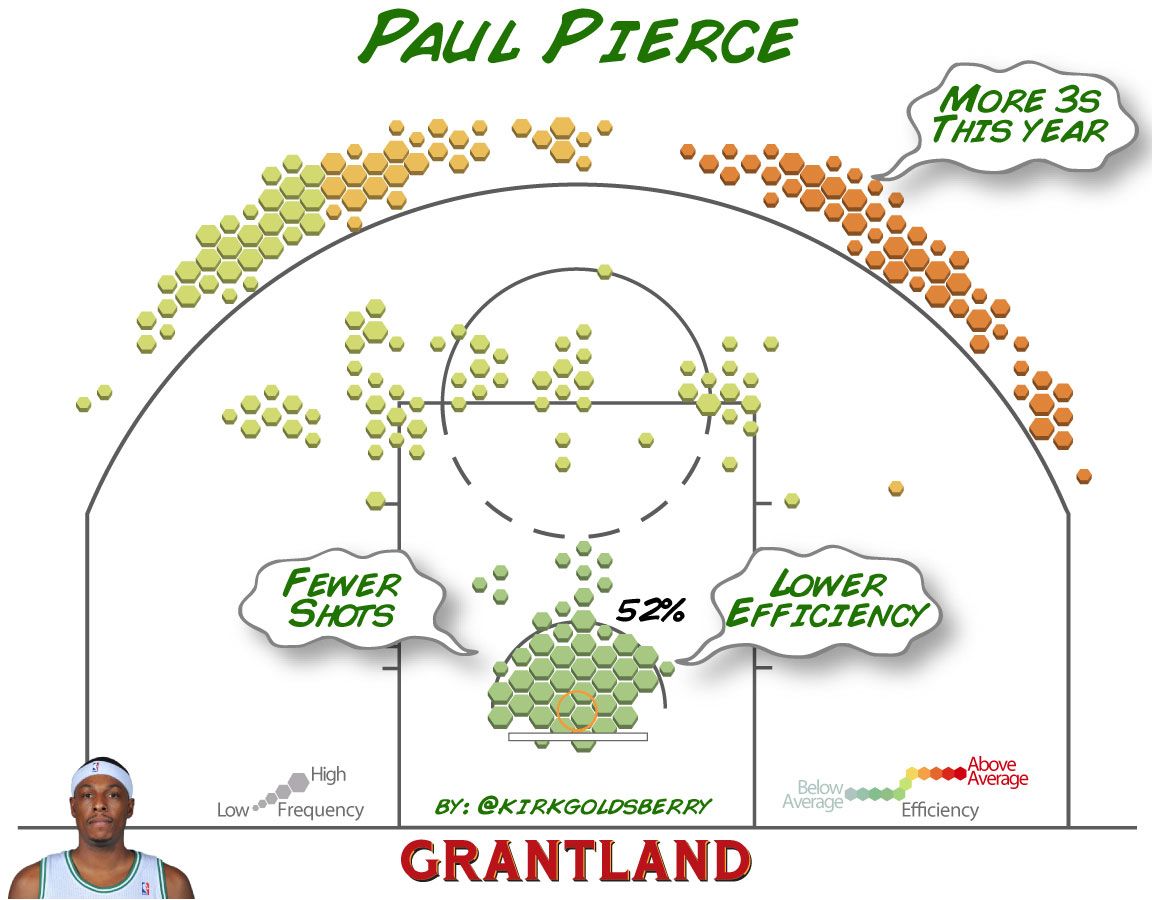 Pierce is undeniably one of the smartest and cagiest players in the league. From head-fakes and spins, to bizarre stutter-steps, Pierce has an enviable arsenal of offensive moves. But at 35, his feet are a beat slower and his leap is a bit lower. The result is a less aggressive version of The Truth. The Celtics are smart enough to know this, and with Rondo intact were strategic enough to accommodate this; yet, in the absence of Rondo and others, the team has been forced into relying upon Pierce too much. Out of 22 NBA players with a usage rate above 25 this season, only five are older than 30; Pierce is the only one older than 35.

Father Time kills everyone’s PER, and Paul Pierce is no exception. He may have a few more years left in him, but it’s critical that he’s not overused. The Celtics have done an admirable job handling Garnett’s minutes as he’s aged, and he’s been effective as a result. Going forward, it will be interesting to see how they handle The Truth.