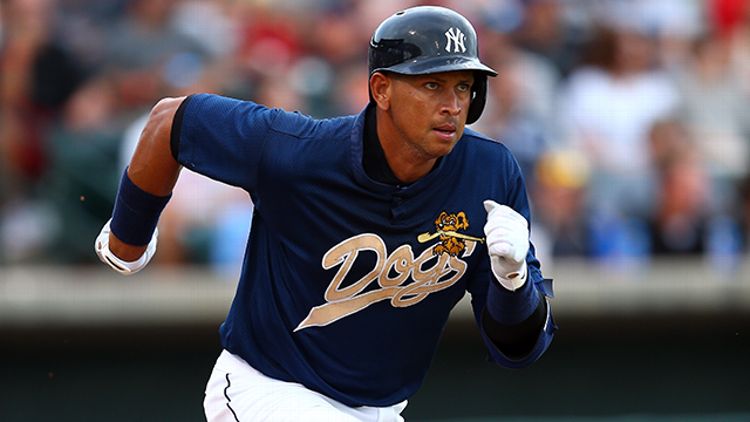 The headline on ESPN.com right now is “A-Rod decries mix-ups, lobbies for Fri. play.” My question is, do you think A-Rod knows what “decries” means? It strikes me as such a funny word to use in the context of a guy who allegedly owns pictures of himself painted as a centaur (and if he doesn’t, he still let someone take this one). Anyway, the whole bizarre saga took an even stranger turn when A-Rod sought the advice of a second doctor (who never actually met him) because he didn’t trust the Yankee team doctor. The second doc said his quad muscle was fine, and he could play pronto, and now A-Rod wants to be in the lineup tonight. Which implies, of course, that the Yankee team doctor was lying about the injury at the behest of the team, presumably to keep him off the roster so the Yankees could collect insurance rather than pay out his exorbitant contract themselves. It makes sense, because now the Yankees only have to sideline him long enough for Bud Selig to levy a Biogenesis/PED suspension on him (“all but assured,” per CBS’s Jon Heyman), which could happen any day. So the odds of the Yankees actually letting him play are somewhere in the neighborhood of nil, and it’s hilarious that they might be lying about his quad to save money. Of course, they’d love it if A-Rod would just shut up and ride lamely off into the sunset, but what happens when you want A-Rod not to be annoying? A-Rod gets annoying! Because after all this, A-Rod has accepted the Yanks rehab plan. I’m a Yankees fan, but personally I hope he brings Cashman and the team doctor and whoever else down with him. My ideal team is just Jeter and Mariano playing 2-on-9, with Eduardo Nunez as the mascot.

Last seven games: Only six hits, but five of them have been home runs, which is good for a 1.050 slugging percentage. You gotta love a guy who knows what he does well. You know what you don’t have to love? Time Warner and MASN and Major League Baseball, which have united in bureaucratic incompetence to ensure that I can’t watch this game. I’ll tell you something here and now, gang — if I ever have a webcam, I’m blacking them out. (Reallllly hope I never have a webcam, though.)

There are better pitchers in the game than Chris Sale, but to me, he’s the most exciting to watch. I’m going to be lazy and copy-paste what I wrote about him in the All-Star Game pitchers’ duel diary, but I would also suggest visiting that link if you want to see how he mowed through some of the best hitters in the National League over two incredible innings. Ahem:

The big, sweeping lefty is all about horizontal movement on his pitches. Here’s how he ranks in MLB for each, courtesy of Baseball Prospectus: fastball, first; sinker, third; changeup, first; slider, fourth (first among lefties). And by the way, the slider also drops more than any other pitcher’s. That’s almost too good.

The only bad thing about Sale is that he might lack heart, since he’s 6-9 on the year despite excellent numbers across the board.

In a top-heavy week with four really great matchups and a lot of duds, I choose to dedicate item no. 7 to comedy.

It was very tempting to make this no. 1. A month ago, this would have been the head honcho pitchers’ duel. Now? Much less attractive. The fact is that Lee lost last weekend’s pitchers’ duel to Matt Harvey, has been mediocre since the All-Star break, and is facing the guy with the most run support in the majors. The pitching matchup of the weekend franchise is far too important to waste on fading has-beens and Lucky Leonards! (Still worth watching, though.) (Obviously.) (Triple consecutive parentheses, new world record.)

The Rays are bright, surging stars, scorching their way through the rest of the league on their way to the top of the standings. The Yankees are wrinkled and creaky and using what must be magic to stave off total collapse and remain vaguely in the wild-card hunt. There’s only one thing I know for sure in this series, and that’s that Rays righty Chris Archer is going to absolutely demolish the Yankees on Friday. He has been super hot in his last four starts, and only the Miami f—ing Marlins have produced fewer runs against right-handed pitching than the Yankees this year. Matt Moore goes for his league-leading 15th win on Saturday, and on Sunday Yankee legend Phil Hughes will attempt to give up seven solo home runs by the fifth inning. Can’t wait.

There are six starting pitchers in this series, and only one of them — Baltimore’s Chris Tillman — has an ERA below 4.00. Tillman’s is 3.84. Furthermore, Boston has the league’s best run-scoring offense, and Baltimore is third. So if you’re an idiot who hates good pitching and loves games that rage on for the better part of five hours and finish with scores like 13-8, this one’s for you!

3. Pitching Matchup of the Weekend: Wainwright vs. Minor (Friday, STL-ATL)

Wainwright has been the best pitcher by WAR for most of the year, and the crazy thing is that his BABIP is pretty high at .308, indicating that maybe he’s been unlucky. He’s also the only pitcher in baseball who walks fewer than one batter per nine innings (barely, but still), and it’s no surprise that he is also top 15 in first-pitch strike percentage. (Though Phil Hughes is no. 1 in that category, and Phil Hughes is godawful, so let’s not romanticize it too much.) For a guy who doesn’t strike batters out at a league-leading rate, and only averages 91 on his fastball, this is all very impressive. I’ve said it before, but he’s the 2013 version of Greg Maddux.

And Mike Minor? He’s a nice young man with a 2.95 ERA and top-20-to-top-15 stats in almost every category. You could do much worse than Mike Minor. He’s also the undisputed ace of the Braves staff now that Hudson’s gone with the year’s saddest injury, and he’ll be the man Atlanta turns to in Game 1 of the playoffs. This is a great chance for him to show that he can stand up to other aces like Wainwright; it’s a dress rehearsal before the real deal.

The Dodgers are currently the hottest team in baseball, winners of six straight and suddenly atop the weak NL West. A very Mets-like vibe of incompetence, bloated payroll, and bad luck has surrounded this team for the past couple years, but now it’s vanishing in the heat of summer. With Puig destroying baseballs and Kershaw fighting to post a sub-2.00 ERA (he’s at 2.01 now) and win another Cy Young, there’s a storm of excitement out west. And the Reds? As of last weekend, the Reds have now won two series against teams with winning records, and both of those came against the Pirates. They keep winning the games they should win against the dregs — they took three of four from San Francisco this week in the latest example — but they lack a statement series. That being said, the headline above is more convenient rhyme than truth. With a run differential of +85, the Reds are almost a lock to take a wild card. Still, don’t you want to see them dominate?

I wrote that headline mostly because I hate the word “Hotlanta” so much, as a nickname and concept, that I’m trying to bludgeon it to death with overuse so that it disappears from our vernacular. “Hotlanta” might have been a cool thing to say at one point, but now it’s just infuriating in that cutesy sportswriter way. And it’s meaningless. Every city is hot. Literally every American city is miserable and hot in the summer. If anybody says Hotlanta ever again, they should have to wear a giant bird costume and march through downtown Dallas in August. It’s the worst.

So, this series has the two best teams in the National League, the best pitching matchup, and the distinct possibility of Jason Heyward doing things like this. They win the weekend.