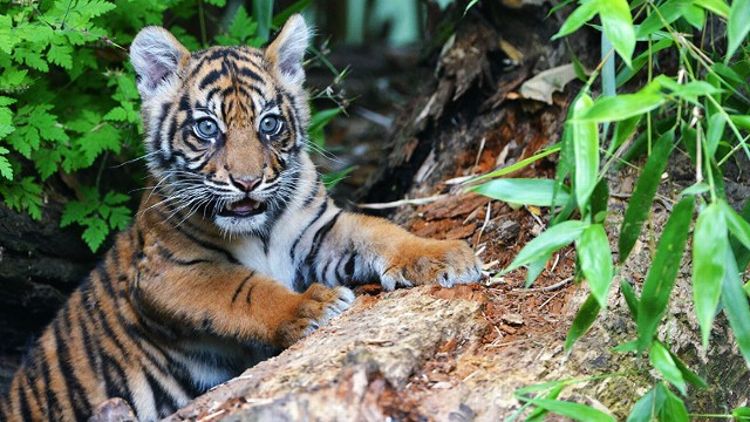 Look, here’s a picture of Arsenal players dressing up like samurai warriors during their trip to Japan this week. They also learned how to be sushi chefs.

The sports Internet gives us a never-ending supply of these stories. So with that in mind, this is either the beginning a series or just a good way to pass the time in late July, but here are some Internet greatest hits from athletes this week.

The Cardinals’ Darnell Dockett is a perfect example of a sports human who would be pretty much anonymous without the Internet. Twenty years ago, he’d just be another great defensive lineman who we’d all sorta forget about when people started talking about their favorite players. But today? Now everyone knows about Darnell Dockett’s tiger. Thank god.

My pet tiger his name is "buddy" I'm gonna bring him to a practice in training camp atleast "one day" he's handsome! pic.twitter.com/XiFHvzr7PC

As he told Fox Sports 910 in Phoenix, “Yeah, I’m serious, a little baby tiger. It’s the coolest thing ever. I’m trying to bring him to training camp. I don’t know if they’ll let me, but we’re going to see.” He also described the baby tiger as “very chill and playful,” something that seems subject to change as Buddy the tiger gets older. Will Darnell Dockett get eaten by a tiger by December?

On the other hand, maybe Darnell Dockett just has a way with tigers.

This isn’t Dockett’s first rodeo as far as exotic animals are concerned. Two years ago, he claimed that he adopted a baby alligator named Nino, and after tweeting about feeding Nino with Ruth’s Chris Steakhouse food and Bob Evans pancakes, he earned a stern open letter from PETA. Earlier this week, Dockett also tried to spend $30,000 on an exotic monkey. As he explained, “Could you picture that on game days? I’m coming to the game, I have my monkey with me, he has my jersey on … Think about it. After the game, the fans see me with the monkey, ticket sales go up, Dockett jersey sales go up. Why? Because they all want to see me with the monkey.”

Darnell Dockett is the Ace Ventura of athletes, basically. Now you know. And, hey, speaking of animals:

This lady heard me PEE'N in the bathroom and said "that was loud I thought a horse was in there" I said "sh*t! it was", and winked at her!

“Slow starts will get you fired, cut and (bring) change real quick for everyone,” Panthers wide receiver Steve Smith said Thursday. “I’m more at the point now where if I was a female and 35, I’m looking to get pregnant and married tomorrow. So sense of urgency is an understatement.”

Just a great moment in Media Day history right there. So will these Panthers finally give birth to a Super Bowl?

Rafa Nadal Is on a Boat

These are just some important photos of Rafael Nadal dancing shirtless on a boat. Or a yacht, maybe. I don’t know the difference, probably because I’m poor. The word “yacht” just sounds wealthy. But anyway, the operative point is that hanging out and partying all day on ridiculously expensive boats is something that people actually do. Like, it may not be a thing that you or I will ever do, but there’s a whole world of obscenely rich people, usually European, for whom this represents normal summer activity. Like, this is just how Rafa Nadal spends a Saturday. Good for him.

(The king of yacht parties is probably Leonardo DiCaprio. Example: This topless Australian yacht party with Jonah Hill for New Year’s. While we’re here we should also note this dispatch from the South of France — which I found while Googling the other Leonardo DiCaprio yacht party — because the headline is outstanding. TOO YACHT TO HANDLE.)

LeBron James Has a 24-Hour DJ

If you’re looking to get some exclusive footage of a dude playing music in LeBron James’s hotel room, there is this video announcing the presence of his 24-hour DJ, and then here is an Instagram video in which he tells us: “It’s still going down in my room here in Guangzhou China! 24/7. S/O dj ‘Bear’ on the ones and twos.”

But then there’s the broader question in all this: Is it cool to have a 24-hour DJ? Let’s look at both sides of this argument.

YES: Because imagine how cool it would be to have someone following you around playing awesome rap instrumentals at all times. Actual music might get annoying, but imagine a DJ just playing different rap beats everywhere you went. Imagine walking into your office followed by a DJ wheeling his turntables behind you, playing the instrumental from “The Next Episode.” That’s the most baller shit on earth.

NO: This seems like an idea Tom Haverford would come up with, and it’s never a good idea to be like Tom Haverford for more than 30 seconds. Also, as Jacoby pointed out yesterday, having some random dude following you around playing music all day would quickly become the most annoying shit on earth. The only thing more annoying would be having said random dude just chilling in your hotel room at all times. So maybe this isn’t as cool as we thought.

Chis Bosh’s Son Is a Boss

Red Porsches, rare portraits
Rare guns if you dare come near the fortress
This apple sauce is from the apple orchard
This kinda talk is only reserved for the bosses
Which means I get it from the ground
Which means you get it when I’m around
Rich n—–, black Bar Mitzvahs
Mazel tov, it’s a celebration bitches, L’Chaim
I wish for you a hundred years of success but it’s my time
Cheers, toast to crime

OK, so this video is technically from 2010, but (a) Grantland editor Sarah Larimer sent it to me yesterday, so it feels new, and (b) Patrick Sharp and I are basically brothers, and (c) Shooter, man. He wipes his mouth after he drinks from the bowl. And plays hockey, and wears hockey jerseys, and … just look at him. Shooter is the greatest dog on earth.

The response to any/all criticism. For an athlete or anyone else.

We have to take a second to discuss Pau Gasol’s Twitter account, because it’s getting ridiculous. We don’t deserve Pau. Before I followed him on Twitter, I thought of him as a big, gentle superstar who was probably a little too sensitive for his own good and otherwise irrelevant. Now I see it was me who was the asshole all along, and Pau is just the best human on earth. An international treasure, deep in thought, pondering global warming on our behalf. Every time you choose plastic over paper, a single tear rolls down Pau’s cheek.

After he’s done playing, he should probably head up the United Nations.

Until then, we need him to keep tweeting and restoring faith in humanity.

Every single day, Pau Gasol’s Twitter account offers definitive proof that he’s a better person than all of us. Not in a preachy, obnoxious way. He’s just a thoughtful, cheerful, irrationally sincere human who apparently has Google reminders set for all his favorite celebrities:

… And that’s where we end. Nobody’s topping Pau.

Everyone have a great weekend, and try to live your life like a professional athlete, preferably with yachts and tigers. Then come Monday, try to live more like Pau Gasol, because the world would be a much better place if we all lived like Pau. And, hey, happy birthday, Kevin Spacey!