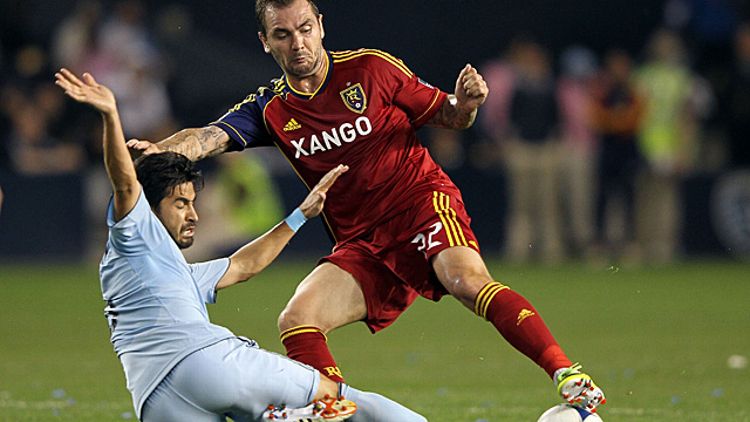 One of the rewards of following a league closely over time is watching the organic development of rivalries. I’m not talking about the preset rivalries of geography, or, in a relatively new league like MLS, the wholesale adoption of rivalries from other sports. In a way, I’m not even talking about the folk rivalries sustained by fans. No, I’m talking about rivalries that first and foremost are kindled by events on the field, and that may flare up and subside with a generation of players and coaches accruing histories and resentments with each game.

Writing for the Guardian the other day, I gave the example of the Manchester United and Arsenal rivalry of the turn of the century — where the ongoing battle for supremacy between the two best teams in the Premier League became almost a footnote to the increasingly bizarre soap opera of player interaction. From the early king-of-the-ring brawl sparked by an innocuous-looking tackle by Winterburn on McClair, the business of titles going back and forth between Old Trafford and Highbury was peppered with flashpoints: Keane vs. Vieira in the tunnel, Keown taunting Van Nistelrooy, Pizzagate. Though on reflection, perhaps what I’m talking about is more in the fashion of the mutual enmity between Chelsea and Liverpool that emerged in the Mourinho and Benitez eras, seemingly from nowhere — certainly from two teams who’d never particularly regarded each other as natural rivals.

In MLS this latter type of emerging rivalry is rare, largely because the structure of the league that dims the type of institutional memory a cumulative rivalry needs to ferment. When you look at the turnover of a club like Chivas, or Toronto, say, in recent years, it’s conceivable (though barely with the current state of both clubs) that there could be a great game, or a controversial game between the two, but it’s harder to conceive of the same players and coaches being around to contest the next one the following season. It’s one of the side effects of forced parity — the structural dynamics and turnover of the league tend to mitigate against the same players coming up against each other repeatedly and building familiarity (contempt?), especially when they’re in different conferences.

If there is an exception to this, it might be Real Salt Lake and Sporting Kansas City — two teams whose wealth of attributes in common (stable coaching teams, new stadiums, small-market success, strong fan bases, front-running sides in their respective conferences) ends the second they step on the field. At that point, they tend to play out one of the most persistently competitive games of the calendar — full of flashpoints and seemingly bearing all the hallmarks of an “organic” rivalry, though as we’ll see, it’s a little more complicated than that.

In typical fashion, the most recent encounter, last week, started with a Chris Wingert “reducer” on Sporting’s Kei Kamara that saw the player booked and later suspended by the Disciplinary Committee (or DisCo if you prefer — and let’s face it, who wouldn’t?), thus setting up things perfectly for Wingert’s later dismissal to redirect the course of the game.

In the physical match, Sporting scored an equalizer within seconds of his second-half dismissal, then scored a stunning winner from Ike Opara, 90 seconds over the five minutes scheduled as a minimum for stoppages. Ironically, one of the reasons there was extra time was Opara’s inserting himself in an off-the-ball argument that had nothing to do with him — stepping in to shove Nat Borchers in front of struggling young referee Matthew Foerster. At full time jeers and plastic bottles rained down on the field from the Utah crowd and another chapter was added to the recent turbulent history between the two teams.

Trying to parse the exact origins of the rivalry is made a little more difficult by Sporting in particular insisting that there isn’t one, or at least not an exclusive one. Their staff will talk about a rivalry with Chicago that goes back to the 2000 MLS Cup and perceived negative soccer at the opening night of what was then Livestrong Park; or talk about Thierry Henry’s knee to Roger Espinoza’s head that makes encounters with the Red Bulls intense; or the recent playoff battles with Houston. All of these discussions mostly take place in a spirit of marvel that so many teams are targeting them now, when for years in their incarnation as the Wizards they were seen as an afterthought.

But when it comes to RSL, the Sporting staff affect a certain bemusement — one team insider did mention a preseason flashpoint a couple years back, when an exhibition game was ended prematurely by a bench-clearing brawl, but even then they’re dismissive of what they see as an incident elevated by hearsay and Twitter. Any rivalry is one-sided, they claim.

From RSL’s perspective, they would say that. In their version of events, meetings between the two are not just matches between two teams, but a veritable referendum on MLS playing styles. When speaking to Garth Lagerwey, RSL general manager, his comments are a mix of genuine praise for the Sporting organization, whom he played for in the Wizards days, and aesthetic disgust at their current manner of play. It makes for a dissonant mix.

“If the Sounders is the greatest launch in professional sports history, or one of the greatest, Sporting K.C. has got to be one of the greatest rebrandings. I mean I played for Kansas City in 1996 in the first year of the league and we got 20,000 on opening night and I don’t think we broke 10,000 for the rest of the year after that. And if you’re doing that in a 75,000-seat stadium, or whatever that is, there’s just nothing — no atmosphere whatsoever. And when you watch the transformation of that market it’s just amazing and I think it’s a really good story about the progress of the league.” He also insists on adding, “There’s a lot to like about Kansas City and I certainly wouldn’t want to give an impression contrary to that.”

But when we get on to the subject of playing styles and the recent rivalry on the field, Lagerwey is less diplomatic.

“The rivalry is … we play diametrically opposed styles of soccer. We want to keep the ball, we want to possess, we want to attack. Kansas City want to kick people, pressure you all over the field and try to rely on set pieces and turnovers to generate their chances. It’s really an interesting rivalry in terms of where the league wants to go. To use facts: Kansas City leads the league in fouls committed by a wide margin. They wear their style on their sleeve. They’re going to come in and try and intimidate and impose their style and even beat you up a little bit. They’re not shy about that, they’re proud of it. So I think the league has to decide do they want that kind of physical, rock’em-sock’em style, or do they want to play more of a passing, possession, beautiful game. And I think that’s really why the rivalry comes into focus, because you see these two different directions the league could go.”

Jimmy Nielsen, the Sporting goalkeeper, thinks that Sporting’s reputation as a physical side is unfair. “I don’t think we are as physical this year as we were last year. We’re playing some more soccer. Last year we used all the tools we had in being physical, strong, playing hard — this year we actually played some very good soccer in between. You have to be able to do both in this league.”

Lagerwey isn’t convinced. “I know they’ve said that, and I don’t mean to get into something versus Jimmy, because he knows his team and I’m sure he can speak with expertise to that. But I believe — and you can look this up — that they’ve committed even more fouls than last year so far. And if you look at the goals they’ve scored from run of play versus set pieces, the fact is that if they’re playing more soccer they should get more goals from free play, and I’m not sure that they have.”

He continues: “For our style, to play an open game with players who are good on the ball and want to do entertaining things for a crowd, you need the protection of the referees. We do have to have fouls whistled, we do have to have the players protected. I think the NBA went through this, NHL went through this. If you look back at the NBA in the mid-’90s when you had the Bad Boys in Detroit and the holding, physical, defensive teams in New York, the NBA decided to go away from that. They decided it would be a more entertaining game if it were open and more tightly officiated, and more scoring. And the NHL made a similar conclusion after the last lockout, and it’s opened up those leagues and made them more entertaining and exciting. And I think it’s a decision we’ve got to take as MLS — is which direction are we going to go?”

Still, Lagerway sees the rationale behind Sporting’s muscular style, stating, “Kansas City’s style has been effective. And they’ve absolutely been rewarded for what they tried to achieve. So if I’m them, I’m going to keep doing it, until somebody tells me I can’t.”

The structural hallmark of both teams is a rare consistency in MLS, one that’s born of patience.

Perhaps it’s the men guiding their teams on that path who keep the two on their cultural collision course. Both Peter Vermes at Sporting and Jason Kreis at RSL are visibly animated presences on the touchline, though in subtly different ways — if styles of screaming can be considered subtle. Kreis is the consummate in-your-face competitor. As Red Bulls coach Mike Petke recalled of his time playing against him, “There are no friendships on the field with Jason … he definitely instills that biting mentality to his players that he had as a player.”

Kreis’s confrontational style is slightly different from Vermes’s habit of constantly yelling at his players while studiously ignoring the opposing bench. Vermes seems perpetually outraged at his own men — which suggests that the opposition are something of an incidental nuisance. Hardly surprising that specific rivalries don’t come into focus within that mind-set — the opposition is just the opposition. And given their own mind-set, it’s hardly surprising that Kreis, Lagerwey, et al. should insist that other rivalries should be front and center. Expect this one to simmer a while longer. Pass the pizza.