The Man Who Made Darrell Royal 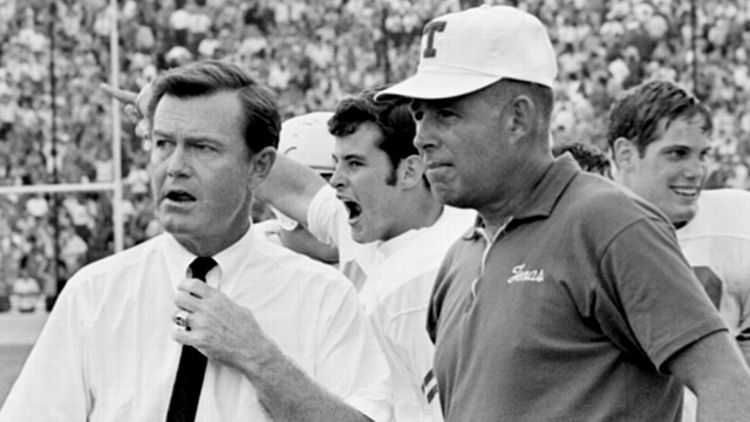 Marcel Meyer was a 17-year-old kid playing football at Westfield High School in Houston, Texas, when the program got a new head football coach. “It was a huge deal because our high school paid him $100,000-a-year salary, plus a ‘company car.’ The other academic teachers were pissed. No surprise there.” While six figures is still nothing to scoff at today, in 1988 it was ridiculous money for a high school football coach. Even in Texas.

But Westfield hadn’t hired just a Skoal-dipping pseudo-hardass in bike shorts. They had hired Emory Bellard (probably also wearing Bike shorts), an almost-forgotten footnote who transformed college football while an assistant at the University of Texas in the late ’60s.

Darrell Royal, who died at 88 this week, will have his canonization visible Saturday when Texas takes the field for its first offensive play against Iowa State. (Head coach Mack Brown has already announced that the Horns will line up in the wishbone formation to start the game as a tribute to Royal.) The wishbone, the very offense that made Darrell Royal, was the invention of Bellard (who himself died in 2011 after battling ALS). And the novel, Y-shaped backfield would deliver Royal his second and third national championships at UT and seal his legacy in Austin forever.

In 1967 the Horns finished a pedestrian 6-4 and tied for second in the old Southwest Conference. After watching in-state rivals Texas A&M beat Alabama in that season’s Cotton Bowl, Royal handed his assistant the charge of coming up with an offense utilizing three running backs. Bellard came back with an option attack that put a fullback directly behind the quarterback and two tailbacks split on either side of the fullback.

That Texas was able to escape with a 20-20 tie in the offense’s debut against the University of Houston to start the ’68 season owes more to the fact that Texas QB Bill Bradley attempted a total of seven passes — three were intercepted. Backup James Street fared even worse, as 50 percent of his passes were picked off; granted, he only attempted two. The next week Texas lost 31-22 in Lubbock despite outgaining Texas Tech 380 to 268 yards.

The Horns then reeled off 30 straight victories. In the 18 games Texas would play before facing Arkansas in “The Game of the Century,” their average margin of victory was almost four touchdowns (27.8 points to be exact), and only once did they fail to win by double digits (a 26-20 win against Big 8 rivals Oklahoma in October 1968).

Texas finally lost to Notre Dame in the 1971 Cotton Bowl, but by then Emory Bellard’s offense had transformed college football; it would be adopted by two of the game’s most legendary coaches, Bear Bryant at Alabama and Barry Switzer at Oklahoma.

Bellard himself would leave UT to become the head coach at Texas A&M. After a moderately successful stint in College Station, he went on to an unsuccessful run as Mississippi State’s head coach.

Three years after leaving Starkville, Bellard somehow turned up at Westfield High School. “He might have been too old to keep coaching college football, but he didn’t want to retire,” guesses Meyer, who admits he had no idea who his new head football coach was before one of his classmates (he thinks) told him that Bellard had coached at Texas A&M before.

“He seemed so old to me at the time. He must have been in his late 60s, I guess,” speculates Meyer. “I quit football my junior year because I wasn’t starting. One of the assistant coaches couldn’t understand why I wasn’t playing, so he brought me in to see Bellard. I remember sitting across from him in his small cinder block office. He kind of yelled at me and said if I wanted to come back into the fold I couldn’t miss a single practice and I would have to run 20 extra laps the circumference of the football field every day, after three hours of practice.”

Like most teens impervious to the knowledge older people are trying to impart on them, it took Meyer years to understand that, while part of it might have been standard sports bravado, there was another part of the punishment, meant to teach him not only how to respond to adversity but to understand that commitment usually doesn’t follow the path of least resistance. Almost 25 years later, all but the strangest of specifics have evaporated from memory. “If you did something right around Bellard, he would say you had ‘the spizz-a-rinktum.’ Nobody quite knew what that meant,” says Meyer. “Or if you made a great play and put down an opposing player with a particularly hard hit, he would describe you as ‘a rolling ball of butcher knives.'”

Bellard did install the wishbone offense at Westfield. Before his arrival, the team “had a lousy record.” In his first year, they won district and went to the state high school playoffs.

“He was a good soul,” recalls Meyer. “Very competitive, and boy did he love football.”