The Ivory Coast, the Africa Cup of Nations, and Why You Don’t Want a Golden Generation in Football 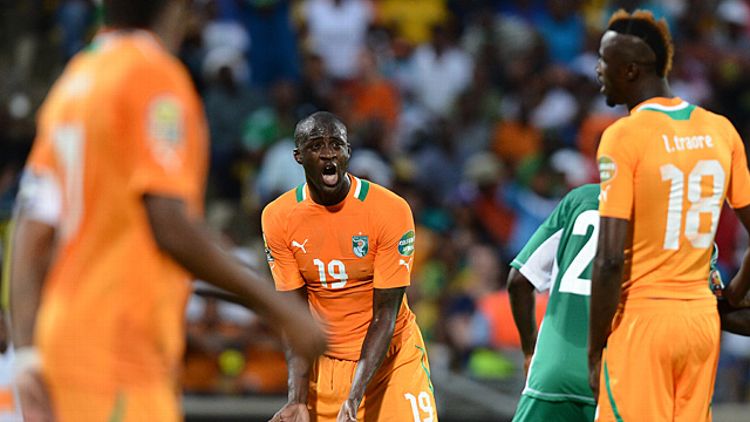 The man who once stopped a civil war was helpless to stop a ball.

It wasn’t just Didier Drogba. Everyone in an Ivory Coast shirt was helpless. Nigerian midfielder Sunday Mba’s 78th-minute run from midfield ended with him running out of options. So he had a shot. The ball took just enough of a deflection off an Ivorian defender to leave the keeper, Boubacar Barry, with no chance.

But even if Ivory Coast’s 2-1 elimination loss to Nigeria in the Africa Cup of Nations over the weekend was surprising as an upset, it should have been predictable as an inevitability. If not that match, then maybe the next or the next would have seen the Ivorians out. Ever since losing the 2006 final to hosts Egypt, Ivory Coast has been the heavy pre-tournament favorite for every ACoN. And each time it has failed to win.

If there was anything special about Sunday’s 2-1 defeat, it’s that it was mercifully bland, as the Ivorians have been involved in some of the most dramatic penalty shootouts in recent football history.

The country’s only title came in 1992, with an 11-10 shootout win over Ghana. A 12-11 quarterfinal victory over Cameroon in 2006 — remarkable in that it featured all 11 players on each side making their kick, meaning a second trip through the order was required (Samuel Eto’o missed, Drogba did not) — was followed by relatively tame, but still crushing, 4-2 PK loss in the final to Egypt. Maybe the most excruciating of them all was last year’s 8-7 loss to Zambia (again in the final). Watching Gervinho walk up to the ball for the 17th penalty — one he clearly has no desire to take — is torture (unless you’re either inherently evil or Zambian). It’s all the more tragic that the keeper went the wrong way, and simply getting it on frame would have won the ACoN.

But he didn’t (and Gervinho hasn’t been the same player since), and Mba’s shot went in over the weekend, and, combined with a 2010 World Cup when then-manager Sven Goran Eriksson seemed content playing for a draw in the opening match against Portugal, knowing that everyone in the group would beat North Korea, and a tie would likely take your fate out of your own hands, all of this means that Ivory Coast’s Golden Generation — the core group of Drogba, Salomon Kalou, Kolo Touré, Yaya Touré, Emmanuel Eboué, Arthur Boka, and Didier Zokora — will likely finish their international careers having won nothing.

Here’s the thing about Golden Generations: If history is any guide, you probably don’t want to have one, unless, of course, your country enjoys basking in failure.

The Portuguese brought the term into the contemporary football lexicon after winning the 1991 U-21 world championships. Luis Figo, Jorge Costa, João Pinto, Rui Costa, Abel Xavier, Conceição were given the aureate christening by the national media. But those teams didn’t just win nothing over the next dozen-plus years; they really explored the craft of disappointment.

They missed out on qualification for the 1994 and 1998 World Cups by a combined two points. The latter instance was almost performance art. In a critical qualifier against Germany, Rui Costa received a second yellow card after sauntering to the sideline a bit too casually for the referee’s liking. So instead of being subbed out, Rui Costa got expelled. Germany went a man up. Five minutes later, they leveled at 1 and denied Portugal the two points that might have given them the group.

In 2002, Portugal were sexy picks to win it all until they were three goals down to the United States before their Cup was barely half an hour old. The Iberians’ group matches were bookended by an equally stunning loss to co-hosts South Korea. They finished third in a group they should have won handily.

The final of the 2004 Euro was seen as their shot at redemption and their last shot at a trophy. But Figo was the only starter left. Being the lone link to the past couldn’t make up for the collective failures. Plus they lost to Greece anyway — at home. It’s still baffling.

At least Portugal was never embarrassing. Heck, if not for some questionable officiating in the 2000 Euro semi, they make another final. But the next most famous Golden Generation is probably most famous for shopping.

England’s 2006 stay in the spa town of Baden Baden, Germany, turned into more of self-described “circus” of WAGs (that’s “wives and girlfriends”), late nights out, and credit card totals than with trying to win soccer matches. That a team takes on the personality of its coach isn’t too surprising. But that’s probably not helpful when your manager is Sven Goran Eriksson (and fun we see that name again).

After Jamie Carragher retired from international football, he retold the story of Eriksson’s reaction to concerns that some girls that had made their way to players’ rooms before a World Cup qualifier. Said Carragher, “Eriksson summoned us for what we expected to be a stern warning. Instead we received some fatherly advice: ‘There’s no need to have girls in the team hotel,’ Sven told us. ‘If you see someone you like, just get her phone number and arrange to go to her house after the game. Then we will have no problems.'”

That is the coach of a national team, and that is priceless. That it’s England only makes it priceless-ier.

Anyway, in 2006 England was eliminated on penalties (to Portugal, curiously, thanks partially to some fine dick-stomping work by Wayne Rooney) and the stain of Baden Baden stuck so thoroughly to the Three Lions’ identity that the narrative for South Africa 2010 became “Hey, this time we’re isolated and don’t even know if our wives are buying designer shoes.”

Of course, swinging the pendulum so far in the other direction doesn’t matter when petulance means never having to learn from your mistakes. Instead, John Terry started holding press conferences in an attempt to alleviate manager Fabio Capello of his line-up picking duties. Note to Terry: Joe Cole is rarely the correct answer to anything.

The Three Lions failed to win an easy group and got run off the pitch by Germany in the knockout rounds.

Say this about England at World Cups, though: They are rarely not the best sideshow. Despite winning just about everything at the club level, the international résumé for this crop of players — one that includes Carragher, Terry, David Beckham, Ashley Cole, Rio Ferdinand, Steven Gerrard, Michael Owen, Frank Lampard, and Paul Scholes — reads:

Yes, Kostas Katsouranis will forever have a winner’s medal from a major international championship, but David Beckham never will.

Sure, Spain is in the midst of a Golden Generation — and they’re winning everything — but it has become one after the fact. Before they picked up the Euro 2008 win, the first trophy of their unprecedented three major tournament run, every analysis of Spain began with the phrase “If they don’t choke …” They might either be the exception that proves the rule, or they might simply be lucky. All the failures of the previous generations meant nobody ever expected anything from any group of Spaniards on the biggest stage. Never having been saddled with expectations — and they weren’t even favorites in 2008 — meant they couldn’t be crushed by them before they were old enough to know how to handle it.

The weekend’s exit of the Ivorian Elephants actually hands the Golden Generation albatross to Belgium. And les Diables Rouges have gotten a good jump on living down to the disappointment. A team that fields Thomas Vermaelen, Jan Vertonghen, Marouane Fellaini, Mousa Dembélé, Christian Benteke, Eden Hazard, Romelu Lukaku, Kevin Mirallas, Simon Mignolet — that’s nine Premier League starters, all of whom (save Vermaelen) are 25 or under, and six of whom are on sides in serious contention for a Champions League spot — already failed to even qualify for last summer’s European Championships. Again, baffling.

If there’s a lesson here, it’s that if you have a Golden Generation, do not let Sven Goran Eriksson anywhere near it.

But more importantly, just do not have a Golden Generation.