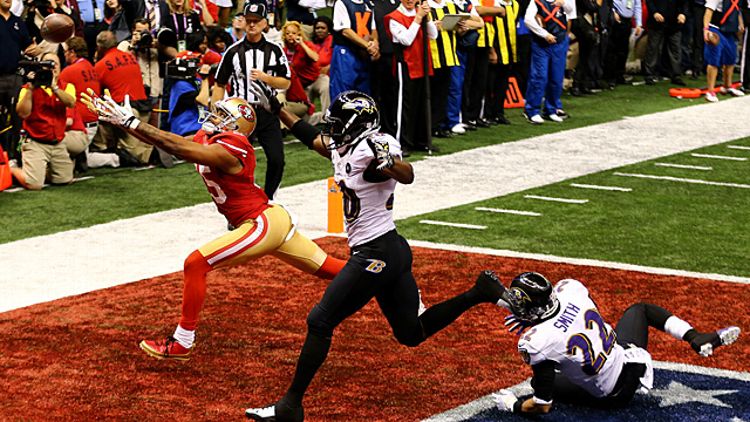 For those of us who grew up with the lopsided Super Bowls of the 1980s, it seems as if we’ve had an unusual run. The past few years of Super Bowls have stayed tight, the result in doubt until the very end. It’s almost miraculous we haven’t had one go to overtime yet, though there have been some some close calls. Despite the early signs of a blowout (and maybe in part because of a brownout), Super Bowl XLVII held the pattern: While the 49ers fell behind 4:18 into the game, and never led, they were only three points down with the ball and a theoretical chance to win, right until Ted Ginn Jr. was tackled returning the game-closing kickoff.

How do you measure the closeness of a game? The final score is one way, of course. But for the viewer — especially the TV viewer who can change the channel — the real test is how long the outcome of the game remained in doubt. One way to figure that out is to ask: When was the last point at which the losing team was within striking distance?

Let’s look at three simple tests for when a game is in reach: the last time the winning team seized the lead for good, the last time the loser was within three points, and the last time the loser was within seven. If a game was decided by three, like Sunday night, that means that by the “within three” or “within seven” test, it was competitive for 100 percent of the game time. If the losing team fell behind four minutes into the game, like Sunday night, and never pulled even again, then by that measure the game was competitive for only 7 percent of playing time. There’s no magic formula, obviously, but if you plot all three together, you can see a trend. In the past 17 Super Bowls — dating back to Super Bowl XXXI (Packers 35, Patriots 21 in 1996) —  the teams have remained competitive until late in the game: 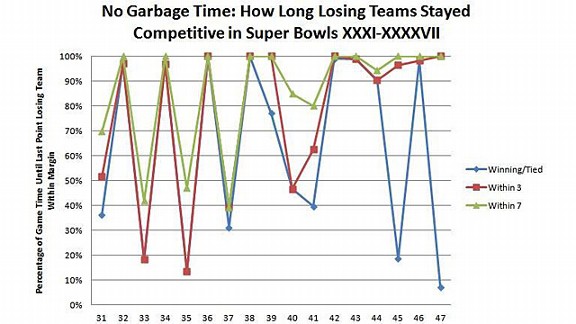 But if you’re older than 30, you know it wasn’t always this way. Super Bowls in the 1980s and early 1990s, especially those lost by the Bills, Broncos, and Dolphins, were often as lopsided as early as a Mike Tyson fight. (This was back in the days when Tyson was cold-cocking his opponents 90 seconds after the bell. You could order a beer and miss the fight.) 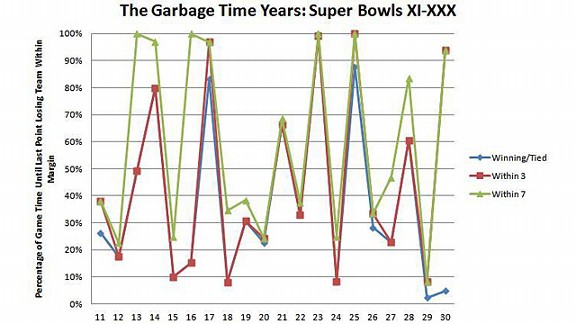 In the years from Super Bowl XI (Raiders 32, Vikings 14 in 1976) to Super Bowl XXX (Cowboys 27, Steelers 17 in 1995), the lead changed hands in the fourth quarter just four times in 20 Super Bowls, and in the second half only six times. In more than half of those Super Bowls — 11 out of 20 — the losing team was behind by more than a touchdown for the entire second half. In 15 of those 20 games, the losing team was never within a field goal in the fourth quarter. A whole generation of casual football fans grew up conditioned to the idea that the Super Bowl is about beer, buffalo wings, the Bud Bowl, and crummy football.

Mismatched conferences were obviously part of the problem. Between Super Bowl XVI in 1981 and Super Bowl XXXI in 1996, the NFC won 15 times in 16 years. The 49ers, Giants, Redskins, and Cowboys went 13-1 in those 16 Super Bowls, while the Bills, Broncos, Dolphins, Patriots, and Bengals went 0-13. The Bengals’ two losses and the Giants-Bills Super Bowl were close, but most of the other matchups were blowouts. Even more so than regular-season results, it was this period that elevated the league’s mantra of “parity” to a moral imperative. That ghost was only truly exorcised when John Elway and the Broncos — losers of some of the worst fiascos — won consecutive Super Bowls in 1997 and 1998.

The first 10 Super Bowls took a while to get going: Joe Namath’s Jets in Super Bowl III were the first AFL team to have a lead in the Super Bowl, and Super Bowl V was the first in which the lead changed hands. Super Bowls V through X at least produced their share of late drama, more than in the 1980s but still a lot less than the past few years: 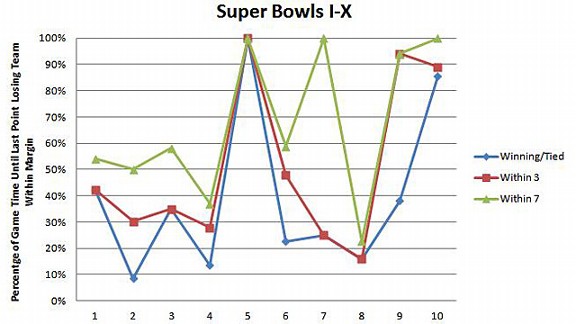 You can see the trend toward closer games evolving over time if you take each of the three measures and plot them on a graph against a trendline. The tendency of Super Bowls to stay within three or seven points late in the game is even more pronounced than the tendency to have the lead change hands. There have been a number of games like Sunday night when an early lead held up under sustained, nerve-wracking assault: 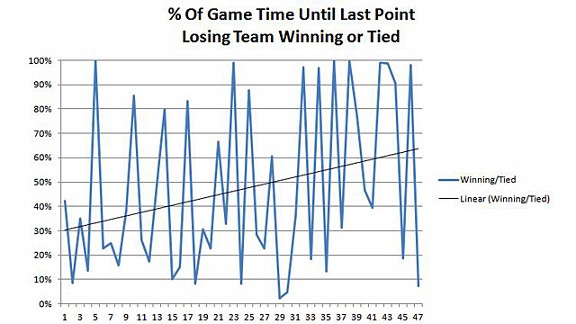 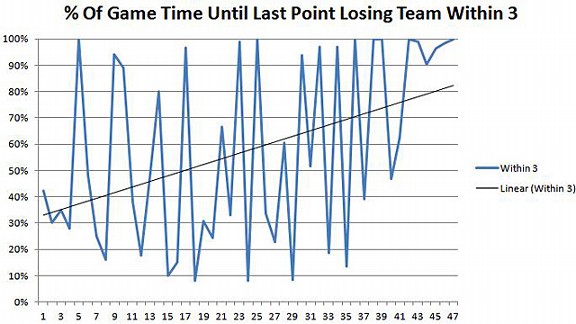 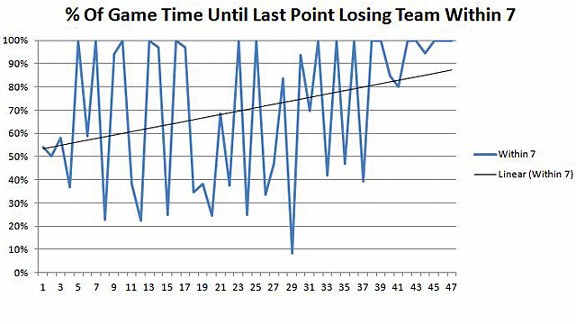 These are not, of course, the only ways of measuring the closeness of a game; there are a number of sophisticated measures of odds to win at various points in time. And it’s true that you might prefer a game that is neck-and-neck the whole way to one that is lopsided early but features a furious late comeback. But that is a matter of taste as much as anything. Looking at the scoring patterns, it is clear Super Bowls have become more competitive. We should enjoy that now because the game never stands still, and the trends that have given us these games could turn out to be as much luck and transient conditions as inevitable historical forces. We could just as easily have another run of blowouts, in which case we will look back on the past 17 years as the Super Bowl’s Golden Age. Don’t say nobody told you to enjoy close Super Bowls while they last.