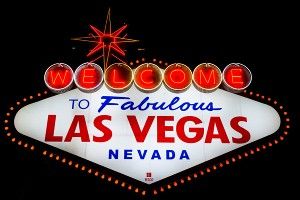 Super Bowl weekend was the one annual event I’d missed during my year in Las Vegas. I’d managed to take in every other special time in town: New Year’s Eve. Independence Day. The World of Concrete convention. All of them, observed and processed. But I covered the Giants-Patriots Super Bowl from Indianapolis, and so I simply had to return to Vegas and fill in that missing weekend. As I’m sure many of you know if you’ve spent any time in Vegas, there is no steady, flowing story to take away from the weekend. A bunch of events happened, and they ranged from wildly exciting to downright tragic. Here, in roughly chronological order, are a few thoughts about what I saw.

• The UFC show had virtually nothing to do with “Super Bowl weekend.” For years now, the UFC has run a show on the Saturday night before the Super Bowl, and it’s often been one of their bigger shows of the year. This year’s event wasn’t quite as notable — it seems overshadowed in a way by the upcoming pay-per-view headlined by women’s champ and supreme shit-talker Ronda Rousey, which should be a fascinating experiment — but it had the promise of an all-action Jose Aldo–Frankie Edgar title fight. And, besides, it seemed like the natural thing to do the night before another enormous sporting event.

I was totally taken back by just how little resemblance the crowd had to the Super Bowl–tourist crowd I was expecting. I didn’t see anybody in a 49ers or Ravens jersey, which shocked me. What I did see — and more notably, hear — were a staggering number of Brazilian fans. It’s not a surprise that Brazilians would come out to support a legendary fighter like Anderson Silva, but they were instead out in throngs to get behind their countrymen: Aldo, Antonio Rogerio Nogueira, and Antonio Silva. It was a crowd of people who came to town specifically for the UFC, not for the Super Bowl.

• Brazilians are still great at fighting. Those Brazilian fans had a dream night. In the main event, Aldo did just enough to earn a decision victory over Frankie Edgar, who ended the night with a bloodied nose and a hematoma swelling his eye shut. Edgar is some modern MMA take on a seemingly endless line of tough-as-nails Northeast boxers; in another life, he would have been the unstoppable king of the Rhode Island Auditorium in the mid-’60s, spending his salad days as the after-dinner speaker at a million banquets in a million Polish-American halls. Edgar gave Aldo his toughest fight on American soil, but Aldo’s such an incredible freak of nature as a striker that even the boundless defenses of Edgar weren’t enough.

Aldo was a comfortable favorite, but the two other Brazilians in prominent fights on the show pulled off pretty astounding upsets. Truly shocking was Lil Nog’s victory as a +400 underdog over Rashad Evans, who looked strangely disinterested in the fight involving him. Nobody can doubt Evans’s ability to check 8 billion Nogueira jabs that weren’t close to connecting, but Evans was too distracted by the constant stream of jabs to ever actually attack; his most aggressive move of the entire fight was trying to throw a punch after the bell at the end of the fight. Ref Yves Lavigne actually did an impressive job of steering Evans’s punch away from Nogueira; it might have been the most athletic movement in the entire match. I did enjoy Evans’s shorts, though, which highlighted three health and nutrition sponsors and then, on the side, Corn Nuts. (Did you know that Corn Nuts are the official corn nut snack of the UFC?)

Antonio Silva’s brutal knockout of Alistair Overeem, though, was both the highlight and the lowlight of the show for UFC. It’s already a heavy favorite for Knockout of the Year — from my vantage point, it looked like Silva knocked Overeem out on his feet with a shot to the temple, woke him up with another combination, and then knocked him back out and onto his ass with a third shot — and the image of referee Herb Dean having to use every single ounce of his strength to pull a furious 265-pound Silva away from Overeem’s prone body only makes things more memorable.

In terms of business, though, the Overeem knockout was a huge blow to UFC. Overeem’s charisma is off the charts, and as a striker with a long winning streak stretching across promotions in Japan and the United States, he had the credibility to become the next contender to Cain Velasquez’s heavyweight title. Now? Overeem’s just a guy who got mysteriously large after an uninspiring start to his career in Japan, a guy whose track record on the biggest stage consists of a victory over a diverticulitis-riddled Brock Lesnar and a failed drug test that saw him try and drive away from the random, unannounced test in the hopes of avoiding the test altogether. Silva’s knockout was the most impressive moment of the show, but it cost Overeem — and the company — millions of dollars in a future title fight. Silva was annihilated himself by Velasquez last May, leaving no obvious challenger for Velasquez going forward.

• I spend an inordinate amount of time picking out what my music would be for specific athletic situations that I will never, ever engage in. When Rashad Evans came out to “Put Your Hands Where My Eyes Could See,” I spent about 20 minutes trying to figure out what my UFC walk-up music would be, a sentiment shared by NBC’s Aaron Gleeman. The saddest part about the whole thing is that I don’t remember what I picked and will have this same conversation in my head the next time I watch a UFC show. And then again and again and again. This also comes up with regard to my walk-in music if I were a closer. I’m 28. I should not be thinking about this stuff anymore.

• Casinos treat Super Bowl weekend like everybody just got paid. Yeah, this one seems obvious, but it was truly staggering to me to see just how expensive gambling became during Super Bowl weekend. At the Mandalay Bay on Saturday night after the UFC show, the minimum bet for an entire pit of blackjack tables was $50. At the Venetian, I saw a pit on Sunday afternoon that was all $100 minimums, with the occasional $500 and even an occupied $1,000 minimum bet table. That’s a three-four times markup.

• The Venetian sportsbook is a lot of fun. It was my first experience watching a game in the Venetian book, which is one of several similar-looking books around town owned by Cantor Gaming, and you can’t deny how fresh and new everything in the book feels. It has that “This is the future of sportsbooks” feel to it, both in how it looks and what sort of betting it offers. The in-game and in-drive betting was enormously entertaining, although I don’t think that my already meager skills at sports betting can offer much insight as to whether it makes sense to bet on a given drive at second-and-10 ending with a punt or a field goal try. In-game props like the number of rushing yards Frank Gore would finish with or the rapidly changing team money lines seemed more exciting and palpable in terms of extracting value. What makes it all truly exciting, though, is being able to make those bets from your seat on the touch-screen in front of you. Wait, did I say exciting? I meant terrifying. Terror can be exciting sometimes.

• They might have a special sort of love for a particularly cheesy ESPN programming staple. As the Super Bowl started, virtually every inch of the big screens in the Venetian book were tuned to the biggest gambling event of the year. Makes sense, right? Two televisions, though, were tuned to a different sort of sporting event. A stray NBA or NHL game for a whale? Nope. A horse race from some warmer climate? Not that, either. Airing on two televisions was, instead, coverage of the World’s Strongest Man competition. It actually made it part of the way through the first quarter, too. This raises so many questions. Was somebody betting big on World’s Strongest Man? On a particular athlete? An event? Does Cantor book odds on World’s Strongest Man? And how many college students have put together World’s Strongest Man drinking games throughout the years? Important.

• Watching the Super Bowl is very different from watching any other football game in a sportsbook. Watching an NFL game in a book is, as I’ve written, different from watching a game on TV anywhere else. That’s one degree of separation. Watching a game with 400 props riding on it? That’s another universe. Do you remember the opening play of the game? It was a completed pass to Vernon Davis over the middle. That brought in a number of different props as winners: first Niner to catch a pass, the result of Colin Kaepernick’s first pass attempt, and the team to produce the initial first down, among others. As cheers went up in the crowd, the “flag” graphic appeared on the screen. Now, you remember that Vernon Davis lined up illegally. And yes, all the people who were cheering and thought they had won their bets were wrong. The 49ers would go three-and-out, and the Ravens would produce the game’s first, first down. Colin Kaepernick’s first pass attempt would fall incomplete, not complete. And Michael Crabtree would make the 49ers’ first catch of the game, not Vernon Davis.

One of the heaviest-bet props is “Which player will score the first touchdown?” which led to comical scenes during that opening Ravens drive. Anquan Boldin would eventually score that touchdown, but on an earlier play, Joe Flacco scrambled and began to look toward the end zone, which produced a cacophony of people shouting out their preferred receiver like they were shouting song requests at a band. “Pitta!” “Torrey!” “Free Bird!” The bands never listen, either.

• The power outage didn’t really seem like a big deal in the sportsbook. You might infer that panicked bettors would think that they might somehow get screwed out of a winning ticket and riot upon the first sign that something was up with the credibility or outcome of the game, but everybody in the Venetian book seemed extremely calm and more amused than anything else. Of course, drink service continued during the power outage, which often helps these things.

• It was weird to see people who were happy/sad for their team who had the opposite reaction for their bets. In most cases, the people in Ravens jerseys were overjoyed and the people in 49ers jerseys were downtrodden. That seemed obvious. I saw at least a couple of people in 49ers jerseys, though, who seemed very happy with how the day had gone, and the opposite was true for Ravens fans. Is it kosher to bet against your own team in the Super Bowl under the logic that you’ll be happy with either outcome? I’m guessing that they hit or didn’t hit their props, but it raised an interesting moral question to me.

• The intentional safety. I’m still not ready to talk rationally about that yet. Ask me again in two months.