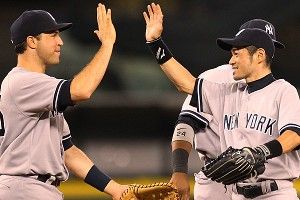 It’s hard to describe the feeling of seeing Ichiro in a Yankees jersey without using words like “elated” and “schadenfreude.”

Elated because he’s Ichiro, the iconic Japanese import with a natural hitting prowess we haven’t seen since … Pete Rose? Consider this — I wrote a post in April about Derek Jeter’s outside chance of catching Pete Rose on the all-time hit list. He’s ahead of the curve for now, even if his late-career production is unlikely to keep pace. Anyway, since 2001, when Ichiro first came into the league, Jeter has 2,204 hits. Ichiro’s total in that same span is 2,534, for a difference of 330 hits between him and the guy who might set the MLB record. And Ichiro is nine months older! I mean … that says it all, right? With a full career on American soil, I’m convinced he’d be on the verge of topping Rose and becoming the greatest hitter in history. You always want a guy like that on your side.

And schadenfreude? Well, that’s a bit more shameful. I know I should feel for Seattle fans after the SuperSonics-to–Oklahoma City saga and the recent struggles of the Seahawks and Mariners. And, sure, the Yankees have beat the Mariners in every big game since the ’95 divisional series. But man, that was the year they deprived Donnie Baseball of a shot at the Series in his only playoff run! More recently, they keep screwing us on the trading block. We thought we were getting Cliff Lee two summers ago, and then they traded him to Texas. Lee went on to pitch an eight-inning, two-hit gem against the Yankees in the disastrous ALCS that year. This past summer, we dealt the potentially great Jesus Montero to the Mariners for Michael Pineda, who — surprise, surprise — turned out to have a season-ending shoulder problem. And I’m too young to remember the awful Ken Phelps–for–Jay Buhner trade in 1988, but not too young to remember the damage Buhner wrought later in his career.

Also, if I’m being totally honest, Seattle has a smarter set of fans — collectively, anyway — than the Yankees, and they know it. I resent their intellectual superiority and all their good blogs, and I get the sense that they see Yankees fans as a bunch of spoiled, boorish morons who roll out of bed, drool into a saucer, and grunt the days away as they watch their team win championships. They hate us, so I enjoy seeing them fail. There, I said it. (See? Even a good team has bitter fans.)

So I hope you can forgive the pettiness, but I was excited to see Ichiro in the Yankee gray for purely vengeful reasons. The fact that he was playing his first game in Seattle, a circumstance that as far as I’m aware has never happened with a player of this magnitude before, was icing on the cake. I let my excitement show, but a lot of people on Twitter immediately sought to dampen my enthusiasm with a variety of buzz-kill arguments. Jonah Keri handled most of these misconceptions, but I’d like to milk the stats a bit on one particular hater hobbyhorse.

Yeah, he’s not the same great hitter we remember from his prime, and his current line of .261/.288/.352 is pretty bad. But hold the phone for a second. Now put it down. Put the phone down. Let’s look at his righty-lefty split. With the news that Brett Gardner’s rehab took another hit, the Yankees needed someone in left field to provide a bit of platoon pop in the bottom of the order against right-handed pitchers. Andruw Jones is Johnny-on-the-spot against lefties, and Raul Ibanez is a poor fielder who fits better at DH. So, Ichiro against righties? .278/.317/.408. Still not great, I grant you, but not quite as terrible.

But we’re not done yet. I was directed yesterday to a piece by Eric Seidman called “Yankees Hope They Acquired ‘Road’ Ichiro.” And would you believe it? His line away from Safeco Field, a miserable expanse of unending grassland for hitters, is .296/.313/.399. Starting to get interesting, right? The OBP is poor, but Lord knows the Yankees could use the hits with runners on base.

What if we combine the two? After Wednesday, he won’t play another game at Safeco, and he probably won’t face another left-handed pitcher. Removing the unfavorable elements is fair, right? I turned to John Fisher at the ESPN stats department, and lo and behold, this is Ichiro’s line on the road against righties: .322/.349/.476!!!!

And who knows? Maybe he’ll get a psychological bump from moving to a contender. Did I just talk myself into Ichiro as a .330/.370/.500 guy? You better believe it.

(Also, want me to really blow your mind on the Safeco effect? The Seattle Mariners have scored the fewest runs in the major leagues at home. On the road? They’ve scored the most. Note to future owners: When you build a new park, make it a bandbox. Unless you hate your team, like the Wilpons.)

My revenge motive aside, one thing that really shocked me about the trade was how damn benevolent it all seemed. Last night, I listened to Mariners GM Jack Zduriencik in the booth with Dave Sims and Mike Blowers on the hometown feed. His story, which jibes with everything else we’ve heard, is that Ichiro wanted out, came to him with the request, and the front office simply honored the wish in the least complicated way possible. Not there aren’t a few other angles; Ichiro may have been blocking prospects, and this trade definitely bypasses what could have been an ugly free-agent fiasco when the season ended. But as much as possible in a business like baseball, this was a benign trade for both sides, with Seattle honoring the wish of a legend who gave them so much in the past decade. “When a guy like that says he wants to play for a contender, you honor that request.” Enough said.

Then I asked my friend Spike, a die-hard Mariners fan, how it felt to see Ichiro in a Yankees uniform. All he could muster during the initial shell shock was, “Weird,” but he came around to Ichiro’s side too. He was rooting for that first base hit, and he got misty when Ichiro took a bow to both sides of the stadium, revealing the gray hairs — and by extension the history that made them — beneath the helmet. The Mariners fans in attendance gave him a standing ovation, and then, because he’s Ichiro, he slapped a single up the middle.

He’s capable of turning on a ball and viciously ripping doubles down the line in right, but this was the classic version of the swing that baseball fans of my generation will remember long after he’s gone. This was quintessential Ichiro, player-as-dancer and Major League Baseball’s answer to a cricket player, where it seems like he deflects the ball more than he hits it. I’m not afraid to call it beautiful, and its pure unconventionality suggests, or even insists, on the genius behind the method. More than any other ballplayer, it feels like Ichiro’s bat flows out from his hands as an energy extension of the body, smooth and fluid. It’s a pleasure to see a guy like that playing for your team, even in the sunset of his career.

Ichiro himself was all smiles. As I listened to the YES Network’s David Cone speak about the “look on his face” and the “bounce in his step,” and say that Ichiro “couldn’t help but feel rejuvenated,” I thought maybe he was playing the Yankees homer, at least to some extent. But then I flipped to Blowers and Sims, and they were talking the same game. “It’s something he might need in his career,” said Sims. “Put it this way,” Blowers agreed, “it ain’t gonna hurt him.”

Ichiro’s words beforehand reflected the same sentiment. This was my favorite quote: “I’m going from a team having the most losses to a team with the most wins, so it’s been hard to maintain my excitement.” I know you didn’t mean maintain there, Ichiro, but we get the point. And you can say whatever the hell you want.

Watching the fans in Seattle was a little heartbreaking. First of all, there were way more empty seats than I might have imagined. How can you miss that game? For those who showed, signs like “Sayonara, Ichiro :(” and “Thanks Ichi!” were enough to evoke pity. But most touching of all was the Ichi Hit Counter, which changed from 105 to 106 after the single, new uniform be damned. Overall, though, I barely sensed any anger. It’s the mark of an intelligent fan base when they can understand that despite the pain of losing a legend, it was the right move.

So now that legend has a new team, a new number (Bernie Williams wore Ichiro’s previous 51, which is now unofficially retired in the Bronx), and maybe a new swagger. When he snapped off his elbow pad at first base, chatted with Mick Kelleher near the bag, and prepared to swipe second, you could tell that his story wasn’t quite over. His memory will persist in Seattle, but there’s at least one more chapter waiting to be written in New York. Oddly enough, both sides can appreciate what they’ve had and what’s to come. It’s a rare case where both fan bases are grateful, and since the Mariners have seen the last of him, I’ll give my pal Spike the last word: “I mean, two years ago this would have been brutal. But now? He gets a chance at a ring, and it won’t [get] ugly here. Which is nice.”