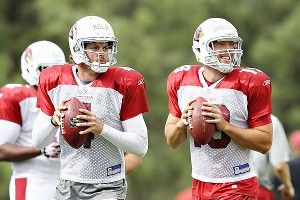 With NFL training camps opening today, it’s about time we touched on what is inevitably going to be the biggest story line of the next few weeks. We’ve known for a while that one quarterback battle is set to dominate the news as teams prepare for the regular season. One QB has already been a star in New York City, and the other was once a highly talked-about backup who shined in his only few starts before leaving his former team. It’s the matchup everyone has been waiting for, and now, it’s finally here:

OK, so John Skelton was a star at Fordham and Kevin Kolb was already given his chance as a starter for the Arizona Cardinals and was an utter disaster. But still, it’s this, and not what’s going on in New York, that’s set to be the most entertaining position battle of training camp. As coach Ken Whisenhunt told NFL.com, “Both of the guys, at times, have shown they can do it. So, it’s going to be a matter of showing consistency for a period of time over training camp, but it’s going to be an interesting battle.” It sure is, Ken.

Kolb is in the second year of a five-year, $62 million contract that gave him $21 million guaranteed, and Skelton is a fifth-round project from a D I-AA. Skelton threw 14 interceptions in his seven starts last year, but those seven starts ended in five Cardinals wins. Kolb managed to throw the ball to the other team less, but the Cardinals were just 3-6 with him under center.

Whisenhunt has said that the Cardinals’ financial obligation to Kolb won’t play into who wins out in the desert, and that’s good to know. I wouldn’t want any outside factors sullying the integrity of what should be a true battle of wills. The next few weeks are set to have everything we want out of training camp: stakes, drama, terrible facial hair. I can’t imagine why Hard Knocks didn’t go all out after Arizona. This is must-see TV.

Video: Ichiro Comes to America in 1995