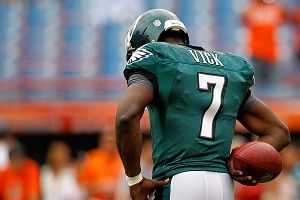 Never Trust a Body Armor Salesman Who Talks Like Gandalf

As a Philadelphia Eagles fan, can I just briefly take a break from recording my solo album, The Anthology of American Foles Music, to say that very few things matter to me more than the safety, comfort, and protection of Michael Vick’s general ribsectional-chestal area (Chris Ryan, Harvard Med, Class of 1930). With that on the record, let me also say that something rubs me the wrong way about Vick’s flak jacket provider.

In a piece on ESPN.com, Rob Vito, CEO of Unequal Technologies (isn’t this the company that was being traded in Boiler Room?), guarantees Michael Vick “will not get hurt” while wearing the company’s “protective gear.” That’s fine, stand by your work, I get it. Not wild about this statement, though: “What Michael is wearing was born on the battlefield and forged on the gridiron.” Unless you’re selling Excalibur, just don’t use the word “forged.”

I’m sorry we didn’t run a Hard Knocks recap this week. I guess we were sticking a little too closely to our No Mary Garrard, No Peace platform. Forgive us. But now that rumors have started circulating (via the Palm Beach Post) that David Garrard will be released from the Dolphins, can we start, in earnest, the campaign for Mary Garrard to be the host of Survivor or a judge on The Voice or a guest star on The Good Wife? Something?

Bill Ford Jr. told the Detroit Economic Club, “We are going to bring you a Super Bowl.” Which is nice for the Economic Club … Scouts Inc.’s Matt Williamson is really high on Russell Wilson (“I think Russell Wilson is going to be great”), but the Wall Street Journal reminds us that he is short and we should not get our hopes up … Chris Cooley got released by the Redskins and is already giving good quote about where he might play … Kenny Britt is going to serve a one-game suspension stemming from his DUI arrest … Norv Turner says Ronnie Brown is going to be picking up the slack for an injured Ryan Matthews (“He could be the guy,” Turner said, reportedly with a smile on his face). (Norv!)