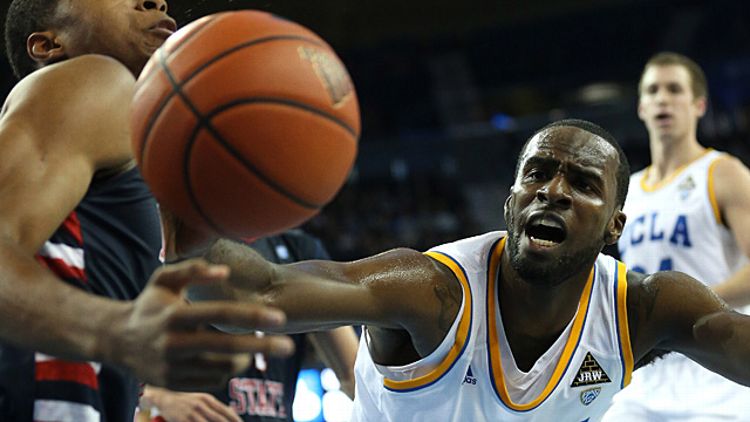 Two weeks ago, when I predicted that Michigan would beat Ohio State on the road, and Minnesota would do the same to Indiana, I was hit with an avalanche of Big Ten fans insisting that I didn’t know what I was talking about, and that IT WAS REALLY, REALLY HARD TO WIN ON THE ROAD IN THE BIG TEN. It was repeated so often that I started to wonder what the hell goes on in Big Ten gyms that makes them so different from everywhere else. Are the visiting players poisoned in some subtle way before the game? Does the home team get an extra player? Do they flash the lights and pump loud metal music into the visitors locker room, like the torture scenes in Homeland? What was this damn mystique?

I really wanted to be cynical about the whole thing — sure, it’s not easy to win on the road, but it’s no harder in the Big Ten than anywhere else — but then Michigan and Minnesota had awful first halves, came up short in their second-half comebacks, and the avalanche quickened. Big Ten road games were like land wars in Russia, said the legions. Then the anti-ACC comments trickled in, and I bunkered down in defense, accepting the Big Ten Road Logic against my better instincts.

Until yesterday. I was emboldened by Northwestern beating Illinois and Michigan taking down Minnesota … ON THE ROAD. IN THE BIG TEN. That gave me the courage to reject the cliche and go searching for truth. And lo and behold, it turns out they keep statistics for this kind of thing, specifically so we don’t have to rely on old wives’ tales. As usual, Ken Pomeroy is the hero of this story. He has the win-loss record of the home teams in every conference (conference play only, lower-left part of the page) dating back to 2003. Pomeroy’s site is subscription-only, but I wanted to share my findings with the huddled masses. Let’s check the major conference records for the last few years, using the home team’s win percentage:

Surprise! From 2009-2012, among the BCS conferences, the Big Ten finished fourth, second, last, and first in home-court advantage. In other words, exactly what you’d expect from a random sample with tightly clustered results. It’s pretty hard to win on the road no matter where you play, but it’s a steady phenomenon that fluctuates between 59 and 70 percent without any correlation to conference. And it’s not demonstratively harder in the Big Ten than anywhere else.

So there you have it, Delany-ites. Road games don’t get tougher just because that B1G symbol is pasted on the court. Great conference, great teams, but no more home-court advantage than anywhere else.

On to the top 10 games of the weekend!

I’m still very confused by the Big 12. Like everybody else, I think Kansas (3-0 thus far) will win, but beyond that it seems to be a mess. What I can tell you is that Oklahoma and Kansas State are the other two teams with perfect records in conference, and the winner of this game will be the presumptive challenger to the Jayhawk throne. I’m open to an Oklahoma surprise, but the team I’m really excited to see is Kansas State. Their only two losses on the year came to Gonzaga and Michigan (both on neutral floors), and they have big wins against Florida and Oklahoma State on their résumé. Rodney McGruder is the leading scorer, but the most interesting aspect of the Wildcats is the fact that they rebound 42 percent of their missed shots (5th in the nation), despite the fact that nobody taller than 6-foot-7 gets more than 15 minutes of playing time. Color me intrigued.

I was disappointed in SDSU’s home loss to UNLV on Wednesday, which was an awful display of missed 3’s, missed layups, and, more importantly, terrible defense. Steve Fisher also seems to be relying more and more on a small lineup, especially in crunch time, which led to a ton of UNLV offensive boards and second-chance points. So despite the aesthetic pleasure I get from watching Jamaal Franklin and Chase Tapley, I’m starting to ask myself if the Aztecs are fatally flawed. Meanwhile, Wyoming hasn’t been seen or heard from since Boise State’s buzzer beater knocked them from the ranks of the unbeaten, and considering their 49-36 loss to Fresno on Wednesday, that might be for the best. But they still have a tough home court, and this should stay close.

Yeah, yeah, both teams are surprise SEC contenders and all that, but seriously, watch Marshall Henderson. Read the text, watch the video, and be bowled over by the crazy. You want to miss any game involving this guy??

I probably shouldn’t be intrigued by this game, but I am. A lot of us thought the comeback win over Florida might be a prelude to a fall from grace for Arizona, since it was 50 percent comeback, 50 percent Gator meltdown, and there were still a lot of unanswered questions about the Wildcats. And when the fall came, it came hard. Three straight escapes against SDSU, Colorado, and lowly Utah led to the first loss in Oregon, and now we’re all waiting to see how far the floor drops. Arizona State, meanwhile, has surprised everyone with three conference wins and a near-upset of Oregon last weekend. Plus, this is a rivalry game at Arizona State. Plus, the Sun Devils have a freshman named Jahii Carson who looks semi-unstoppable at times. Plus, Arizona’s only three road wins thus far have come against Clemson, Texas Tech, and Oregon State. Not exactly the cream of the crop, and I don’t think the team’s talented freshmen have experienced true NCAA road terror yet. Stay tuned.

Here’s the thing about this year’s Big Ten: You don’t want any so-called “easy stretches.” Michigan State is riding four straight wins over Purdue, Iowa, Nebraska, and Penn State, which is fine and dandy until you see the price they’re about to pay for the two weeks of light work: Ohio State, Wisconsin, Indiana, Illinois, Minnesota, Purdue, Michigan. So brutal. If they want to stay anywhere near the top of the Big Ten, the Spartans have to win their home games, and it starts Saturday. The problem I see is that when they play teams with decent defenses (UConn, Miami, Minnesota), they have trouble breaking 60. And OSU’s defense is better than any they’ve seen; Aaron Craft covering Keith Appling potentially takes away the best Spartan scoring threat, and Thad Matta’s Buckeyes will be more than willing to grind it out and take their chances with Deshaun Thomas carrying a heavy offensive load. I’m expecting a very, very low-scoring game that probably won’t be much fun to watch, but should come down to the wire.

This one’s simple. Doug McDermott is great, but in order for anyone to take Creighton seriously, they have to win the hard road games in the Missouri Valley. It’s probably not fair to ask the Bluejays play an entire season without a hiccup, but unfortunately, the next two months don’t give us much to go by. Mid-major fans like me will be watching this one like hawks, and fair or not, Creighton has a lot to lose.

Missouri: Highly overrated, poorly coached, small, playing on the road. Florida: Highly underrated, well-coached, not small, playing at home. We’ve got ourselves a total reckoning game here. The Gators (Kenpom’s no. 1 team, by the way, super-elite on offense and defense) are about to go much higher than no. 10, and the Tigers are destined to drop. Expect a bloodbath.

And since we’re here, let’s ask an important question: Who would win if an actual tiger fought an actual gator? Surely the gator would win in a swamp, but let’s pretend we’re on neutral ground. And let’s also say the two competitors are in a small space, so the tiger can’t just run away if things get bad. The tiger is quicker, faster, and perhaps more ferocious, but how could it penetrate the scaly defenses of the gator? I really have no idea who would come out on top, but when I try to picture it in my mind, the gator always wins.

Mid-major heaven! And the great thing is, you’ve got Cinderella from each side of the American cultural spectrum. Butler is the clean-cut, All-American Midwest squad playing slow, old-fashioned basketball with a focus on muscular defense (see: Milan High School), and Gonzaga is the long-haired counter-culture outfit from the Pacific Northwest playing fast-and-free with an emphasis on scoring (see: The Mighty Ducks?). It’s like Johnny Unitas versus Broadway Joe all over again, except these teams are both subversive. They’ve become symbols of the all-consuming national impetus, from both the left and right, to stick it to the elites. It’s Joe the Plumber against Occupy Wall Street. America!

So, so excited. As I’ve mentioned before, I’m in a stock market NCAA hoops pool where you can buy/sell/short teams based on how you think they’ll fare throughout the season. One of the catches is that for the BCS teams, you only get dividends for wins during conference season. One of my smartest moves so far was buying up a ton of Oregon stock before they began their 4-0 Pac-12 tear that included a win over Arizona. One of my dumbest moves was shorting the hell out of UCLA in early December, thinking that the shaky start was symptomatic of another Howland Mega-Meltdown rather than the growing pains of a very talented team with a lot of freshmen. Now, the Bruins have started 5-0, and I’m paying out dividends hand-over-fist. Needless to say, I’ve got a lot riding on this game. And as opposed to the one above, it should actually be a lot of fun. On one side, you’ve got Oregon’s balanced attack, with five players averaging double figures; and on the other, you’ve got two of the country’s best freshman scorers in Jordan Adams and Shabazz Muhammad, who, by the way, has officially shaken off any and all cobwebs and is now the player we all thought he’d be. And if that’s not enough, both teams like playing uptempo. Count me in.

Due to a weak nonconference schedule and an easy start to the Big East, Syracuse remains the country’s biggest mystery. Think about it: When you hear Syracuse, what’s the first thought from this year that pops into your head? The answer is Jim Boeheim’s 900th win, or his 901st win, or his 904th, or whichever one moved him into second all-time behind Coach K. You hear less about the stellar passing of Michael Carter-Williams (bottom of post), or C.J. Fair’s scoring, or Rakeem Christmas’s strong interior defense. (Although, in what’s becoming an annual tradition for Syracuse, you do hear about another key player being suspended.) That’s because the team’s strongest win so far, besides a weird aircraft carrier game against SDSU, is probably a November road game against Arkansas. Meanwhile, Louisville is all up on our radar. They’ve played a tough schedule and lost just once, to Duke, without Gorgui Dieng. Russ Smith may be the best player in the country, the whole team plays brilliant defense, and with a coach like Rick Pitino, I’d be fairly shocked if they don’t make the Final Four. With ‘Cuse missing James Southerland, I don’t see how they can score enough to beat the Cardinals on the road, even with a monster game from Carter-Williams.

What is Louisville’s one weakness? They lack 3-point shooters. And what is Syracuse’s specialty? The zone. Which means that despite everything, Boeheim could pull off something strange in Kentucky. And if there’s one thing we’ve learned about Jim Boeheim — from a data set that now includes 900+ wins — it’s that he wins, and loses, when you least expect it.