The Giants’ Peavy-Hudson Muscle Car and the Mid-rotation Edge 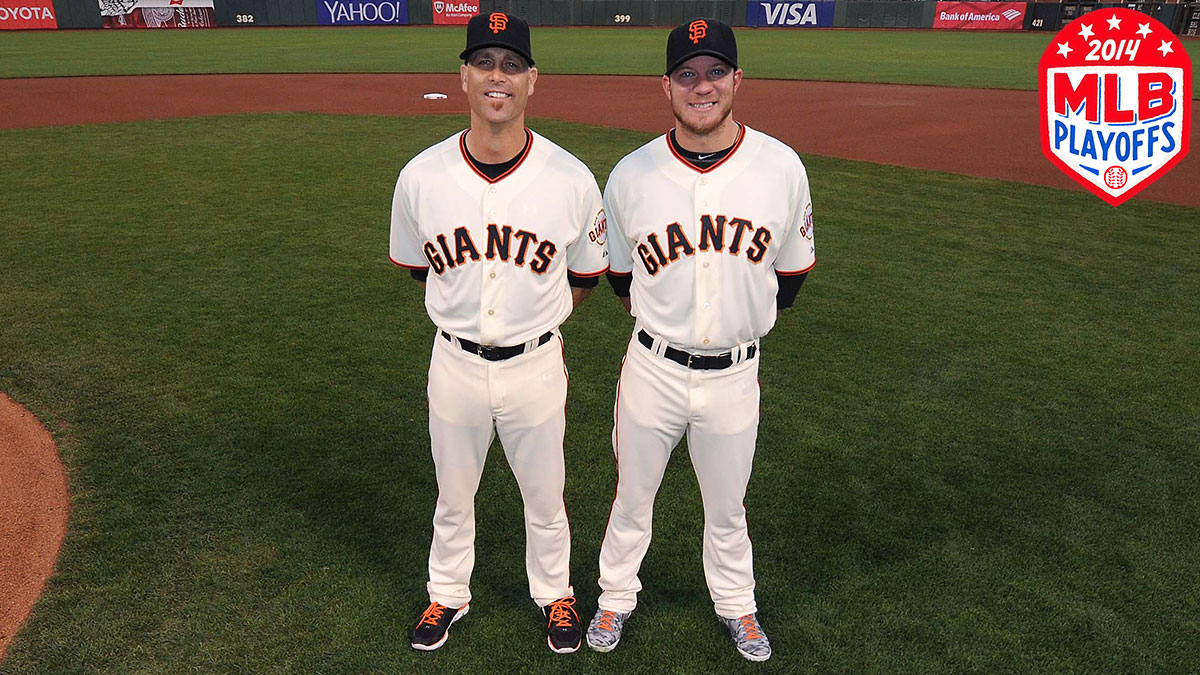 There’s no perfect way to build a playoff rotation. Great rotations have been losing World Series since 1906, when the Cubs had five starting pitchers with an ERA+ of 140 or better, including Three Finger Brown, who went 26-6 with a 1.04 ERA. Those Cubs went 116-36, which is about how you’d expect a team with pitchers like that to perform, but lost the World Series to the White Sox in six games.

Nevertheless, the starting rotation is where we look first to discern the minute differences that can determine the outcome of something that resembles a coin flip as much as a World Series does. We saw that in the Giants’ 7-1 Game 1 win over the Royals, as two pitchers of similar quality delivered wildly divergent results, with Madison Bumgarner dominating for seven innings and James Shields looking like he might still be passing a kidney stone.

All of our postseason coverage!
And more than any other comparison — Buster Posey vs. the Royals’ running game; the Giants’ lineup vs. the Royals’ bullpen; the Giants’ mojo against the Royals’ momentum — the starting pitching matchups in Games 2 and 3 will determine the winner, particularly if the series advances and we see rematches in Games 6 and 7.

The Royals and Giants have similar rotations in spots 1 and 4: Bumgarner vs. Shields and Jason Vargas vs. Ryan Vogelsong are fairly even matchups, and remain so despite Bumgarner steamrolling Kansas City on Tuesday night while Shields took a huge step toward shedding the annoying sobriquet he stole from James Worthy.

The other two parings, Jake Peavy vs. Yordano Ventura and Tim Hudson vs. Jeremy Guthrie, are where this series will be decided.

There was a time, back when Bumgarner was in high school, when a team could ride a playoff 1-2 of Peavy and Hudson1 to the World Series the way the Giants once rode Tim Lincecum and Matt Cain. Nowadays, those two don’t come close to representing their no. 1 starter peaks, which leaves a bit of a hole for San Francisco behind Bumgarner. Even so, starting Peavy and Hudson is like driving a classic muscle car: It may not be as fast as it once was, but it’ll still get you where you need to go.

Contrast that to Ventura and Guthrie, both of whom are very high-variance, to put it nicely. In Ventura’s case, he’s got knockout stuff, and I love him to pieces, but he’s a 23-year-old in his first World Series start. He’s also a 180-pound rookie who’s already thrown more innings this season than ever, and who’s sandwiched one good LDS start between a relief appearance that almost cost the Royals the wild-card game and a four-run start in the LCS that would probably not be good enough to beat Peavy.

Guthrie, on the other hand, is just plain bad. I mean, in absolute terms, he’s not awful in a big park, but he’s a 35-year-old who’s never been anything more than a mid-rotation innings eater, most of the time for bad teams. There’s not a starting pitcher in this series I’d less like to have on the mound in Game 7, including Danny Duffy, who was getting the Shelby Miller treatment in a stacked bullpen until he was called in for mop-up duty in Game 1.

The variance in Guthrie’s case is not whether he’ll throw eight innings of one-hit ball or not make it out of the first, as is the case with Ventura. The issue with Guthrie is whether Ned Yost will take him out before he has the chance to get into trouble. Yost did so in Game 3 of the LCS, in which Guthrie somehow threw five innings of one-run ball, after which Yost lifted him.

That’s the best-case scenario for Guthrie: get through the order twice, more or less (he faced 20 batters in his LCS start), without getting lit up. Consider the depth of Kansas City’s bullpen: The Royals have three near-unhittable relievers, one of whom, Kelvin Herrera, has been used fairly routinely this postseason for more than an inning at a time. And that’s not counting Jason Frasor or two other multi-inning options in Duffy and Brandon Finnegan.

Kansas City’s bullpen depth has allowed Yost to manage his pitchers extremely aggressively, and considering that this would-be seven-game series comes with two rest days and nothing to play for afterward, there’s no reason to hold back. Whether Guthrie can keep the Royals close during two trips through the order is another question, because if he can’t, the Giants could already be well out in front by the time the bullpen takes over.

Whether Kansas City’s unpredictable mid-rotation can overcome Peavy and Hudson is one of dozens of questions that will decide whether the Royals continue their impression of the 2001 Lakers, who lost Game 1 of the Finals at home before recovering, or turn into the 2007 Rockies, who won 21 of 22 games to reach the World Series and then got swept. But it’s also the one question with the potential to swing the series on its own.