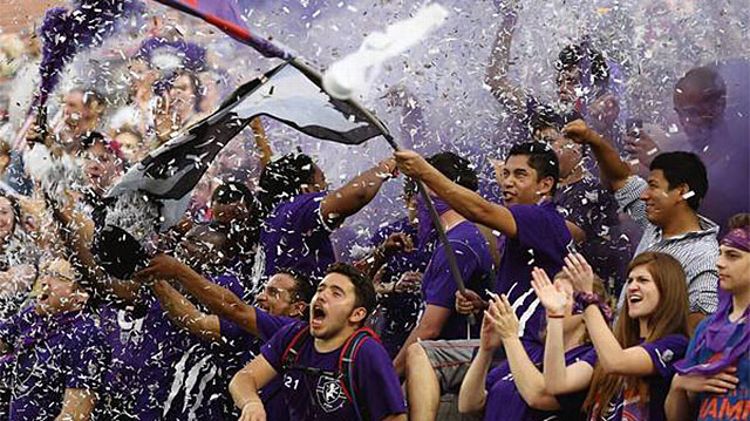 The Designated Player has all the sweet hook-ups. So this week, when Twitter began rumbling that Orlando City were about to be confirmed as the 21st MLS club, entering the league in 2015, there was only one man he wanted to speak to.

The DP swiftly called up Ray Hudson (“Hi DeeeeePeee”), former coach of the defunct Miami Fusion, professional Geordie, and current much-loved idiosyncratic commentator for beIN Sports, to get his take on the revival of Florida’s soccer fortunes. Apologies for the spelling. Blame the useless Siri app on the DP’s phone. Also, some of the metaphors jump around a bit, but that’s Ray, not the technology. As Ray himself put it, “Leaping like a salmon, my logic is like Riohhhh Ferdinand on the morning of a drug test. Like Neetsheee telling us God is dead, sipping tea on the pastor’s patio.”

First of all, Ray, can you describe the scene down in Orlando as the announcement was made?

MAJESTIC! A mélange … a cabaaaaal of the grayut and gooood of Floruda life in all thurrr pomp! Clad in porple — the color of emperors, a pigment made from the crusssshed shells of the muuuurex snails, inching their way across the sand headed for the promised land, their destiny unfolding into a bigger picture — a picture painted by Picassohhh on a big European night. Prince and the Revolution looking down in arseless chaps. And Adrian “Inchy” Heath giving it laaaaarge at the thought of the biggest stage of all — a Wednesday-nighter against the Revs.

A lot of people seemed to be up on the stage celebrating the official announcement with commissioner Don Garber last night. Was that all just stagey enthusiasm, or is this really a huge moment for the people of Orlando?

GOOOOOFY! CAN YOU SEE ME NOW, GOOOOOFY?! My wuuuuuurd! Spectackalar news for the hurrrrrl Disney community. They’ve been shouting for months that it’s a smurll world after all, and now they’re vinduhcayted. Commissioner Don Garber, like a Nosfurahtoo but for good, emerging out of the shadows to say, “Let there be light.” Twenty-one today. They’ve got the key of the door. There’s never been 21 before. There’s been 10, and for a bit there was eight. Payyyynful times. All fixed now. Thousands on the stayyyyyge, thanking each other, high-fivin’, like God giving man the finger in a Mickalangeloh. Citeeee counslahs, stayyyyt legislayters, some blurks who wandered in with porple flags. No Mickey in sight, but there’s the guvnor of Floruda stuck in the middle getting booed like Captain Hook. Resplendent!

The management team in Orlando have insisted on entering the league in 2015, even though the most optimistic scenarios for a stadium being built won’t involve breaking ground until spring of 2014, with an earliest completion time of midseason 2015. So the team would likely debut at the refurbished Citrus Bowl. Might that lose them some momentum?

Now the reeyul work begins, like a phoar-phoar-too of medeeeeeval craftsman contemplating the building of a magic kingdom. The bannuhs have been rayyyyyzed, the drums have been beaten. The Citrus Burrrl will incubate the baby like a coddled egg, with just a twist of lemon. Zesty but not tart, then when ready served up in a compact downtown stadium setting like a MasterChef’s dish gracing the sheeeekest of all fashionable bistros. Opening night. Laydeeez drink free. Flavored with Brazilian flair, English pragmatism, and near to all transport hubs.

You’re relentlessly enthusiastic, Ray, even though the idea of soccer in Florida must hold some difficult memories for you. You were the coach of the Miami Fusion side that folded after winning the 2001 Supporters Shield (some of your heartbroken fans even held the Shield hostage for a while in protest). Do you think Florida is ready this time to support MLS?

FLURIDYAN LAZARUS! Written off … condemned to hurricanes and election fraud … and now bouncing back. Floruda is back in Orlandoh — porple paradise of the peninsula, popping up like the happiest whack-a-mole you ever saw. It’s ready, it’s aybull, it’s porple.

Is any of your enthusiasm due to the fact that a franchise in Orlando might further open the door for a possible David Beckham franchise in Miami?

To parahphrase the grayyyt Sid Waddell: Dayvid Beckum — he’s not Adonis, he’s THE Donis. Striding through South Beach. In his underpants. Clean cut. A man who can corrrrl a foooootball through the eye of a camel. Eyes set on Miami. Jacket open like Don Johnson in his pomp. The Little Englander that could. It’s not Miami Vice. It’s Miami nice.

And of course the word is that he’s been talking with LeBron James about going in on the deal. I understand LeBron has actually been in touch with you, himself, to get a sense of the Miami scene. How did that go?

He’s a colossus. King Jayyyymes. Authorized version. The good boooook. And right here in Miami, he’s the bookmark AND the payuge turner. I said to him, “It’s a byoooootiful gayum Leb, and the only thing you need to know is that it only takes a second to score a gurrrrrrl.” He said, “Dude, I’m with the Heat. It takes less than a second to score a girl, if that’s your thing.” I said, “Aye, LeBron, but the games about gurrrrls. It’s about pashun, the back and forth of two entuhtees looking for an opening. Restless, like two wolves pacing under a moooon. But always gurrrrrls.” He said he had a brand to think about, called me back with a question about what a disallowed gurrrrl was, and like that he was gone, lumbering into the Miami night, before I could say good-bye — like a faithless Heat fan battering on the door of heaven, layyyyyt in the fourth quarter with Behellzeeebubba and his minions circling. Lovely lad.

Right. I think that’s about all — thanks, Ray.