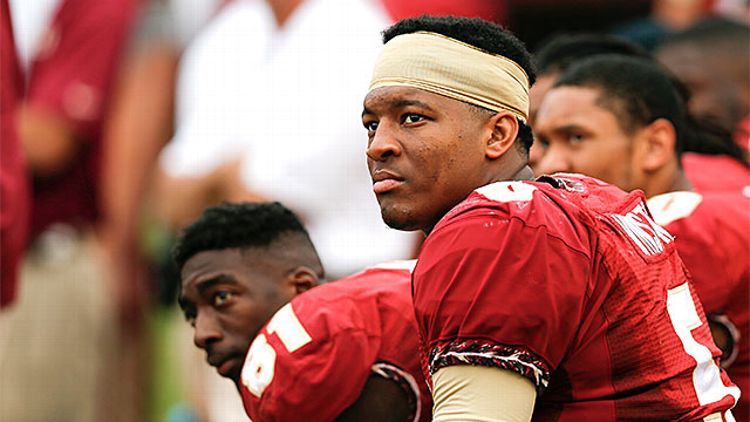 On Wednesday, new information regarding the sexual assault case against Florida State quarterback Jameis Winston came to light. Here’s what we know about the situation so far.

Who is Jameis Winston?

Winston is a 6-foot-4, 228-pound redshirt freshman quarterback from Bessemer, Alabama, who plays for the Florida State Seminoles. He was the no. 1 high school quarterback prospect in the class of 2012 and was drafted by the Texas Rangers in the 15th round of that year’s MLB amateur draft (he was a relief pitcher/outfielder for the FSU baseball team for the 2013 season). Additional accolades: USA Today 2011 All-USA First-Team All-American, Sports Illustrated Second-Team All-American, 2011 Alabama Gatorade State Player of the Year.

Why is Winston important in college football?

He has led the Seminoles to a so-far undefeated season (10-0, 8-0 ACC) with a likely chance of playing in the BCS National Championship. FSU is ranked no. 2 in the polls and is also in second place in the BCS standings (trailing Alabama, which is also undefeated). He boasts a 70.9 percent completion rate (185-for-261) and has amassed 2,938 receiving yards, 145 rushing yards, and 31 touchdowns (28 passing, three rushing). He’s 14th in passing yards among FBS quarterbacks and is a leading Heisman Trophy candidate.

What do we know about the sexual assault case tied to Winston?

December 7, 2012 — A Florida State student from the Tampa Bay area reported that a sexual assault had occurred at an off-campus apartment. Police investigated the incident, took witness testimony, and collected evidence, including assembling a sexual-assault kit. The case was assigned to the Tallahassee Police Department’s Special Victims Unit.

January 2013 — According to the Tampa Tribune, the woman’s Dade City attorney, Patricia Carroll, contacted Tallahassee police Detective Scott Angulo after the woman’s family “grew concerned that she would be targeted on campus.”

February 2013 — Tim Jansen, Winston’s attorney, said police approached him in February but said soon after that the case was no longer being investigated.

Tallahassee’s interim police chief, Tom Coe, said the accuser stopped cooperating with police at around the same time: “In February 2013, the case was classified as open but inactive, when the victim in the case broke off contact with TPD, and her attorney indicated she did not want to move forward at that time.”

November 12, 2013 — Tallahassee City Manager Anita Favors Thompson emailed city commissioners to provide an update regarding the case “against FSU football player Jameis Winston” by the woman, who said she was sexually assaulted while intoxicated at a local bar. The email stated that the Tallahassee Police Department began interviewing witnesses and compiling details but the investigation stalled when it stopped receiving responses from the woman. “Shortly thereafter a representative of the young woman’s family who is an attorney contacted TPD and said the young woman had changed her mind and did not wish to prosecute.”

November 12, 2013 — In a letter to Tallahassee Police Department’s Sgt. Joanna Baldwin, Carroll said she understood that the police department was planning to release information about the case in response to media requests. She cited Florida’s Rape Shield Law and requested that no information about her client or “her rape” be released to the press. She also requested a full copy of the police report and copies of medical and blood toxicology screening records.

November 12, 2013 — According to Coe, the Tallahassee Police Department turned over the incident report to State Attorney Willie Meggs’s office after Tampa Bay Times and TMZ reporters requested it.

November 13, 2013 — The police report was released to the Tallahassee Democrat in the afternoon and then to other media outlets the same day Meggs began reviewing the incident. The incident occurred on December 7, 2012, around 2 a.m., and was reported to Tallahassee police about two hours later. Though the suspect was listed at between 5-foot-9 and 5-foot-11 and Winston is 6-foot-4, the woman identified him as a suspect in early January.

Winston’s attorney said no charges were filed and Winston was never interviewed by the police. “We’ve been cooperating with them and we’ve supplied them with witness affidavits.”

November 13, 2013 — Meggs reviewed the case and determined that more police work had to be done before the case could be closed. TPD changed the case’s classification from open-inactive to open-active, which rendered future details of the investigation off-limits to the public.

Meggs’s decision was significant because if authorities charge Winston with a felony, he would be suspended immediately and rendered ineligible for competition by the Florida State athletic department.

November 20, 2013 — The woman’s family released a statement saying that after the initial report was taken, they wanted DNA and blood work done, but Angulo “specifically refused to collect Winston’s DNA or interview Winston’s roommate who witnessed the attack. Detective Angulo stated that such activity would alert Winston and the matter could go public.”

The statement also said that “Detective Angulo told the [woman’s] attorney that Tallahassee was a big football town and the victim needs to think long and hard before proceeding against him because she will be raked over the coals and her life will be made miserable.”

It concluded with a list of questions “in light of the fact that this matter has now been made public”:

• “If Winston’s attorney was aware of the case in February (2012), why didn’t Detective Angulo collect DNA evidence, interview Winston and conduct a proper investigation?”

• “Why did it take Detective Angulo four months to verbally inform the family of the blood work results?”

• “Why was Winston not listed as the suspect in the police report once he was identified in early January?”

• “Why didn’t Detective Angulo or his superiors inform the State Attorney of the crime before the media sought a copy of the police report 11 months after the crime?”

November 20, 2013 — ESPN.com reported that DNA analysis by the Florida Department of Law Enforcement on Tuesday shows a match between a sample provided by Winston and DNA taken from the accuser’s underwear. The crime lab determined that the chance of the match being somebody other than Winston was “one in 2.2 trillion.”

November 21, 2013 — In response to the ESPN.com report, Jansen, Winston’s attorney, held a press conference in the morning. He said he had not seen results from the analysis and expressed concern about information being leaked to the media from the police department. Jansen confirmed that Winston had submitted a DNA swab last Thursday and said he was not surprised at the results from the ESPN.com report, answering “absolutely” when asked if sex between the woman and Winston had been consensual.