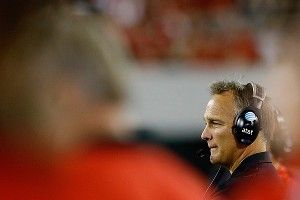 The NFL embodies the sort of idealized America that only exists when presidential candidates start to get a little teary-eyed about the promise of our forefathers. Every team starts with basically an equal chance of fulfilling the American Dream (read: annual trip to Disneyland), and if they fail to do so on a yearly basis, you can and should blame the victim. Work hard, be careful with your dollars, and allow for a sprinkling of top-down benevolence, and you’re on the road to success. With each season, there’s enough hope for the populace to vote with their wallets.

But in a way, college football has become far more actually American in terms of how economic hierarchies and criminal allowance determine the landscape — the most common phrase uttered during the recruiting process is the “rich get richer,” as resource-rich schools siphon the top talent from the needy like Mr. Burns’s slant-drilling operation. Real upward mobility takes generations, whereas the new-money teams are bankrolled by billionaires who are at least somewhat supervillain-y.

Meanwhile, the middle class, as represented by conferences named like planned communities (Conference USA, Sun Belt) erodes, as corporate downsizing squeezes out their need for existence and the poor subject themselves to utter humiliation to make ends meet.

It makes for fascinating case studies in that all-too-American affliction of depression. Which, in between heroic slugs of Wild Turkey, your great-grandfather may have told you was something they had no time for back in the actual Depression. But oh, the many colors of the Feel Bad Rainbow. There’s the depression of the wealthy and unfulfilled, the existential dread of the aspirant middle class, the desperate failures of those trying to get a foothold in shaky times, and the sort of circumstances that lead a school to say screw it and hire Mike Locksley.

So whom are we talking off the ledge? Every so often, we will survey the Joy Division, a brooding accumulation of the most dejected, despondent, quietly raging, and hopelessly drunk BCS teams and a non-BCS team for good measure, and offer insight into their particular mental state with a comparative artistic Threat Level — because we seek to educate as much as demoralize. This is the way, step inside.

Threat Level: Gucci Mane
There’s a specific kind of sociopathology in the depressive, in which they simply feel they don’t deserve success or wouldn’t be able to handle it — and as such, they fuck up at the absolute worst time as a means of acting out their own self-fulfilling prophecy. Few embody that more than Gucci Mane, once poised to become Atlanta’s next commercial sensation at a point when T.I.’s and Young Jeezy’s careers had cooled. Then he wound up in jail, did a song with Usher, and tattooed a lightning cone on his face at the very moment he could do something that might legitimately advance his career.

Likewise, winning a cratered Big East might give a program the opportunity of generating nationwide disdain and getting blown out by the loser of the Big 12 Championship, but last I checked, that BCS check spends just the same as LSU’s. With its enviable recruiting base and penchant for late-season turnarounds, South Florida’s been everyone’s new-money pick for quite some time. And yet, every year, they find a way to lose to a Big East space filler and now Ball State — in a game where they rung up 518 total yards and a positively Raiders-esque 112 penalty yards. That said, in 2012 Gucci’s released his best mixtapes in years — guarantee the Bulls run off a six-game winning streak that starts the cycle anew.

Threat Level: Greg Oden
Two annoying habits of college football announcers: judging which team has the advantage in “intangibles” and calling an unlucky athlete “injury-prone.” The former seeks to quantify the utterly unquantifiable; the latter is more or less trying to find a scientific basis in voodoo. And yet, the Iowa Hawkeyes make both feel legit. Much like every year brings the promise of some crippling and confounding setback in Greg Oden’s recovery, another batch of Iowa Hawkeye halfbacks find their ligaments have the stability of udon noodles. But as with Oden, there’s that glimmer of hope — a dominant three-game run or a guy named Mark Weisman running for 217 yards in real life, not NCAA Football 13. They somehow still lose to Central Michigan, which at this point is almost certainly the directional school in Michigan with the third-most swagger. Even worse is that Iowa can still legitimately win the Big Ten and hear about this for the rest of the year.

“I’m just sayin’ you could do better / tell me have you heard that lately?” Yeah, I think they have. Don’t get me wrong, Virginia’s last 12 quarters of football have followed a classic drunk-dial arc, which is to say, utterly erratic and almost always wince-inducing — sometimes you get a willing party like Sam Ficken, who gives you the false sense that you’re on the right track. The Georgia Tech debacle was the part where you don’t even realize how far you’ve gone, and last week’s almost apologetic performance against TCU was the semblance of ill-fated damage control. This is about what most people expected, but as you hear the Hoo faithful drumming up what they think is requisite outrage during a season where mere bowl qualification was a reasonable goal, there’s something perfunctory and preemptive about it all.

It’s luxuriating in the balm of depression, knowing full well it’s a passing phase. Because as with Drake, you get the feeling Virginia fans are squeezing every last bit of angst out of this season, knowing that in the near future, they’ll wake with every conceivable advantage imaginable and the realization that in 2012, most of their best players are two years removed from ignoring a home ec teacher. Virginia knows they’ll be fine; maybe they just need Birdman to give them a pep talk.

PB&J are best known for “Young Folks,” the Big Bang of the whistle-core sub-genre that has brought us Foster the People and Electric Guest, so thanks for that. But among their many overlooked and quality deep cuts is “Amsterdam,” a deceptively chipper song about how a romantic getaway can only emphasize the pervasive mundanity of your real life. See, why would ULM be in here otherwise? After all, the Warhawks are arguably the toast of college football after giving legit BCS teams like Auburn and Baylor all they can handle. And even if their win against Arkansas is looking more and more like an Independence Bowl victory played out three months in advance, it got Kolton Browning the Top Plays face time he so deserves. But now Todd Berry’s team is simply putting up Polaroids in the cubicle, to be longingly stared at as they try to find the same joie de vivre required to beat Middle Tennessee State, with no one watching except the New Orleans Bowl committee.

Threat Level: Mike Newhouse, Dazed and Confused
You might think Arkansas should have tenure in this slot until further notice, but we’re just going to sit tight because what’s going on in Fayetteville is more manic than depressive. But Vanderbilt? As with Mike Newhouse, they’re overly cerebral, more than a little neurotic, and desperate to establish some kind of alpha dominance in the keg-party atmosphere of the SEC. You can’t blame Vandy for choosing Georgia to pick on — there is something downright Flanders-esque about Mark Richt, right down to his kinda smokin’ wife. But as with Flanders, there is a repressed atomic rage that looses itself at bizarre times. Lest we forget, Richt was willing to take a 15-yard penalty in a rivalry game where his job was at stake, simply because he knew the value of a next-level trolling. So when we think about James Franklin clapping at UGA defensive coordinator Todd Grantham after last year’s uncomfortably close game, Mike’s logic for throwing a punch at Neanderthal Clint arises: “All I have to do is get in one good punch, play defense and wait.” Vanderbilt forgot the part about defense and Mark Richt lost control again, pounding the Commodores back to the pre-Cutler days, 48-3.

Threat Level: Gilbert and Lewis, Revenge of the Nerds
Despite its veneer of being a lighthearted college romp, Revenge of the Nerds bears more in common with Odd Future than Animal House — date rape, virulent homophobia, anti-Asian slurs, homemade pornography, cross-dressing, an utter ignorance of the passage of time, and irresponsible drug use are just some of the things it condones in the interest of smiting one’s enemies. But perhaps the hardest thing to take about that movie is the dark streak of self-loathing and self-reckoning that’s at odds with its capering. This is best embodied by Gilbert trying his hardest to remind Lewis of how a nerd’s station in life is to simply take shit in stride after the Alpha Betas either trashed their house or released pigs into their party or whatever they did when they weren’t being mentally abused by John Goodman.

This really could’ve gone either way between Colorado and Washington State, but with the Buffaloes, you can start to see that glimmer of fleeting hope that makes the future all the more sad. After embarrassing losses to states Fresno and Sacramento, a comeback against the Cougars in Mike Leach’s defense-optional, experimental first year is the sort of win that might signal a turnaround to the higher-ups, at least until De’Anthony Thomas goes Alpha Beta on CU’s defense.

Threat Level: Gary Cherone in Van Halen
This Misery Index requires you to do what so many Kansas football fans have done already: Forget that Turner Gill ever set foot in Lawrence. But really, what was the logic behind the hire of Charlie Weis? He reminded you of the last dude in some physical aspects? It was at least good for a headline, and that’s all that really matters when the system is so damaged from the inside? You know it’s not going to work. He knows it’s not going to work. And the sad part, after losing to the likes of Rice and Northern Illinois and facing ranked teams in five out of their eight remaining games, is that you get the uneasy feeling that they’d take back the dude who burned every last bridge out of town if he offered.