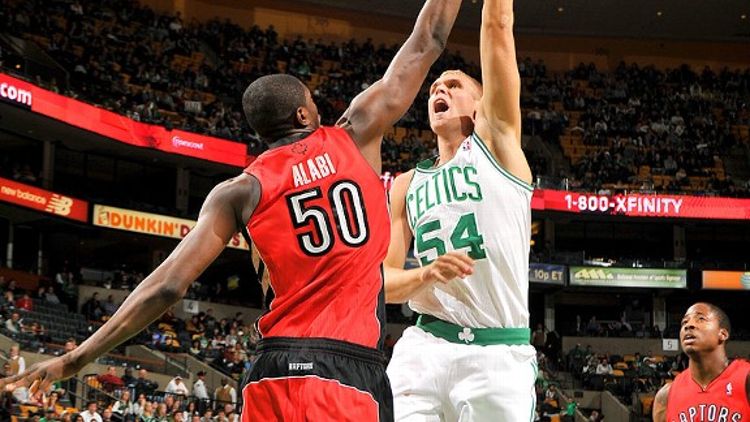 Behold: The Rise of the Legend of the Cult of Greg Stiemsma! The 26-year-old rookie center has played five games for the Celtics, accumulating career totals of 22 points, 22 rebounds, and 13 blocks — and, in the process, winning the hearts and minds of every man, woman, and child in the greater Boston area. Tell ’em, Paul Pierce: “The Steamroller, that’s my man. He got himself to the league, and now I’m going to keep him here. He’s going to have a 10-year career. Just rebound, set picks and block shots — and get paid.” Anything else? “He’s the Steamroller. You bring it into the lane, and he’s going to steamroll you.”

And how can you not love The Steamroller?! (And/or The Steamer: Paul apparently was not aware Greg already had a nickname. Also: It’s pronounced STEAMS-MUH). The kid played four years at the University of Wisconsin, then bounced around between Turkey, Korea, and Sioux Falls before playing his way onto the Celtics roster as a training camp invite. His legend budded during a preseason game against the Raptors, when a sickening display of offensive moves immediately led some top pundits (namely, my brother) to dub Stiemsma “the second coming of Dino Radja.” Coach Doc Rivers gushed (“Oh gosh, he’s great”) and Greg stayed humble (“I just hope I showed I belong … whether it’s three- or four-minute stretches practice or wherever”) and a fanbase swooned.

“Rivers watched Stiemsma pass up a couple of open looks in practice during training camp and decided he needed a little self-affirmation. So Rivers blew his whistle and told the 6-foot-11 Stiemsma to go stand in front of his teammates and repeat the phrase, ‘My name is Greg Stiemsma and I’m a shooter.’ ‘We kept making him repeat it,’ Rivers recalled. ‘Everybody was laughing. He said, ‘I can shoot. I’m a shooter.’ And he is.'”

Monday night against the Raptors, the Story of Stiemsma blew up. Greg stepped into the starting five for an injured Jermaine O’Neal — and gracefully dropped 13 points, 7 rebounds, 2 blocks. Afterward, Kevin Garnett broke down the fast-developing Stiemsma lore: “He has uncanny instincts, can block shots like … no one I’ve ever seen. He doesn’t look all that fast and quick and explosive, and I think that’s kind of his mystique about him.” Stiemsma Mystique! Absolutely right, KG. I can’t be the only one currently co-opting “My name is Greg Stiemsma and I’m a shooter” as a personal mantra.

The underdog story is heartwarming enough, but that’s not the only reason Stiemsma’s been embraced. The sight of Jermaine O’Neal (and his weird, too-long shorts) flailing around pretending to be a starting NBA center would be disheartening enough even if it didn’t immediately make you click back to the Kendrick Perkins trade. Clearly, the Celtics really, really need a center — and they really, really used to have one. It gets worse: Jeff Green, the guy Perk was traded for, is out for the season with a serious heart condition. (He undergoes surgery January 9th. The best of luck to you, buddy). Meanwhile, the Celtics are in near-limbo. Yeah, technically they’re title contenders, but even the die-hardiest of die-hards can see there’s some heavy hitters ahead of the Celts in line for that championship belt. And what comes next? A few seasons of the Big Three getting older — maybe retiring, maybe being traded away — a few second-round playoff exits, and then Rajon Rondo being left all alone. If you let yourself get carried away like this, it gets pretty depressing.

But, then, there’s The Steamroller/Steamer — a shining beacon of hope and inspiration in the darkest of corners. Dig further, beyond the shot blocking and the aw-shucks demeanor, and there’s only more to love. Like the fact that, at Wisconsin, he suffered depression so badly it almost ended his career, but was confident enough to discuss it publicly. From a Sports Illustrated report at the time: “Stiemsma says he has no intention of being any kind of spokesman for depression, but he will also not shy away from talking about his case if he is asked. ‘It’s definitely a humbling experience,’ he says. ‘I’m not as invincible as I’d like to think I am sometimes. I guess I’m older and wiser now. There have been people who have gone through similar things and haven’t made it. I’m going to be one of the guys that does make it.” Damn right you are!

And in Boston, everyone continues to freak out. Dan Shaughnessy’s Thursday Boston Globe column is all about how insanely-excitable color commentator Tommy Heinsohn compared Stiemsma to Bill Russell during a game. The takeaway: no, Greg Stiemsma is not as good as Bill Russell (Cedric Maxwell: “Let me state the obvious. He’s white”) … but he’s still pretty rad.

One last reason to like the dude: I’ve looked extensively through his Google Image cache, and I’m almost sure that is not a soul patch under Greg’s lip. It just looks that way sometimes because of how his chin is shaped.