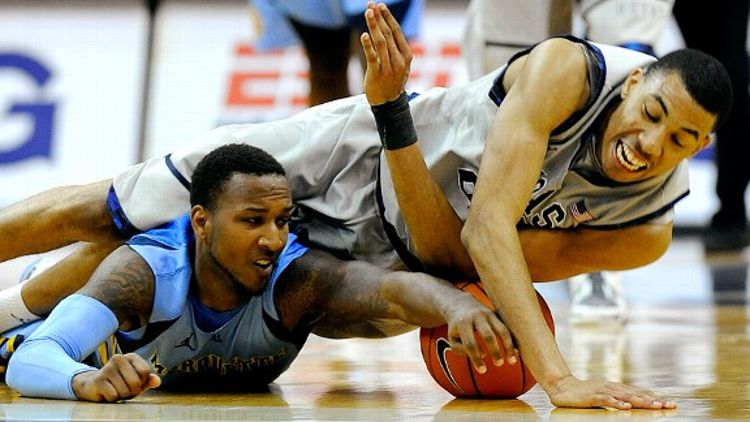 When Marquette’s Todd Mayo hit a 3-pointer with 13 minutes left at the Verizon Center on Wednesday night, his team took a 17-point lead on no. 9 Georgetown. It had been a dominant 27-minute display from the no. 20 Golden Eagles, all the more impressive because it came on the road. The home team looked, at least for the night, outclassed.

But Georgetown wasn’t about to panic. The team’s body language was calm and unbowed, always ready for a brief reprieve in which to launch the counterassault. Given a chance, the Hoyas would make a push. Which didn’t mean they were going to win; Marquette was the better team, no question. But they weren’t going to concede, and they definitely wouldn’t play afraid. They had, after all, seen far worse.

You can’t talk about the Hoyas season without talking about China. In mid-August, John Thompson III’s team left for a four-game, 10-day “Goodwill Tour” of Shanghai and Beijing. On August 18, Georgetown met the Bayi Rockets. It was a typical game on Chinese soil, which meant the officiating was comically one-sided, and it kept the Rockets in the game. Midway through the second half, Bayi had attempted 57 free throws to Georgetown’s 15.

What was less typical for an international friendly was the high tension. As the Washington Post reported, the game paused once when a Bayi player began screaming at Thompson on the sideline, and a second delay came about when another Chinese player received a technical for arguing a call. Bad blood was boiling, but try finding a high-level game without that element. For the most part, anger translates into nothing more dangerous than competitive intensity.

What Georgetown’s players might not have realized was that the Bayi Rockets — the Chinese army team — had a reputation for fighting. They were also a once-legendary national symbol rapidly losing prestige in the country. With less than 10 minutes left in the second half, the teams were tied at 64. A Chinese player committed a hard foul on Georgetown senior Jason Clark, and the two exchanged words. Words turned to shoves, and both benches emptied. Suddenly, the brawl was on.

Video of the fight is available at the Post link, and there’s no getting around the result. The Chinese team outmatched the Hoyas. Chairs were thrown, fans and team employees joined in, and the police stood idly on the sideline. Georgetown freshman Aaron Bowen was kicked and chased over the baseline by three Chinese players, and one threw him on the ground and punched him repeatedly. Injured forward Moses Ayegba, another freshman, was reportedly hit with a chair. The rest of the Hoyas did their best to prevent further damage, but they were constantly on the defensive.

After a minute of fighting, Thompson pulled his team off the floor. When the Chinese fans realized the Hoyas were leaving, they threw water bottles, some of which hit American fans in the Georgetown section.

Trailing by 17, with Marquette’s confidence at a peak, Jason Clark responded with a 3-pointer. He’s the team’s leading scorer, a senior averaging almost 16 points per game, and a big reason why the Hoyas have surprised the country by compiling a 13-1 record and surging into the top 10. In the preseason rankings, they weren’t even in the Top 25. In fact, they didn’t even appear among the next 23 that received votes. Essentially, they weren’t in the top 50.

So what changed? Was it resilience gained in the Chinese crucible? If so, you wouldn’t really have expected it. The Hoyas’ record under Thompson, especially the past four years, hasn’t been very inspiring. Last season, they lost their last five games and looked lifeless in an 18-point loss to Virginia Commonwealth in the NCAA tournament. The year before, Ohio drubbed them by 14 early in the tournament. In 2008-09, they lost 12 of their last 15 and exited to Baylor in the NIT’s first round. A year earlier, a strong season ended with a second-round loss to Stephen Curry’s Davidson team. The Final Four appearance from 2006-07 seemed far removed at the start of this campaign, and the top 10 was a pipe dream.

Although many expected the team to cancel the remainder of the Goodwill trip, Georgetown kept on. Thompson, Clark, and junior forward Hollis Thompson even met with the Bayi coach and two players the following day to shake hands, exchange gifts, and smile for the cameras. The team flew to Shanghai, and the remaining games passed without incident.

The question is, how did it change the team?

The season started as expected, with a couple of easy wins followed by a loss in Maui to no. 14 Kansas. But the loss was closer than expected, just four points, and only some late heroics by the Jayhawks’ Travis Releford, along with the Hoyas’ inability to deal with Thomas Robinson, let Kansas escape with a win. But the Hoya offense, derived from the Princeton system, where Thompson coached for four years before returning to his father’s stomping grounds in 2004, proved it could compete with the nation’s elite.

As it turned out, that would be the last game the Hoyas lost in 2011. Two days later, in an exciting, fast-paced game with a bevy of huge shots, Georgetown topped no. 8 Memphis 91-88 in overtime. Clark hit a crucial 3-pointer with less than a minute remaining in overtime, and Henry Sims, the 6-foot-10 senior, scored 24 points to go along with eight rebounds. Most of Sims’ buckets came at the end of regulation and overtime, and it was the first of what was to become many examples of Georgetown’s excellent play under pressure.

On December 1, the Hoyas visited no. 12 Alabama. After a predictably grinding game, the visitors were down by one, 55-54, with 12 seconds left. Thompson drew up a play for Clark to penetrate, with Hollis Thompson as a secondary outlet on the wing if nothing opened up. The Alabama crowd was in full throat as Clark took the ball upcourt.

Georgetown, ignored at the start of the year, was about to sniff the Top 25.

The clock ticked away, and Marquette clung to its lead. Clark scored four quick points, and then Sims took a turn, scoring five of his own. Marquette tried to keep pace, but the momentum was starting to weigh on the Golden Eagles. The Verizon Center grew loud as the four-minute mark passed. The home team was down just five points, 66-61. In seven minutes of game time, Marquette had scored just four points.

After another Golden Eagle miss, Clark grabbed the board and headed up floor. Greg Whittington, another member of the talented Hoya freshman class, found Hollis Thompson beyond the arc. As he did it against Alabama, Thompson buried the shot. Darius Johnson-Odom, who had played passably well for the first 30 minutes, turned it over. Thompson came back and hit another jumper, and with 2:37 to play, the 17-point lead had been erased. Marquette and Georgetown were tied at 66.

After three easy wins, Georgetown met Memphis again. This time, the Tigers were unranked. The Hoyas won by 11, with Clark and Thompson combining for 35 points. Heading into Big East play, the team nobody rated was 10-1.

But the first conference game was a doozy, on the road at no. 4 Louisville. Georgetown was ready for a fight, and after trailing by three at the half, the Hoyas made their run in the second. Markel Starks, a sophomore who shoots 47 percent from beyond the arc, hit four 3s in the second half, and the last two turned a grinding, tight game into a potential runaway. When Starks’ fourth 3 went down with 6:18 left, Georgetown found itself holding a 10-point lead.

But this was Louisville, basketball country, and it never felt like the Cardinals would go down without a run. Over the next four minutes, they clawed back, finally tying the game at 63 with two minutes left. The noise from the crowd dwarfed anything Georgetown had heard in Alabama, and it seemed that their toughness had found its ceiling, that the difficulty of playing in a tense environment away from home had finally seeped through the cracks of their resolve. Dick Vitale couldn’t stop praising the fans, even going so far as to give them credit for the comeback. The next possession was everything.

This time, it was Otto Porter, the freshman, off the Sims miss. He went on to make four straight free throws to seal the upset for Georgetown, and get the Big East campaign off to a fast start.

If you’re keeping track of the Georgetown heroes, the list to date has included Clark, Thompson, Sims, Starks, and Porter — in other words, the five Hoyas who play the most. They’ve all stepped up at some point in the tense situations this season, senior and freshman alike, protecting each other and the team as they emerge with a win time after time.

The lead gone, Marquette had no chance. Georgetown had been in this exact spot too often. They knew too much. Even the freshman had the “inexperienced” label ripped from them prematurely. With the home crowd at their back, the Hoyas took control. Sims made a layup. Clark made a layup. The visitors gamely tied it twice, but then Thompson hit yet another big 3 to give his team the final margin. When a desperation shot by Jae Crowder went long, Georgetown had upped its Big East record to 3-0, and its overall record to 13-1.

The Hoyas are far from the most talented team in the country, as the close games show. They’ll lose again, even in a Big East conference that’s experiencing a down year by its own high standards. But a surprise fight on foreign soil seems to have prepared them better than anyone could have expected for the rigors of the season, and what once felt like the most extreme pressure now feels like something just a little bit less.

We’ll probably never know what happened in the hours and days after the brawl, but the effect is obvious. In unity and toughness, the Hoyas are a step above their peers. They once found themselves unable to take care of each other, unable to function as a team in the face of an attack. Whatever else happens, that’s not a mistake they’re likely to repeat.