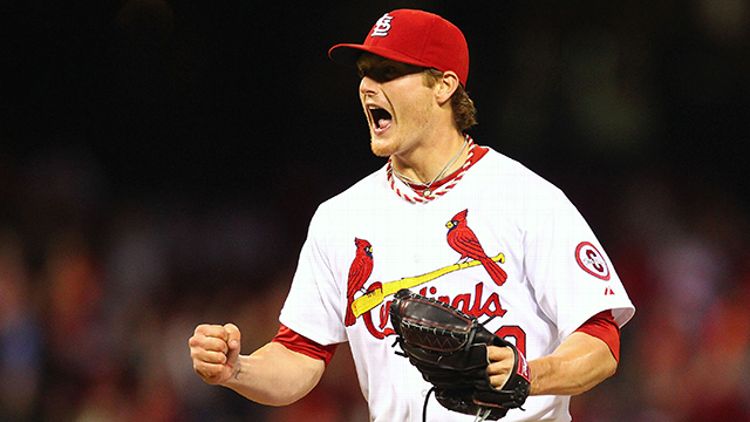 Shelby Miller might go his entire baseball life without matching what he did Friday night. Facing the Rockies in St. Louis, the 22-year-old right-hander gave up a leadoff single to Eric Young Jr. … and nothing else, mowing down 27 straight hitters en route to a one-hit shutout. He struck out 13 batters and walked none, hurling not only the best game of his young career and the best game in Cardinals history, but also one of the most dominant starts of all time, for anyone.

Miller’s near-perfect game might’ve been the overwhelming choice for best pitching highlight of the Cardinals’ season and a lasting memory for the rest of the year … until Adam Wainwright came along and nearly topped it. The very next night. In Game 2 of the Rockies series, Wainwright fired 7⅓ no-hit innings before Nolan Arenado broke up the no-no bid on a clean single to center. Wainwright would close out the game with a two-hit shutout, striking out seven batters and walking just one. The two Cardinals starters combined to retire 49 straight Rockies hitters, basically one and a half perfect games.

That stretch of pitching might seem borderline impossible to pull off. Given recent events, maybe we shouldn’t have been too surprised. Miller’s start was one of four one–base runner shutouts last week, as many as we saw in five years (2003 through 2007) last decade and not even including Wainwright’s three–base runner gem. Miller had already been pitching exceptionally well, going into Friday’s start with a 1.79 ERA in 50⅓ major league innings, with 54 strikeouts and just 15 walks over his brief cup of coffee last season and his first six starts this year. Wainwright’s seven-strikeout, one-walk night actually hurt his strikeout-to-walk rate, which sat at an unfathomable 48-to-3 before that Rockies game. None of this was all that new for the Cardinals rotation either, not for a starting five that leads the majors with a 2.29 ERA, 2.81 FIP (second-lowest in MLB), 3.29 xFIP (also second-lowest), and just 12 home runs allowed. The Cardinals own the best record in baseball as we near the season’s quarter-pole, and their rotation is the biggest reason they’re here.

Even on a staff that good, Wainwright and Miller stand out as the staff’s co-aces, and two of the best starters in the league this year.

Miller’s one–base runner shutout was the first by any Cardinals pitcher in the modern era. He became just the fifth starter ever to allow the leadoff batter to reach base, then retire the next 27 in order. He got eight strikeouts looking, tied for most in a major league game going back two seasons. His 30 called strikes were one shy of the record for most called strikes in a game by a starting pitcher this season. His 98 Game Score was the best put up by any pitcher this season, tied for the best score in history for any Cardinals pitcher.

A three-pitch pitcher last year (fastball, curve, changeup), Miller has thrown very few changeups in 2013, essentially making him a two-pitch pitcher. With the exception of a few Randy Johnson types, very few pitchers of recent vintage have thrown just two pitches on a regular basis and seen sustained success. Acknowledging the small sample size issue, though, Miller’s fastball has been the

In an interview with Grantland last summer, Wainwright talked about commanding his own curve as being the final step on his road to recovery from Tommy John surgery. On Saturday, he showed off that command, throwing 35 of 41 curveballs for strikes. His velocity’s come back, too, as Wainwright’s fastball averaged 92.7 mph vs. the Rockies, his highest average fastball velocity in a game since an August 2010 start against the Reds. At start’s end, Wainwright had bagged his sixth shutout since 2010, tying for second behind Cliff Lee with seven (this despite Wainwright missing the entire 2011 season because of injury).

Most teams would kill to have an ace like Wainwright and another potential front-line starter like Miller. But what makes the St. Louis rotation truly elite (you can probably rank the Cardinals, Nats, and Tigers as the three best starting fives) is that it’s so deep. Lance Lynn struggled at times to find the strike zone Monday night. But his seven-inning, seven-strikeout, five-walk performance left Lynn with a 2.88 ERA, 3.13 FIP, and more than a strikeout per inning through eight starts. Jaime Garcia’s strikeout rate is down a bit, but he still owns a 2.88 ERA and 3.37 FIP in his own set of eight starts, leading the majors with a 65.4 percent ground ball rate. Jake Westbrook has been the worst of the five on a defense- and luck-neutral basis, posting a 1.62 ERA thanks largely to Westbrook giving up exactly zero homers in 39 innings, despite striking out just 19 batters and ceding 18 walks. But even if Westbrook won’t keep a home run–to–fly ball rate of 0.0 percent going for long, his 61.3 percent worm-burning rate trails only Garcia.

Those results belie some significant rotation uncertainty coming into the year. Lynn suffered through a second-half fade last season, his ERA rising nearly a full run after the All-Star break. Garcia saw four different specialists until he found the opinion he liked, thereby dodging offseason shoulder surgery. Westbrook was unlikely to put up big numbers this year, but he remains a functional, roughly league-average starter at SP5. We didn’t know what to make of Miller’s 13⅔ career innings pitched in the big leagues, but we’re now starting to see why Baseball America named him a top-13 prospect three years in a row. Wainwright came with the fewest question marks, but it wasn’t a given he’d reemerge as one of the 10 best pitchers in the game just one year removed from missing an entire season.

The Cardinals might end up having a few holes to fix as the season goes on. The bullpen isn’t quite the horror show it was earlier in the season, but it wouldn’t be a surprise to see a deal or two to augment the relief corps, albeit probably something smaller than the Colby Rasmus megadeal in the summer of 2011. We could see a need at second or third base if management isn’t happy with Matt Carpenter’s defense at the deuce or David Freese continues to struggle with injuries and a flaccid bat, but top infield prospect Kolten Wong lies in wait in either case, with Carpenter moving to third if Wong gets called up. Matt Adams offers a big bat as a major depth piece at the corners.

But as long as their health holds up, starting pitching looks like an area that will require minimal help, making the small doses of idle speculation over names like David Price seem quaint and unnecessary. Maybe you move 21-year-old rookie Carlos Martinez back to the rotation if something goes wrong with one of the incumbents. For now, the Cardinals’ quintet is the envy of nearly any other team.

Sifting Through What's Left of the NFL's Free-Agent Heap