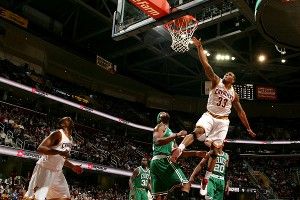 My favorite moment of this NBA season came last Thursday, with the Boston Celtics on the road against the Orlando Magic. Boston had already beaten Orlando (at home) that week, which was surprising enough even without the 31-point margin of victory. On Thursday, it looked like Orlando was all set to smack up Boston right back; at one point, the Magic held a 27-point lead. I was cool with it. I couldn’t possibly expect two wins against the big, bad Magic in one week, right? Especially with Rajon Rondo still sidelined with a wrist injury? And then, somehow, the wily underdogs scrapped back. Paul Pierce went off, the defense locked up, the breaks started coming. With just about eight minutes to go, the game was tied.

Marquis Daniels has the ball. He backs his man up, then swings it cross-court to E’Twaun Moore — a rookie who is only in the game because of Rondo’s injury — and he calmly drills a 3. Boston never trailed again.

With the win, Boston is now 10-10. Objectively, that’s pretty crappy. And, objectively, this season has been a mess. Losing out on David West in the offseason, sitting through Paul Pierce trade rumors, the general “Will Danny Ainge blow up the Big 3?” chatter, lingering injuries to Rondo and Ray Allen, the fact that Jermaine O’Neal continues to wear his shorts all extra-long and weird — it’s all a drag. The biggest thing, though, is that the balky early record the Celtics compiled meant the “window is closing” mentality of last year has now more or less moved to the “window has closed.”

But, oddly enough, that’s exactly what’s making this season rad — the joys of lowered expectations. Does this team have a realistic shot at a title? No. Not really. So let’s just enjoy them while we can, yeah? Last year, I would have shrugged off a come-from-behind-win against Orlando. (Indignant yells of “How are we going to beat Chicago/Miami if we can barely get past Orlando!”, etc.) Now, it’s a goddamn minor miracle. E’Twaun Moore is playing crunch time minutes? Great! I fucking love E’Twaun Moore!

Tuesday’s win should have been maddening. The Celtics were rolling along, up 16 going into the fourth quarter. Then Irving got going. He had 13 points in fourth, none better than a crafty slice-to-jump-stop maneuver with about a minute to go that cut the gap down to two. Two collapses against the Cavs in one week? I should have been fuming. Ray Allen was. “I hate it,” Allen said. “We won, but I take it as a loss in terms of getting better. Being able to play for a full four quarters is what I want. Every day we have to get better.”

But then Doc Rivers called Kevin Garnett’s number. Did I think Garnett was going to score? No. No, I did not think Garnett was going to score. But he backed up Anderson Varejao, laid down a couple of bumps, spun to his right, and let off a soft jumper that twirled and skipped — and it fell in. KG! Rusty knees and increasing mania and everything, and the dude still nails clutch shots every once in a while. I straight-up wanted to tussle his non-existent hair, and pat him on the back, and wink at him and be all like, “Good job, big fella.”

Look, I know what Allen’s on about. He’s thinking “We should be crushing Cleveland if want a shot at Chicago/Miami.” And I just want to say, “Bro. Relax. Let’s not worry about that right now. Let’s enjoy the little things.”