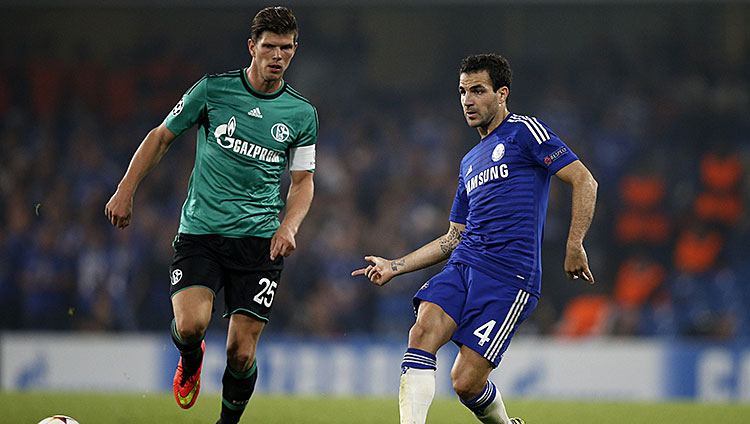 The first matchday of the Champions League is in the books, and, pleasantly, there were some surprises. Let’s have a look at the biggest.

Schalke 04 have looked like they were in total disarray in domestic play. They crashed out of the DFB-Pokal Cup at the hands of third-division Dynamo Dresden. They have managed only one point in their first three Bundesliga matches (though it should be noted that point came from a draw against Bayern). Rumors of a managerial ouster have already started bubbling up.

Meanwhile, Chelsea have looked like the strongest team in the Premier League, going 4-0-0. Last year, a weaker Chelsea squad played Schalke twice in Champions League action and won both matches, 3-0. A similar result seemed to be in the cards when the two teams released their lineups.

Chelsea’s problem this week was the same one they had for much of last season: poor finishing. Without Diego Costa on the field, presumably resting in advance of Chelsea’s weekend showdown with Manchester City, the team lacked a striker capable of punishing Schalke’s myriad defensive miscues. Didier Drogba looked less like the Drogba of old and more like just old Drogba. And Schalke, for all their organizational issues of late, still have a number of quality players, including Klaas-Jan Huntelaar, who saved the Germans a point with a second-half goal.

Going forward, the question for Chelsea is: Can they find a second goal scorer to take the minutes Costa cannot play? Costa himself has been converting at an absurd rate, hitting for goals on around 50 percent of his shots in the Premier League. That won’t continue. Despite his strength, or perhaps because of it, Costa has a history of muscle injuries and should not be counted on to regularly play three matches in eight days.

Loïc Rémy will get more chances to play as a striker, but you should also expect José Mourinho to try German World Cup hero André Schürrle in the role at some point. Without that second striking option locked down, Chelsea are going to keep dropping winnable matches, despite their treble-winning potential.

Speaking of Chelsea, Cesc Fàbregas in blue looks wrong. I know, I know — we’ve been seeing it for weeks in the Premier League. But it’s still super weird. Watch his first goal and tell me it isn’t weird.

See?! Weird! It feels like he’s just defected every time he comes running in behind Eden Hazard.

But it’s not as weird as former Chelsea man Frank Lampard warming up in Munich for Manchester City: 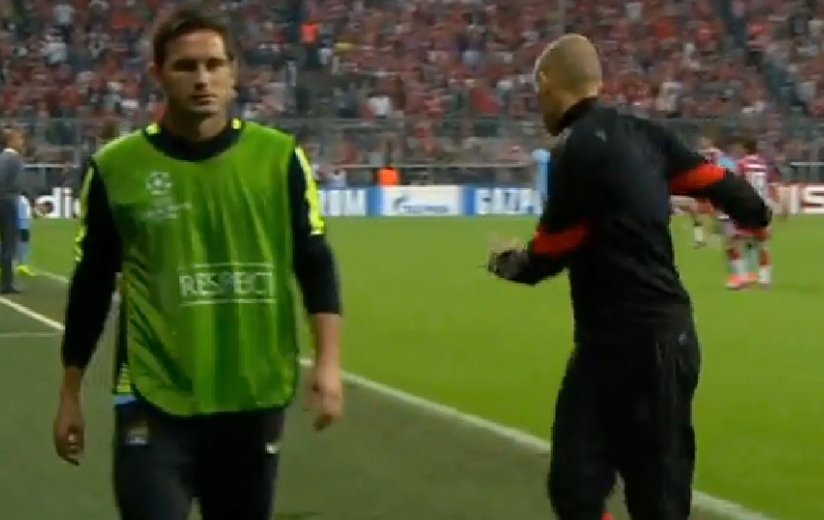 Gah! There he is, next to his former Chelsea teammate Arjen Robben (pictured here right before falling over). Frank, get to New York quickly, because you don’t belong in Manchester. For the first 20 minutes of Bayern’s 1-0 win over Manchester City, all-everything Austrian full-back David Alaba played as a left center back, in what looked like a 3-4-3 formation. Then, suddenly Alaba was pushed forward, playing right behind Robert Lewandowski, functioning as a no. 10. He would occasionally drop back, alongside Philipp Lahm, and play as a central midfielder for stretches. And he did all these things well.

He was steady in defense, distributed the ball, and was dangerous in attack. The worst that could be said of Alaba’s performance — which was in many ways mystifying — is that his flex role seemed somewhat inefficient, requiring newly acquired Juan Bernat to start over Arjen Robben.

So, what does all this tinkering mean?

Alaba is one of the best full-backs in the world and one of the most versatile players in the world. Former Bayern manager Jupp Heynckes moved Alaba to the back line relatively late in Alaba’s developmental process, as a means of getting the Austrian into the lineup. For his nation, Alaba plays as a central midfielder. Is Bayern manager Pep Guardiola going to convert Alaba back to the midfield, as he did with Lahm? Perhaps Guardiola just saw Yaya Touré looking a step slow and tried to exploit the situation. Or maybe we’re seeing Guardiola really putting his stamp on this Bayern side.

Guardiola has a surplus of quality weapons and a number of key injuries to overcome, so why not make a three-man midfield comprised of the world’s two best full-backs and a Spanish legend? Either way, the composition of Bayern’s lineup will be fascinating to track as this season presses on.

Perhaps we should stop being surprised every time a big club heads to Piraeus and returns without a win. Olympiacos’s 3-2 win over last year’s finalists, Atlético Madrid, was definitely jarring. And Atleti won’t be happy to hear that no team has won a Champions League final after losing their first match in the competition. Here’s the thing about that stat, though: It’s interesting, but it is not predictive.

Olympiacos are very good at home. We saw that last year, when they advanced to the round of 16 and left David Moyes’s Manchester United team in a big hole, heading back to Old Trafford (a hole United did climb out of, in what would prove to be the brightest moment of Moyes’s dim tenure). The atmosphere is one of the best in Europe, and when Olympiacos got an early wonder strike, the noise in Karaiskakis Stadium was insane.

Atlético are replacing key pieces. The biggest one is Costa, but former Bayern striker Mario Mandzukic is a more than capable replacement. Both are adept at holdup play, and in the air. (Mandzukic scored on a beautifully placed header late in the first half.) Costa is more fluid on the ball, but both players finish well. Mandzukic is less likely to do gross things to Pepe, but that’s probably for the best.

The situation at left back, with Cristian Ansaldi replacing Filipe Luís, who followed Costa to Chelsea this summer, is a bigger issue. Whereas the responsibilities for strikers in Diego Simeone’s setup are relatively straightforward, the responsibilities for full-backs are pretty complex. Atlético’s system of pressure requires precise timing and knowledge of one’s assignments; it isn’t about energy or ball chasing, it’s about funneling the opposition’s attack out wide and then smothering it.

Ansaldi, who has not been getting consistent minutes in league play, wasn’t quite up to speed, and his mistimed recovery led to Olympiacos’s second goal. He was again out of position on the third, though it was right after an ill-timed giveaway at midfield. Ansaldi looked good except for these mistakes, which will be cold comfort for the Argentinian right now, but bodes well for the team going forward.

Which is all to say, there is no need to panic for Atlético. Full-backs need to get better, in September? The team had trouble in a brutally hard road environment? Fine. If those are the biggest worries for a team with the tactical mind of Simeone at the helm, everything’s going to be OK. Atlético are still unlikely to win the tournament, keeping alive a dumb statistic, but they remain a great bet to advance out of their group and do some damage in the knockout stages.

The Sound and the Fury: Are Florida and Will Muschamp Shouting Into the Void?