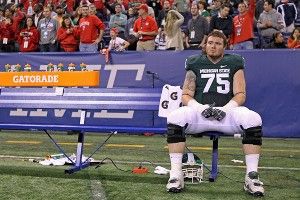 On Monday, the Big Ten powers that be held a conference call to outline their thoughts on a college football playoff system. Their preference, they declared up front, is to do nothing. “I think if the Big Ten presidents were to vote today, we would vote for the status quo,” Nebraska chancellor Harvey Perlman said, and then Perlman and Big Ten commissioner Jim Delany spent the rest of the call trying to convince the media that they were not stonewalling but were open to any and all ideas, including a four-team playoff that isn’t dependent on conference champions, if that’s what everyone in those other conferences really wants, because the Big Ten isn’t going to stand in the way of progress unless they have enough leverage to stand in the way of progress.

I was not on the call, but I didn’t have to be, because I’ve had the same conversation with my grandmother. In this moment, the Big Ten reinforced its reputation as a kvetchy relic so steeped in self-regard that it names its divisions with a pair of indistinguishable L-word descriptors and then refuses to change course amid the outcry. (I would consider myself “highly engaged” in Big Ten culture, and I have zero idea whether my alma mater belongs to Legends or Leaders. In fact, I’ve ceased to care.) But then, the Big Ten has no reason to care what its fans think because they know they’ve already got us hooked, which explains why I subscribe to a cable network that, for six months of the year, broadcasts hagiographic documentaries about Lou Henson and reruns of Michigan water polo matches.

The Big Ten Network, of course, was a stroke of brilliance. It makes so much cash for the conference that they really don’t have to care about public perception; they rely on the fact that Midwestern land-grant colleges will continue to churn out millions of blind loyalists (like me) for decades to come, even if the Big Ten never wins another national championship, even if the Midwest recruiting base continues to deteriorate, even if it keeps ceding competitive ground to the SEC and the Pac-12 and the Big 12. Delany, the conference commissioner since 1989, has long been an unabashed BCS apologist, and wields enough power that he isn’t going to give in to baiting from the SEC, which has proposed a four-best-teams, no-strings-attached playoff, and has said it won’t budge from that stance and has declared the Big Ten a fraidycat at every turn in these negotiations.

That, of course, is what the Big Ten’s inscrutable conference call was about: negotiation. Even as Delany says he is potentially OK with the four-best-teams model, even as he now pillories the same polls that formed the basis of a BCS he’s been propping up for years, he can point to his concessions. He will say that he’s already given in on the idea that semifinal games should be played on campus sites, and he will say he’s given in on the conference champions model, and now he can say his contingent has given in on their preference toward the status quo. (Delany also raised the idea of a playoff selection committee, which is the best possible solution, but I am so suspicious of his motives that I wonder if he brought it up just to further muddy the waters.) And the more the Big Ten is able to bitch and moan about these concessions, the more they can argue that the whole negotiation is too complex and that rather than tinkering and arguing, we should just preserve the status quo, because the status quo isn’t so bad, now is it?

My hope is that I’m overreacting here. My hope is that this call was the last desperate sniveling of the Big Ten, and that it is recognizing that it cannot sabotage the future of college football for the sake of preserving an unpopular past. But I have no reason to trust them, because nobody plays the lumbering brontosaurus quite like the Big Ten does.