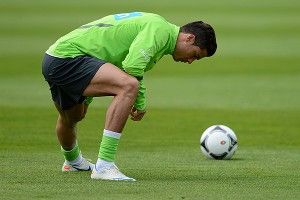 After a brief vacation, the Men in Blazers are back. In this week’s edition, Michael and Roger handicap all the drama soon to begin at the 2012 Euro Championship from Polkraine. For those uninitiated GFOPs, the tournament is like the World Cup, but without the United States squad and the Japanese national anthem.

After channeling the late, lamented Paul the Octopus and predicting which countries will advance, Michael and Roger analyze the latest in Team USA fortunes as Jurgen Klinsmann’s men prepare to take on not just Antigua, but Barbuda as well. The gents find time to retreat into the comfortable world of the English Premier League, which lurks like an ever-present lukewarm bath, read your telegrams, and invite readers to compete in the Men in Blazers Inaugural Euro Bracket Challenge for some truly mediocre prizes.

Previously on the Grantland Network:
The Basketball Jones
The Triangle Podcast