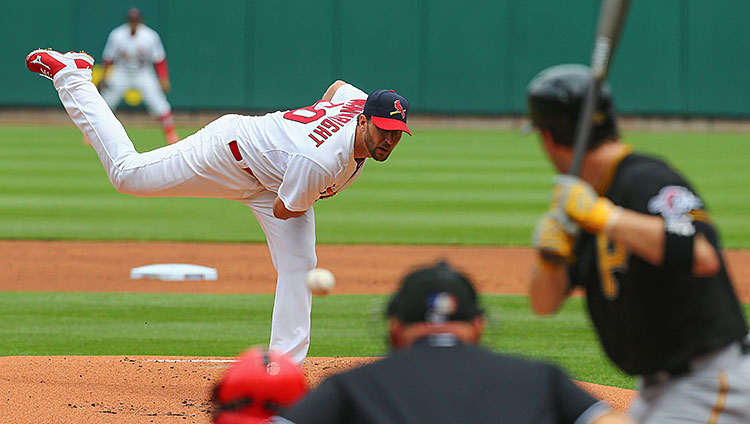 In terms of alcohol, pitching is the craft beer of baseball — subtle enough to be considered artistic, but earthy and powerful enough to avoid associations with more pretentious spirits, like that one whiskey you can find only on raft distilleries off the coast of the Outer Hebrides during a blood moon.

My premise is that pitching is enjoyed by intelligent fans and that we should judge all the rubes who think home runs are the best part of baseball. There’s nothing like a devastating pitch, whether it comes in at 101 mph in a roughly straight line, or swoops in slowly with diagonal parabolic action. It satisfies on both a visceral and aesthetic level. Today, we’re honoring the best pitches of the year so far, with GIFs courtesy of our friends at the excellent Pitcher GIFs, which has quickly become one of the best daily baseball stops online.

Yordano Ventura, Royals. FanGraphs and the Baseball Prospectus leaderboards agree that he’s the fastest in the game among starters (we’re going to focus on starters here), and if that weren’t enough, he’s got the ninth-best “rising action” on his four-seamer … and he throws much harder than anyone above him on that list. Seriously, look at the way this really, really fast pitch drops, totally mystifying the batter:

Masahiro Tanaka, Yankees. Between the splitter, the cutter, the sinker, and the good ole straight cheese, there are four main types of what we call a “fastball.” Take every MLB pitcher who has thrown at least 100 of one type or another, and you’ll find just one man, with one pitch, who gets batters to whiff more than half the time they swing. It’s Tanaka, and it’s the splitter. (His splitter also produces the third-best ratio of ground balls per balls in play among all fastballs, even beating every sinkerball pitcher except Justin Masterson and Dallas Keuchel.) With Tanaka, it’s the disguise and contrast that counts — he throws it 87 mph, just 5 mph slower than the fastball, but it ends up about eight inches lower:

Jon Lester, Red Sox. Mariano is gone, and while it hurts to give this award to someone from Boston, he’s got the most valuable cutter in the game, and there’s really no arguing against its nasty movement:

Justin Masterson, Indians. Quick lesson on what we mean when we measure “vertical movement.” While horizontal movement is easy — does the ball go left or right? — gravity makes measuring the y-axis a bit more complicated. So instead of simply looking at how high or low the pitch goes, PITCHf/x takes gravity out of the equation and measures how high or low a ball goes versus a pitch with no spin thrown at the same speed. Since all fastballs have backspin, all fastballs have a positive value, i.e., they “rise” compared to a spinless pitch (even though they sink relatively, due to gravity). Some rise more than others, and some are nearly straight. But all of them have positive values … except one. Somehow Masterson’s sinker, alone among its kind, has negative vertical movement. Unlike all the other sinkers in the game, his actually sinks, which is supposed to be impossible for a pitch with backspin. And while that probably means he puts some topspin on the ball like a slider, I reject that explanation and attribute this to MAGIC:

Adam Wainwright, Cardinals. It’s important to note that movement is not the be-all and end-all of curveballs. Movement with control certainly helps, but factors like variety, speed, location, and the extent to which other pitches set it up are equally, if not more, important. Let’s be honest: Curveballs that break down and away are awesome. And since Wainwright is a terrific pitcher with the second-most valuable curve in the game, I feel fine giving him this award on the basis that he’s the only pitcher who gets nine inches of both vertical and horizontal break on his hook. Behold the terror:

Stephen Strasburg, Nationals. Among starters, Mark Buehrle has the slowest four-seam fastball in MLB, averaging 83.81 mph in 2014. Strasburg’s changeup travels 88.69 mph and has the highest whiff rate among all starters — which we can attribute to the fact that it’s really fast and ends up four inches farther right and six inches lower than his straight fastball. In other words, it’s a changeup that behaves sort of like a screwball when compared to his heat. I feel like crying on behalf of hitters everywhere. Watch this pitch move down and right:

C.J. Wilson, Angels. Two men have thrown knucklers this year. One is R.A. Dickey, who has thrown 717. The other is C.J. Wilson, who threw one, for some reason, against Houston. (Of course it was against Houston.) I’m giving him the nod over Dickey simply because I love that he tried it only one time, and because of the subsequent quote: “I literally threw him a knuckleball because … I had no idea what to throw him here.”

Max Scherzer, Tigers. This is the whiffiest pitch in baseball among starters, producing nothing but a whoosh of wood on 58 percent of all swings. Most incredible of all? It practically has no cutting action, so while most righties have right-to-left action on their sliders, Scherzer’s is practically straight. Along with all the swings and misses, it gives him the ability to pick at the outside corner against right-handed hitters with a pitch that looks like it will veer far outside until it comes back to nibble at the plate. No other righty starter does that to the same extreme, and CC Sabathia is the only lefty who comes close.

True Value: Breaking Down Kevin Durant's Past, Present, and Future