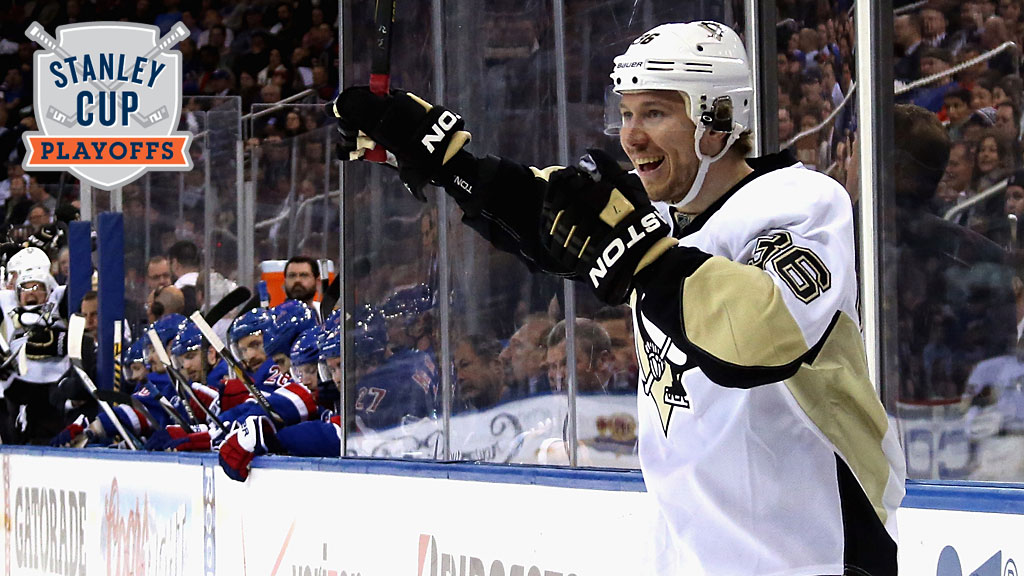 Wasn’t it just last week the Pittsburgh Penguins were in mountains of trouble? Their top line wasn’t producing, their special teams were a mess, and they were two losses away from becoming a punch line.

Now the Penguins are up 3-1 in their series against the New York Rangers and their issues have all but disappeared. In the first round against Columbus, their penalty kill was dreadful, Evgeni Malkin and Sidney Crosby were both held without a goal until the sixth game of the series, and Marc-Andre Fleury’s playoff ability was once again in question. Online commentators (myself included) were wary about their lack of depth and looming puck-possession problems.

While the Penguins have racked up the wins over the last several years, they haven’t been a juggernaut by way of puck possession for some time. Pittsburgh’s score-close Corsi was 16th in the NHL in 2014, a percentage point back of 13th-ranked Columbus and well back of sixth-ranked New York. The Penguins have cruised through both opponents thus far, with a playoffs-best Corsi of 58.1 percent.

Even though Crosby has been “cold” — recording just nine points in 10 games (the slacker!) — the Penguins are doing just fine without him, thank you very much. Pittsburgh has scored 25 goals at five-on-five in these playoffs without Crosby on the ice, and has conceded just 17. Pens coach Dan Bylsma moved Malkin onto Pittsburgh’s top line with Crosby during the first round. That had the unintended effect of giving defensive center Brandon Sutter a less arduous role, and paired him with Jussi Jokinen, who, with 57 points this past season, was the 31st-highest-scoring winger in the NHL.

That puts Jokinen within a point of producing like an average first-line player. Not bad for somebody who, just a week prior to last season’s trading deadline, was placed on waivers and saw 29 NHL general managers miss a chance to pick up him and his $3 million contract for nothing. Ray Shero, sensing opportunity, traded for Jokinen, giving Carolina a bag of pucks for its troubles, but only if the Hurricanes agreed to pay half Jokinen’s salary. The Jokinen pickup wasn’t even a footnote in the Big Book of Penguins 2013 Acquisitions. (Bylsma’s quote in that story, suggesting that Jokinen could be a fourth-line player, is hilarious in retrospect.)

Jokinen is tied with Marian Gaborik as the leader in NHL playoff goals, with six. It’s not like he’s a flash in the pan, either. After being acquired in the 2009 season from Tampa Bay for a song, Jokinen scored 65 points one season and 52 the next, becoming the second-highest-scoring forward on the Hurricanes. Fifty-point players are surprisingly rare in the NHL, even the ones who play alongside the elite. Jokinen is one of 60 NHLers to record three 50-point seasons since 2009-10.

His 23 percent shooting rate and PDO of 106 during the playoffs are likely to drop, but that doesn’t take away from his production during a rare time when Crosby and Malkin have struggled to score goals. The important thing is for Jokinen to sustain his defense. The Penguins’ bottom nine forwards were awful during the regular season, but have picked it up in the playoffs defensively. This has reduced the load on Fleury, who has faced four fewer shots per 60 minutes of five-on-five time this postseason compared with the last. Not to take anything away from Fleury during his three-game win streak, but he’s faced just 24 shots per game over the last three, as New York has run into a surprisingly competent Penguins defense, which has been bolstered by the return of Paul Martin and Kris Letang.

So maybe it’s not doom and gloom for the Penguins. They are, however, still nine wins away from the Cup and will have to make their way through either Tuukka Rask or Carey Price, and most likely either Chicago or Los Angeles. For the first time in a while, however, the tangible contributions from Penguins players other than Crosby and Malkin are a driving force behind the team’s wins.

Oh, and Pittsburgh has yet to lose in regulation so far during the playoffs. That seems somewhat notable.

The Legend of Tony Plush