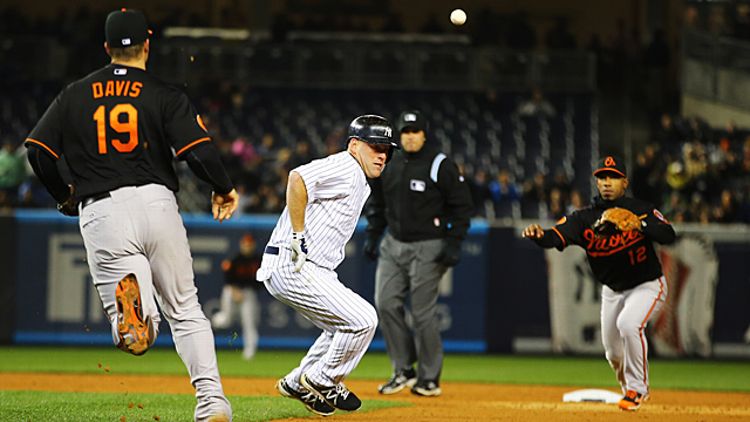 On Friday, April 12, the Yankees beat the Orioles, 5-2. New York and Baltimore play each other 19 times this year, and that was the first matchup of the season. In what has become a frustrating annual tradition, it was also my first experience in 2013 with the North Carolina baseball blackout. I live in Chapel Hill and could not watch the game on either the MLB Extra Innings package or Time Warner Cable, the provider with a near-monopoly in my area. I was caught in a catch-22 that has become all too familiar for baseball fans.

Last year, I wrote about the Kafkaesque legal conflict that led to this impasse, and the shape of its origins. Essentially, baseball’s blackout map covers the entire country, and North Carolina happens to be in the demarcated zone allotted to the Washington Nationals and Baltimore Orioles. Never mind that I’m more than 300 miles from Baltimore and D.C.; everyone has to be covered, and nobody is outside the net. This means I can’t watch the Orioles or Nationals on any of MLB’s television or computer packages. It’s a move designed to protect local cable interests, and it makes some sense. If I lived in Brooklyn, for instance, I wouldn’t be able to get Yankees or Mets games via the MLB packages, but I could watch them on the YES Network and SNY through my cable provider.

Here’s where it gets complicated. The Mid-Atlantic Sports Network carries Orioles and Nationals games, and is jointly owned by the two teams. They demanded analog tier coverage (more on that in a moment) throughout North Carolina back in 2005, and Time Warner refused, on the basis of limited demand in the state. A contentious legal battle ensued, and when I wrote my first blog post on this last March, it had progressed to the U.S. Court of Appeals for the Fourth Circuit. Throughout that fight, Time Warner customers were unable to watch the Orioles or Nationals. (An alternative cable service, AT&T U-verse, also doesn’t carry MASN.)

For me, as a Yankee fan, this is a minor annoyance. It just means there are 19 games against the Orioles that I can’t watch each season. But for Orioles and Nationals fans — and they do exist in North Carolina — it’s a major ordeal. For those unwilling or unable to spring for satellite TV (or watch every game in a bar, I suppose), there is no recourse.

This kind of thing is going on all over America. Sometimes it’s a dispute between cable companies and cable providers, and sometimes it’s just a geographical oddity. Places like Iowa and Las Vegas are blacked out for six teams, to use an egregious example, and cable stations in those areas can’t begin to supply the missing coverage. But the absurdity gets worse. Hawaii is blacked out for every West Coast team, and if you’re a Mariner fan living in Alaska? Tough luck. North Carolina is far from the only victim.

To understand how we’ve arrived at this point, it’s best to revisit last year’s timeline, with a new addition at the end to reflect the decision of the Fourth Circuit.

2005: MASN, which is owned by the Orioles and Nationals, began televising Nationals games in 2005 and Orioles games in 2007. Negotiations with Time Warner Cable began in 2005, and quickly escalated to MASN demanding that Time Warner offer the station as part of the analog tier across the state. Time Warner balked, a move MASN alleged was designed to protect its own regional sports networks, though Time Warner insisted it was due to lack of interest in the Orioles or Nationals in North Carolina. The company estimated it would cost $10 million per year to carry MASN, involve deleting existing analog stations to make room, and require charging subscribers 60 cents more per month. Even with the hike, Time Warner doubted MASN could generate enough revenue to make up the high cost of carriage. As an alternative, it offered MASN analog coverage in the eastern half of the state and digital coverage in the west.

May 2007: It became clear that no resolution was forthcoming, and Time Warner rejected MASN’s request for carriage.

June 2007: MASN filed an arbitration demand with the American Arbitration Association. MASN alleged Time Warner had unfairly discriminated against it and hindered its ability to be competitive, using as evidence the fact that Time Warner carried Charlotte Bobcat games on its analog tier via its own affiliate, News 14. To MASN, this constituted unbalanced treatment.

December 2007: An arbitrator ruled in favor of MASN. He then talked about the case to the trade press — a violation — and Time Warner successfully had him removed.

December 2010: The FCC, which had placed the item “on circulation,” granted Time Warner the right to appeal, and then reversed the previous two decisions, saying Time Warner refused carriage for “legitimate and nondiscriminatory reasons.” This was the first body to recognize that Time Warner stood to lose money from carrying MASN, and that it was at least a little misguided to use the News 14/Bobcats example, because that station cost Time Warner no additional money. This allowed Time Warner to exclude MASN from all cable packages. MASN appealed to the U.S. Court of Appeals for the Fourth Circuit.

May 2012: The Fourth Circuit found itself in full agreement with the brief from the FCC (and Time Warner), and ruled against MASN. The court ruled that Time Warner had made a “legitimate, non-discriminatory” business decision, that they had evidence from the early days in the form of an e-mail exchange, and, with the reduced offer of the combination analog/digital carriage that had been on the table from the start, hadn’t acted as a monopoly.

Which brings us to 2013, Year 9 of the dispute. MASN’s last legal option is an appeal to the U.S. Supreme Court, and every indication is that it won’t pursue that avenue. Last week, I decided to follow up on where things stood, and whether negotiations had resumed in the wake of Time Warner’s legal victory. After all, MASN had vowed to “continue to explore ways to bring our exciting lineup of live sports to Time Warner Cable’s subscribers in North Carolina” when the decision was handed down.

I spoke with various representatives from MASN, Time Warner, and Major League Baseball. Here’s what they had to say:

MASN: “The only thing I can say is that we are in continuing conversations with Time Warner.” — Jim Cuddihy, executive vice-president of marketing, programming, affiliate relations

Time Warner: “We remain willing to carry MASN in a way that represents a good value for all our customers. We have no progress to report.” — Maureen Huff, vice-president of public relations

While you’d have to look hard to find a “good guy” in this situation, it became clear that it’s also tough to pinpoint a villain. Time Warner legitimately believes it would lose money, and it has the data to back up the claim that Orioles and Nationals fans are scarce in North Carolina. Anyone who lives here recognizes that; it’s a basketball and football state anyway, and the baseball fans who do exist tend to support the Braves. And in the absence of monitoring nonexistent North Carolina television ratings for these teams, Time Warner can only track demand, as represented by how many people call in asking for MASN coverage. That demand is low.

It would be easy, then, to wonder why MASN doesn’t just accept the offer of digital carriage in the west and analog in the east. It has been trounced in court, after all, so why not admit defeat? Sour grapes? Cutting off the nose to spite the face? Probably not. The potential problem here is that companies like MASN often have a clause in their contracts with other cable providers that allows the cable providers to move MASN to a digital tier if MASN accepts that deal from any other cable provider. So if MASN agreed to a digital offer in western North Carolina from Time Warner, it might subject itself to losing analog coverage in more attractive areas like Maryland or Virginia, which would result in a huge loss of revenue. I couldn’t confirm that MASN faces this dilemma, so take this as pure speculation, but it’s one of the few explanations that makes any sense. Why else would they refuse the secondary deal that would spread their channel — and their teams — into a new market?

A pressing question I asked last year was why MLB wouldn’t take a “white knight” approach and allow blacked-out North Carolina residents to watch Orioles and Nationals games on the TV and computer packages until the Time Warner-MASN dispute is resolved. The answer there is obvious; if they inserted themselves into the proceedings, it would automatically put one side at a disadvantage. MASN’s only weapon in North Carolina is demand, which will theoretically grow as northerners of all stripes move into the state. If MLB offered coverage on its packages, that demand would disappear overnight and destroy what little negotiating power MASN has left. And MLB gets a lot of money from regional sports networks like MASN for the right to carry baseball. They’re not about to alienate a cash cow, and for revenue purposes, they want companies like MASN to be carried as widely as possible.

It’s a standoff. None of the three organizations are willing to resolve the issue, and all of them have good business reasons. The process has come to a virtual halt, and the big loser, as always, is the consumer.

The one ray of hope is that the entire system will be obliterated in the courts. Four fans filed a lawsuit last year in a U.S. District Court alleging that the blackout policy violates antitrust law. (In December, they joined with new plaintiffs and added the NHL as a defendant.) It’s worth reading Wendy Thurm’s piece for Fangraphs on why it might succeed, and Jeff Passan’s piece for Yahoo on why it probably won’t. Win or lose, the mere existence of the lawsuit proves a point that has become self-evident from the byzantine proceedings in places like North Carolina: When such an absurd system is so thoroughly entrenched, nobody is advocating for the fans. It is preserved by greed and self-interest, and it can only be destroyed from the outside.