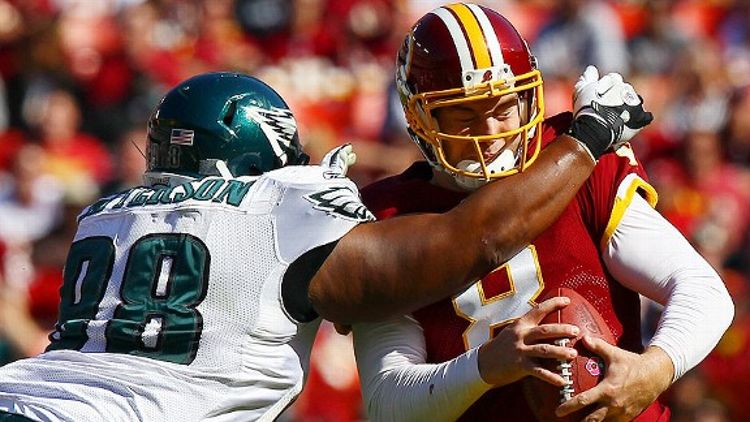 The following is a list of adult men who threw passes on Sunday in the National Football League: John Beck, Christian Ponder, Kyle Boller, and … wait for it … Vince Young. And if that wasn’t enough to have fans of repulsive quarterbacking Harbaugh handshaking each other, with Oakland quarterback Jason Campbell out with a broken collarbone, the Raiders are reportedly close to acquiring Carson Palmer. If the deal does happen, there is little doubt that at some point this season, he will be joining the above list of esteemed field generals. Good news for Raiders fans, bad news for those of us who couldn’t wait to see Terrelle Pryor make a run at scoring quadruple-digit BQBL points in a single week.

But let’s not get too far ahead of ourselves. This week there was plenty for fans of failure.

Washington Redskins (Rex Grossman and John Beck), 78 Points: Rexy is too sexy for his starting job. Grossman, the quarterback who followed his team to Super Bowl XLI, looks like he is going to be following Beck on the depth chart. To best demonstrate just how poorly Sexy Rexy played this week against the Eagles we have to walk through his performance, horrendous interception by horrendous interception:

Rexy’s Inner Monologue: “OK, what do we have here? Two of my receivers are running the same route in the same place. Odd. That is certainly drawing a lot of attention from the secondary, isn’t it? Well, if they both decided to run posts right next to each other, then there is double the chance of one of them coming down with it, right? OK, here goes nothing … ”

Rexy’s Inner Monologue: “Nice! Got through the play action without fumbling. Oh goodie, Jabar Gaffney has a step on Nate Allen deep downfield, this is going to be a big play. It feels strange having this type of protection. I’ve seen Tom Brady make this throw a million times to Jabar; he just steps into the throw and leads Gaffney into the middle of the field. You can do that too, Rex, oh wait, I’m not so sure you can do that too, Rex, they’re pretty far downfield at this point. OK, here goes nothing … ”

Was It “Sexy?”: No, actually humbling for a guy who is supposed to have a strong arm.

Rexy’s Inner Monologue: “Look at Fred go, he can really move for a big fella, huh? He is going to break right in front of that scary Kurt Coleman guy, isn’t he? OK, here goes nothing. Wait, he didn’t break at all … ”

Was It “Sexy?”: Almost. Have to put this one on Fred Davis, though; tight ends shouldn’t be stutter-stepping more than 10 yards downfield.

Rexy’s Inner Monologue: “Whoa, the entire defensive line is unblocked and trying to murder me. Wait, did I call a screen pass? No? OK, no problem, I’m Rex Grossman, I am a modern-day Randall Cunningham, I’ll just roll to my left. OK, now I just have to complete a pass. Man, this is going to be hard throwing across my body. Should I go short, mid-range, or deep? Yeah, I’ll go deep, across my body to a receiver covered by a safety who already has two picks. OK, here goes nothing … ”

Was It “Sexy?”: Yes. Very sexy. This had all the makings of a sexy interception: bad decision, worse throw, and led to a benching.

Rex brain-farted himself out of the game and was replaced by Beck. I had never heard of John Beck, so I did some extensive research and found out that he is the father of three sons, an eagle scout, the third cousin of talk show host Glenn Beck, and the brother-in-law of mayonnaise. Wait, what? Maybe my definition of “extensive research” should expand beyond checking Wikipedia.

Hopefully we will get the chance to learn more about Beck when he is named the Redskins starter in coming weeks. He certainly earned the opportunity. He ran for a touchdown, went 8-for-15, and didn’t complete a pass to Eagles safety Kurt Coleman once.

Minnesota Vikings (Donovan McNabb and Christian Ponder), 65: Donovan McNabb is no stranger to mid-game replacement. Last year, he was replaced by the BQBL’s Week 6 top scorer, Rex Grossman, and in 2008, he was pulled mid-game in favor of another BQBL favorite, Kevin Kolb. But this time it feels different. McNabb wasn’t really even playing that bad. He had no protection, was sacked five times, and went 19-for-24 for 177 yards with no picks. When McNabb was benched in the past, it was always a “Donovan and Head Coach X don’t see eye to eye” sort of thing. This time it was more a “Playing Donovan at quarterback isn’t the right thing for the franchise” sort of thing. Instead of a spat, this felt like a breakup. Donovan’s mom even left her seat on national TV after a third-quarter sack. We will see what the future holds for Donovan, but it is becoming clear what the future holds for Vikings BQBL owners: Christian Ponder.

Here’s what we know about Christian Ponder: His first name is Christian, his last name is Ponder, he went to Florida State, he will soon start at QB for the Vikings, and he used to have a super-hot girlfriend named Kacie McDonnell. Google her yourself, weirdos. He also didn’t play terribly for the Vikings, but didn’t provide the type of spark and inspiration that Denver’s Tim Tebow did coming off the bench. But come on, the only man that can spark and inspire like Tim Tebow is Bob Marley. What was that? Too cheap of a joke? At least it wasn’t a “ponder” pun.

Miami Dolphins (Matt Moore), 49 points: Matt Moore did everything that he could to erase any chance the Dolphins had of winning this football game. It started well for Moore and Miami. They got on the board with a field goal, and then, when Jets linebacker/special teams goon Garrett McIntyre decided he would attempt to field a kickoff, they were gifted the ball on the Jets 18. The score was 3-0, the Dolphins had the ball on the Jets’ 18, and New York’s offense thus far had moved the ball a combined five yards on two possessions. In steps Matthew Erickson Moore with a chance to give his Dolphins a 10-0 lead on Monday night. Whoops. Moore threw the ball, but Darrelle Revis threw his target aside and shimmied his way through the Dolphins offense for a 100-yard TAINT. The rest of the game consisted of Matt Moore bad throws, Dolphin receiver dropped balls and another Revis interception. The second pick wasn’t really Moore’s fault; he took a shot from an unblocked David Harris that was so vicious, you got the feeling Harris himself felt bad about it. Moore was hit so hard that one of the most merciless linebackers in the league, Bart Scott, came over to help him up/check if he was alive. Don’t worry BQBL Dolphins owners, he was.

Jacksonville Jaguars (Blaine Gabbert), 27 points: Blaine Gabbert is just kind of meh. He doesn’t show the promise of Andy “Red Rifle” Dalton or Cam “I Resuscitated Steve Smith” Newton but also doesn’t even terrible his way to huge BQBL numbers either. (Yeah, I know. I use verbs that aren’t verbs. Sorry, guys.) Like on Sunday, he got BQBL points for having less than 50 percent completion rate, under 150 yards, and no passes of 25 or more yards. But Blaine also didn’t toss any Sexy Rexy-esquey interceptions, and had no fumbles lost and no arrests. He is just, like, there. He doesn’t even have the title of “NFL Quarterback With the Worst Hairstyle” now that Curtis “Goldilocks” Painter has arrived on the scene. He needs to do something to stand out. If I were Gabbert’s publicist, I would have him record a Curtis Painter dis record or get a neck tattoo or something that will get him in the news cycle, because mildly ineffective one-touchdown games and the second-most ridiculous haircut among NFL QBs is not going to get you that Campbell’s Soup money that Donovan McNabb is going to lose soon.

Carolina Panthers (Cam Newton), 27 points: Only Cam Newton can lead his team to a 14-point loss, throw three interceptions, not throw for a single touchdown, and still make you say, “Decent game out of Cam this week.” He notched 27 BQBL points for three interceptions plus the 12-point three-turnover bonus, but his picks weren’t all that bad. Time to make excuses for Newton’s interceptions because he’s so much fun to watch we want him to be good, and I feel like we can all collectively will him to be good like a self-fulfilling prophecy:

Got it, now we can all go back to thinking Cam Newton is the future of the NFL. Nothing to see here.

Oakland Raiders (Jason Campbell and Kyle Boller), 25 points: Look, it is a shame that Campbell went down, especially with the year that he and the Raiders were having. We don’t root for injuries here at the BQBL, just spectacular failure. That said, since Kyle Boller and (please please please) Terrelle Pryor are the alternatives to waiting for the bye week to incorporate Carson Palmer, I wouldn’t be surprised if instead of trying to teach him the offense, they just give him a Sharpie and a notepad and send him into the huddle.

Detroit Lions (Matthew Stafford), 22 points: Matthew Stafford had 293 yards, two touchdowns, no picks, and would have won the game if anyone in the NFL could tackle Ted Ginn Jr. He really only scored BQBL points for a safety, so if you started Matthew Stafford this week, well done, you deserve a Harbaugh handshake.

Indianapolis Colts (Curtis Painter), 21 points: The table was set for Curtis Painter to be the hero. He got the ball with 2:36 left in the game, was down by a field goal and poised to win over his teammates and Indy fans with a game-tying or game-winning drive. Then Pierre Garcon fumbled. It was recovered by the Bengals and run into the end zone. That gave Painter the ball back and the chance to throw a meaningless interception before time ran out. His teammates and Indy fans will have to wait until next week to be won over by Painter, but his BQBL owners are already there.

Cleveland Browns (Colt McCoy), 20 points: I think Colt McCoy has a really bright future in the NFL. Full disclosure, that is solely based on the fact that he is named Colt McCoy. There is no chance I would feel this way if he were named Herb McCoy.

New Orleans Saints (Drew Brees), 18 points: Oh, looky here, nice to have you show up on the BQBL Summer Jam screen, Mr. Brees. You are fortunate we haven’t implemented bonus scoring for game-losing interceptions, or as I like to call it, the “Romo Rule.”

Welcome to The Fabulous & The Flops of the NFL