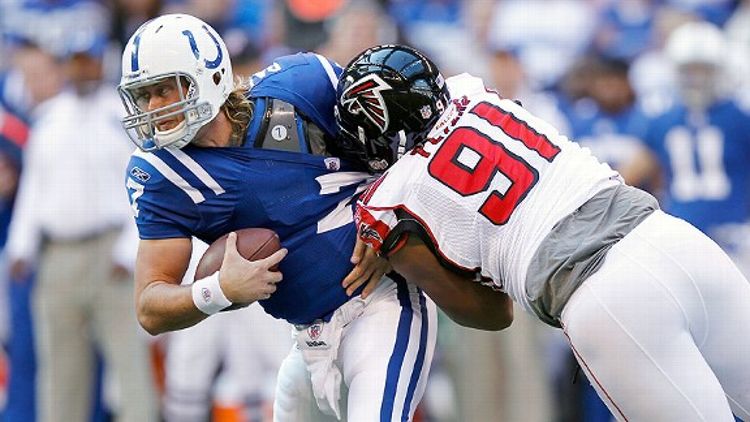 This week even Philip Rivers’ twin pick-sixes with a Romo chaser couldn’t top the duo of disgusting that was the Colts’ Curtis TAINTer and Orlovsky.

Indianapolis Colts (Curtis TAINTer and Dan Orlovsky), 72 points: Have you ever been watching Wheel of Fortune and Vanna has turned over every letter but one, making the answer so obvious that you are screaming it at the TV at the top of your lungs and the idiot contestant still can’t figure the phrase out?

That is exactly how Peyton Manning feels as he watches Curtis TAINTer play quarterback. No wonder he still wants to play this season. He doesn’t care if he is risks his career, or even his life, he simply can’t stand watching his position being played with this level of ineptitude.

1st Possession: Hands off to Delone Carter, who fumbles
2nd Possession: Throws an interception
3rd Possession: Leads Colts to a three-and-out
4th Possession, second play: Throws a pass off of a defender’s helmet, catches it, freaks out and then attempts to throw another forward pass. For real. That happened.

After TAINTer’s Bugs Bunny impression, I think we all would have totally understood if Peyton Manning put on a helmet, stormed the field, and took the next snap in street clothes. Unfortunately for Colts fans, Peyton had to stand on the sideline as TAINTer struggled to get anything done offensively, and Peyton’s baseball cap struggled to cover his fivehead. After completing 13 of 27 passes for 98 yards, TAINTer was eventually replaced by Orlovsky, who didn’t do that bad. He had four completions, 20 yards, and zero spaz attacks that made him run out of the back of the end zone.

San Diego Chargers (Philip Rivers), 50 points: What is it about Philip Rivers that makes it so easy for me to root against him? And how did he not make the Forbes list of the NFL’s least-liked players? I know I am not the only one basking in the schadenfreude of Rivers’ past two weeks. If you aren’t with me, the schadenfreude pool is warm and full of interceptions, so feel free to hop in. After two pick-sixes in the first quarter, Chargers BQBL owners were giddy; Rivers was on pace to score exactly 1.75 jabillion BQBL points. To be fair, he did settle down after those picks and put together quite a game, throwing for four touchdowns and 385 yards. But just when you thought that he was going to mount a magical comeback against the undefeated Packers … he Romo’d the game away. Rivers is now the league leader in interceptions with 14 and in making faces that look like Popeye with one really, really good one.

Arizona Cardinals (John Skelton), 42 points: For those of you unfamiliar with John Skelton, he is a poet laureate at Oxford and the tutor of King Henry VII. Oh wait, sorry, wrong John Skelton. This John Skelton is a second-year quarterback for the Cards who made his name by throwing touchdown passes to his tight end and brother, Stephen Skelton, at Fordham. How cute.

Without his brother there to block for him, Skelton had trouble simply getting out of the end zone. Skelton racked up back-to-back safety BQBL points with sheer force of terrible. Follow me as I take you inside the mind of a man who refuses to throw the ball away and takes a safety on consecutive possessions:

First Safety:
Title: “In The Grasp”
Situation: Second-and-7 from his own 5
Inner Monologue: “Okey dokey, they want me to run play action on my own 5. What could go wrong? Cool, got the snap without fumbling and faked the hand-off clean. Now if only I had someone to pass to. Hmmmm, should I throw the ball out of bounds or just wait here? I think I will just wait here. Whoa, two 400-pound monsters are holding me by my legs. That hasn’t happen since my brother Stephen and I went to Cancun on Spring Break.”
Corresponding Poet Laureate John Skelton Quote:
“No man may him hide
From Death hollow-eyed”

Second Safety:
Title: “Flipping The Bird”
Situation: First-and-10 from his own 9
Inner Monologue: “That last safety was embarrassing. At least this time I have a more room and they called a little roll out for me. What could go wrong? Oh man, no one open again. Let me just roll out a little further while Larry Fitzgerald gets himself open. I love it when he does that. Oh no, this defensive dude is gaining on me. Fine, if I am going to take another safety, this time I am going to do it with panache. Let me just flip the ball out of bounds behind the line of scrimmage as I fall to the ground this time. That would look cool.”
Corresponding Poet Laureate John Skelton Quote:
“YOUR ugly token
My mind hath broken
From worldly lust;
For I have discussed
We are but dust,
And run out of the back of the end zone like Dan Orlovsky we must.”

Skelton and the Cardinals’ offense did everything they could to lose this game, but their special teams blocked a field goal at the buzzer and returned a punt for a touchdown in overtime to give the Cards the win.

Seattle Seahawks (Tarvaris Jackson), 37 points: Is it possible that a guy who threw for no TDs and three interceptions looked good? Yes, it is possible, but that is not how Tarvaris Jackson looked against the Dallas Cowboys. Two of his picks he threw off his back foot and the other, I swear, he was trying to throw into the ground in front of him when it was picked.

Cleveland Browns and Houston Texans (Colt McCoy and Matt Schaub), 27 points: Not going to lie, didn’t watch this one. I try to keep an eye on all the bad quarterbacks for this column, but the mapping of which game went on which screen in the bar we watched at was a heated debate that I felt no need to interject in. I feel like the TV mapping in this one bar reflects the country’s collective interest. Colt McCoy and his Browns and Matt Schaub and his Texans were playing on a screen near the exit that faced the back of our heads. If this place had those little TVs in the bathroom, no one would pee at the urinal that was showing this game.

New England Patriots (Tom Brady), 21 points: Oh hey, Tom Brady, welcome back to the BQBL scorecard. Let’s see what you have been up to: two interceptions, a lost fumble, and two straight losses. On Sunday, you were beaten by Eli Manning in a late drive in a game that felt … familiar. I would have never been able to pinpoint exactly why this game felt so familiar if Fox hadn’t shown the David Tyree catch 2 zillion times.

Buffalo Bills (Ryan Fitzpatrick), 21 points: The Amish Rifle was confused. The Jets defense was doing the whole “I’m blitzing, no I’m not, I’m dropping back in coverage” thing it is so good at and tricked poor Fitzpatrick into throwing two picks. It is taking every synapse in my nervous system to keep my fingers from typing a “He went to Havard, how did he get tricked?” joke right now. Looks like I lost that battle.

Atlanta Falcons (Matt Ryan), 20 points: What are you doing here, Matty “Ice” Ryan? Blowout win, 275 yards, three touchdowns — how did you get 20 BQBL points? Oh yeah, you threw an atrocious pick-six midway through the second quarter. Why don’t DBs drop to one knee and pretend to chug a Smirnoff Ice when they pick off Ryan? Oh, because, they aren’t nerds who surf the net six hours a day, that’s why. Pretend I didn’t say anything.

Don’t forget to e-mail us for the weekly reader feedback post. Full disclosure: I still feel bad about going in on that dude who called me a “pinhead.” Sorry, little buddy.

The Color Purple Descends on the Eagles Season

The Fabulous & the Flops of Week 9