The Color Purple Descends on the Eagles Season 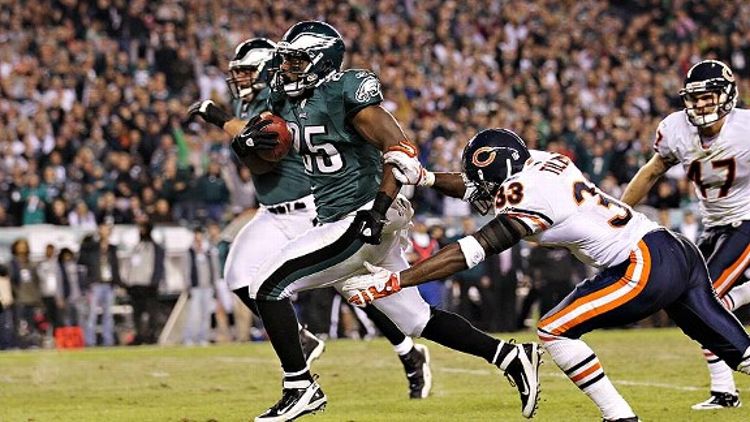 I would absolutely love to write a semi-objective piece about Monday night’s showdown between the Philadelphia Eagles and Chicago Bears. I’d like nothing more than to celebrate the game as a nationally televised coming out party for Matt Forte and LeSean McCoy (LESEAN MCCOY), the two best running backs currently playing in the NFL. Unfortunately, I have to bury the dead bird in my back yard first.

It’s so hard to pick just one moment from Monday night’s game that made me want to snort shattered glass. So I’m just going to go with the one when Eagles coach Andy Reid turned purple.

Like some kind of human mood ring, Reid was expressing the emotional color of most Eagles fans. It’s a hue that comes from lack of breathing, anxiety, rage and utter disbelief at the lack of basic football ability that has been a hallmark of this sensationally assembled, comically underperforming, and poorly coached group of players.

Why was Reid turning purple? It was the end of the first half and Jason Babin had just been called for roughing Jay Cutler. It was a controversial call, given that replays suggested Babin had been pushed into the Bears QB by offensive lineman Chris Spencer, and Reid passionately made his case to the referees, because in pro sports, screaming about a call usually gets it overturned. But really, he was turning purple because it was yet another example of how this game, like this Eagles season, was born under a bad sign.

Let’s take a look at the grocery list of disappointments from last night: DeSean Jackson’s fumbled punt return; Jackson and Michael Vick not only not being on the same page, but not even singing from the same hymn book; Vick’s propensity to have his passes tipped at the line; Vick’s propensity to throw low-trajectory ropes into triple coverage; Vick’s tendency to serve as a tackling dummy for Julius Peppers and Israel Idonije; Vick’s turnovers, which is becoming a real problem for Vick and my blood pressure, even if the problem’s root is buried somewhere underneath the feet of offensive coordinator/assistant head coach Marty Mornhinweg, whom Jon Gruden called an aggressive play-caller Monday night, despite the Eagles largely ignoring their bread-and-butter deep ball in favor of attempting to screen pass the well-drilled and organized Bears defense into hibernation.

That didn’t work. Nothing worked. That’s why Andy Reid was turning purple; the perfect color for this season.

You turn purple because your vaunted wide receivers are regularly dropping passes, because you’ve abandoned the run in the second half despite being only down seven points, because your cornerbacks are about as into tackling as Woody Allen is into cocaine, because your one-time Pro Bowl cornerback is screaming at your first-time defensive coordinator on the sideline and because, since you are Andy Reid, your season, which was supposed to be dictated by demigods like Vick, Jackson, Cullen Jenkins and Nnamdi Asomugha, was seemingly decided by an undrafted punter who couldn’t throw a ball 10 yards.

Chas Henry’s botched play was perfect metaphor for this botched Eagles season. It was a good idea in theory, but in hindsight, seems woefully misguided.

Previously By Chris Ryan:
Is This the Greatest Dodgeball Move of All Time?
Must Watch: Awesome German Football Crowd Choreography
Rankonia: The Triangle Power Rankings
The Reducer: Week 10, Happiness Is a Warm Gun
So, Detroit, What Do You Think of Tim Tebow Now?