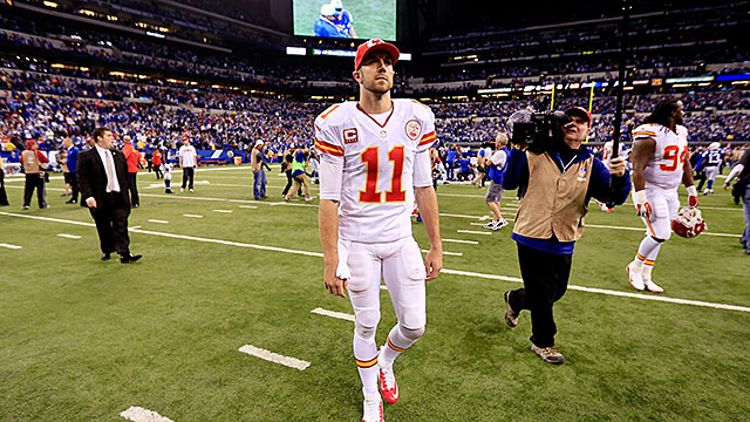 Sure, there were other ominous factors that were ignored at the time — that the usual sports bar viewing location was compromised; the hollow, concussed look on Jamaal Charles’s visage when the trainer shone his doctor-issue Maglite into Charles’s eyes; that the new viewing location was still festooned with dreaded Mizzou Tigers swag from the previous night’s Cotton Bowl party. But the pants: They haunt me. Those pants!

You see, the Chiefs don’t go all-white much. Want to know one time they did, though? A 2006 blowout at the hands of the Colts, debunking a touted Larry Johnson vs. Peyton Manning showdown, or as I like to call it, “Larry Johnson up the middle, no gain.” Another Colts-Chiefs playoff game stands out in my mind because I was in the stands: That time, Dick Vermeil’s prohibitively offense-minded Chiefs lost in the famous “no punts” barn burner at Arrowhead. My friend Corey’s uncle, who had taken us to the game, threw up Bloody Marys in the parking lot before driving us home. This is how football season ends in Kansas City.

My friends and I got far enough during this game, mentally and emotionally, to figure out that we needed to root for San Diego so Kansas City could avert the Broncos, who fricasseed Chiefs corner Marcus Cooper so thoroughly during Week 13 that it’s going to take him 10 Pro Bowls to get his confidence back. But, at that point, when the score was 38-10 thanks to a Smith–Knile Davis connection, I’ll admit to basking in the beatdown like I wasn’t acting out the football version of Groundhog Day.

It’s funny that Andrew Luck has his “Andrew the Giant” nickname, because the rest of the game from that point seemed as scripted as any professional wrestling pay-per-view. Luck went to T.Y. Hilton so often that Hilton now has a prominent entry in The Kansas City Chiefs: Glossary of Sadness between Elliott, Lin and Rich Gannon Benching, The. (Interesting fact: Hilton ended up with 357 catches for 6,140 yards on the night.) For a season when all the bounces fell right into the Chiefs’ lap — and usually in their lap with space downfield — Luck’s fumble recovery touchdown reverses an entire season of cosmic progress. That touchdown, god, that football Rube Goldberg machine of a play. Even though the score was at that point Chiefs 41, Colts 38, a member of our group leaned over and groused, “It’s over.” He was right.

The end of the game, for those familiar to the Kansas City Chiefs brand, was no less than perfect. Though big plays happened to a degree that seemed to bless the Chiefs — let’s just say this season has not been filled with many skyscraping, 79-yard Alex Smith strikes — the bodies kept accruing on the sideline. First Charles, then Justin Houston, then Brandon Flowers, then Davis. (Finally, my heavy Cyrus Gray Fantex investment paid off, and big!) Hilton, because he is a selfish man and thus wants to shape history in his likeness, broke through the safeties for a deep score, the field in front of him as cleared out as Oklahoma Joe’s on Sundays. The rest is history: Second Biggest Playoff Comeback in NFL History and Most Consecutive Playoff Losses in Playoff History (eight, dating back to 1994; four of those to the Colts). “We didn’t get it done,” Andy Reid said, achieving the polar opposite of this GIF.

One moment I’ll remember for a long time. Sitting in the sports bar that I didn’t pick, the Chiefs were rolling, 24-7. I looked at the game clock and read 12:39 in the second quarter, thinking, Jesus, this game hasn’t even started. Shortly thereafter, the season was over.