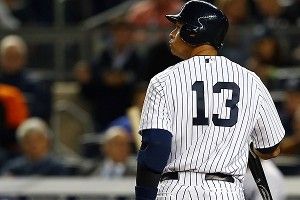 So, turns out when you write about the 15 least tradable contracts in baseball, people tend to get fired up about it, almost as much as when you tackle the 50 best ones.

With that in mind, time for a mailbag! In Part 1 today, we’ll cover a couple of questions about the most polarizing player on the list with an all A-Rod ’bag. In Part 2 Wednesday, we’ll cover other worst-contract questions, and other topics.

What do you think A-Rod could get as a free-agent contract? At some level, he might be better off offering the Yankees a buy-out of his existing contract, and taking whatever he could get in free agency. Relationship is not going well, fans hate him, NY is not a great place for him to play – and most importantly (from his perspective), he might be better off financially (depending on your view of the numbers).

Do you think that has crossed either his, or the Yankees’, minds?
— Matthew Paster

It’s an interesting game of chicken from the Yankees’ perspective. I’ve dismissed a buyout as impossible, because A-Rod would seem to have no incentive to accept anything less than the $117 million the Yankees owe him in salary plus the remainder of his signing bonus. But that’s narrow-minded thinking. There might very well be some number at which Rodriguez decides that the pressures of playing in New York — or playing, period — are too much, and he takes it. Of course, it may well be that A-Rod has a thick skin, that he loves being a Yankee, and that he’s champing at the bit to get back on the field, steroids taunts and media scrutiny be damned. Meanwhile, no matter how many headaches A-Rod might cause for the Yankees (I’d argue far fewer than what the media likes to think), the team’s not going to offer, say $116 million for a buyout, then be happy they’re rid of the guy. It would have to be a number that would allow the Yankees to clear roster space, save a significant amount of money, and still guard against the possibility that they’re ditching a player who’s got some production left in his bat.

That’s where his potential free-agent value comes in. If the Yankees offer, say, a $77 million buyout, it would in a sense argue that A-Rod’s worth less than $40 million on the open market, or at least that saving the $40 million is enough of a benefit from a PR standpoint to not sweat whatever he does next. At this point in Rodriguez’s career, given his age and injuries, he’s probably a net negative defensively at any position. So what would a team pay for A-Rod to be a full-time DH, given his age, health risks, and the PR blowback that could ensue, weighed against his offensive potential, and possible attendance and revenue boosts related to home-run milestones and other factors?

I polled various front-office and baseball-ops types for answers — under the condition of anonymity. The question as posed included preamble about A-Rod’s various potential positives and negatives, with the kicker as follows: If A-Rod became a free agent tomorrow, what would you offer him, in years and dollars?

Here’s what they said:

I just have no reason to think he’s healthy, so nothing. That said, if he took a year off, got healthy and then started sniffing around for a gig, I’d be very interested in at least taking a look at him. I know it’s fun to talk about all the PR stuff, but in the end, you just want good players, and we’re always looking for change of scenery guys. A healthy A-Rod on a one-year deal (beginning in 2014), could be just that. You’d have to be very careful on the health, and no way I’d go multi.

It would be as a DH only. I don’t know enough about his medical condition to know how much it affected his poor play at [3B] last year, but his hip isn’t getting much better and he’s not getting younger, so I’m guessing it’s not a good long term outlook on his defense. As a DH, I’d be willing to give him 2 x 10. Paying him into his age 40 year doesn’t sound all that appetizing.

With the current health stuff on A-Rod? Probably about 1y/$6M because it sounds like he’s only going to play half a year in 2013. If he was supposed to be healthy I see him with a contract between Youkilis/Berkman and Hunter/Beltran. I think he’s worth around $13M a year and wouldn’t go more than two years. So I’d consider him for 2 years and $18M total as well as 1/$6M for the half year.

I think the non-baseball stuff is a net negative with A-Rod.

In terms of A-Rod, even if we had a need at DH or 3B, we would not pursue him. We would offer nothing. His age, limitations, and makeup are all major negatives and overcome any benefit he could provide to our club. We would be better off going with somebody internally.

So … yeah. If A-Rod isn’t bothered by his current situation and everything comes down to financials, the Yankees would probably have to offer something close to $100 million to make a buyout possible. Which isn’t happening. Which means he’s not going anywhere, at least not right now.

Read your article on worst contracts. How do you think the A-Rod deal affects the Yankees’ thinking on Cano, if at all?
— @Anton_Zitz

This is one of the most intriguing off-field plot lines to watch between now and the World Series. Let’s start by pointing to Jayson Stark’s excellent 2012 primer on baseball’s luxury tax — be sure to read the whole thing. The shorter version of that piece is this: If the Yankees can get under the $189 million luxury-tax number in 2014, they’ll end their streak of going over and trigger a reset clause that would put $40 million or more per year directly into the Steinbrenners’ pockets. This Maury Brown article intimates that $40 million might be a conservative estimate. Not only would the Yankees pocket a bunch of cash just by getting under the tax, they would also see significant cash savings by way of paying less in revenue-sharing than they’d otherwise have to. Add the actual difference between $188.9 million and whatever figure the Yankees might spend if they were making an all-out run at the World Series, money be damned, and the savings could be enormous.

Now consider the Cano situation. So many teams — even mid- and small-market teams — are aggressively locking up star players that, by the time you get to free agency, the pickings are slim. If no one as good as Cano’s likely to be available on the open market next offseason, and if you have a season-long window to sign Cano himself, and if your organization could probably turn a profit even if you carried a $350 million payroll given your gigantic revenue streams, then why the hell not give Cano $200 million and move on?

Ultimately, this will come down to three factors: how rigid the Yankees want to be about the luxury tax, how badly they want to contend next year, and how creative their accountants can be if the answers to the first two questions are, “very” and “very.” According to Cot’s, the Yankees only have $81.6 million in salaries committed for 2014. But that figure only locks in the rights to four players, A-Rod, Mark Teixeira, CC Sabathia, and Ichiro, with the very real possibility that A-Rod offers little to no production for his $26 million. That leaves seven arbitration-eligible players, plus a hell of a lot of work and a hell of a lot of money (if the Yankees fancy themselves contenders) required to fill out the rest of the roster. Maybe the Yankees can persuade Cano to accept a heavily back-loaded deal, or even one that grants the team a big 2014 discount in exchange for Bobby Bonilla–like short-sighted payments until Cano’s grandkid’s hitting cleanup for the expansion BC Buds.

But if Cano insists on something like $25 million in 2014 as part of a long-term deal, and the Yankees won’t budge off their under-the-tax goal, then there’s a very real possibility that the team will be fighting for third place in the AL East in 2014. Given the team’s inactivity this offseason, along with the age and injury concerns of the current roster, that could be a third-place run for the second straight season.