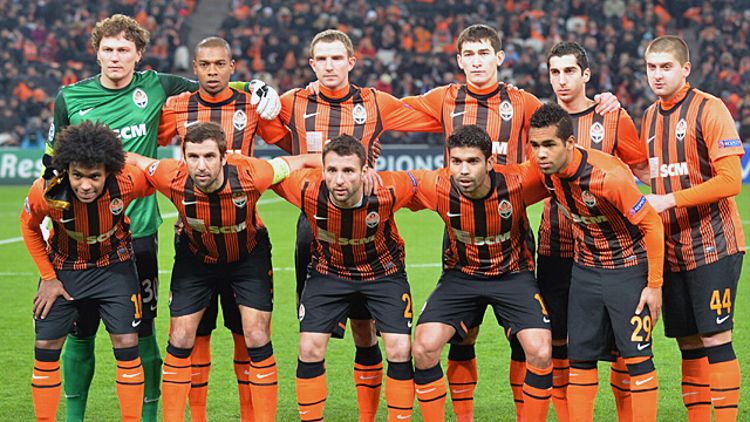 If you’re watching soccer on Wednesday, assuming you live outside of Donetsk and North Rhine-Westphalia (and if you are reading from one of those places, Pryvit or Guten Tag), you’re going to be watching Real Madrid play Manchester United. I get it. I really do. Ronaldo, van Persie, Rooney, Ferguson, “the Special One.” In terms of individual quality, history, and story lines, there’s nothing better than a Champions League clash between Madrid and United. But the best match of the day will be played in Donetsk, Ukraine, between reigning German double-winners Borussia Dortmund and reigning Ukrainian double-winners (and your Champions League Underdog of the Week), Shakhtar Donetsk.

What is Shakhtar even doing here? The simplest answer is “getting about as far one might expect.” More specifically, the reigning Ukrainian champions and current runaway UPL leaders emerged from what was an effective three-way battle for two spots out of Group E, with Serie A champions Juventus, and Champions League trophy holders Chelsea (sorry, FC Nordsjaelland). While Juventus secured their spot at the top of the group after their 1-0 win over Shakhtar in the final match of the group stage, the Ukrainians still advanced over Chelsea by virtue of a head-to-head tiebreaker, dooming the Blues to their current state of Rafa Benitez–fueled tumult.

Why is Shakhtar an underdog? Well, based on the numbers, they aren’t. The Dortmund-Shakhtar matchup is among the most even in the round of 16. On most European betting sites, Shakhtar is a very slight favorite in the home leg (though a slight underdog to advance). Dortmund is coming off of an embarrassing 4-1 home loss to Hamburg (though that was mostly due to Son Heung-Min doing Son Heung-Min type things, and a mind-boggling Robert Lewandowski red card that won’t affect his status in European play), they’re missing key midfielder Kevin Grosskreutz, and they’re playing in Ukraine in February. Also, insert Seinfeld reference here.

However, a number of factors are working against the Ukrainians. They’re coming off of the Ukrainian Premier League winter break. That means they face the reigning German champions after a three-month layoff. Although they played a number of competitive friendlies against the likes of Zenit and CSKA Moscow, match fitness is a question. Also, they just lost the last of those friendlies to Odd Grenland (who apparently are a mid-table Norwegian side, making them the Utah Jazz of European soccer), in a match I can only assume was heavily bet on by a Singaporean crime syndicate. Sides from Germany’s Bundesliga have been nearly unbeatable in this Champions League campaign, with Schalke 04, Bayern Munich, and Dortmund all winning their groups. Additionally, the cold weather advantage Shakhtar might get against some opponents won’t be particularly pronounced against Dortmund (high of 37 on Wednesday in Donetsk, high of 41 in Dortmund).

Finally, and most importantly, Donetsk sold their most creative player, Brazilian playmaker Willian, to Anzhi Makhachkala (because when you have the chance to go to Dagestan and play in the Europa League, you don’t pass that up) for €35million, much to the chagrin of Chelsea, who was reportedly in the market for the midfielder’s services. Willian had been a critical cog in the Donetsk attack since ’07, and he will not be easy to replace. Donetsk did add another creative Brazilian midfielder while screwing Chelsea again (what could a Ukrainian team have against a team owned by a Russian oligarch?) by outbidding the London club to secure Taison’s services from Metalist Kharkiv (owners of the best team name and the worst fanbase in Ukraine), but whether he’ll be able to slot in right away and make an impact is yet to be seen.

How does Shakhtar play? A lot like their German opponents, using a 4-2-3-1, with Brazilian striker Luiz Adriano up top. Behind him, in a bank of three, are “the Maestro” Henrikh Mkhitaryan (his friends probably just call him Henry), Alex Teixeira, and the newly acquired Taison in the spot Willian had been holding down. They’ll gain additional attacking impetus from Croatian national treasure Darijo Srna, who’s effective getting forward from the fullback position. Dortmund plays a similar shape with their prolific German and Polish (Germolish?) attacking quartet of Lewandowski, Mario Gotze, Marco Reus, and Jakub ‘Kuba’ Błaszczykowski. If all goes according to plan, there will be a great deal of fluent attacking play up front for both sides. However, with Grosskreutz out and deep-lying midfielder Ilkay Gundogan a question mark, Dortmund manager Jurgen Klopp might leave Gotze playing a little deeper, which could deaden the box-to-box excitement this match promises.

So who’s the man to watch for Shakhtar? With Willian gone, Shakhtar’s creative spark will come from their leading scorer, Mkhitaryan. The “Armenian Messi” (because every country needs a player dogged by an unfair comparison to Messi), Mkhitaryan has proved himself a world-class talent at 24. He bossed the Italian defense while playing for an otherwise poor Armenian side in World Cup qualifying, and already sits just one goal off the career record for Armenian National Team goal scoring (with 10, but still). Donetsk’s free-flowing style has given him the freedom to establish himself as the likely Player of the Year in the Ukrainian league. He’s already moved from being baselessly connected with a transfer to Liverpool, to being baselessly connected with a transfer to Bayern Munich or Juventus, so expect Anzhi to buy him out from under Chelsea this summer for the GDP of his home country of Armenia. Again, never turn down a chance to move to Dagestan.

What is a likely result? 2-1 to Donetsk … maybe 2-2 or even 3-2? Donetsk needs to net some goals before heading back to Dortmund and their imposing Westfalenstadion. While I think they’ll succeed, I also suspect that an open match will give Dortmund the chance to poach a key road goal or two. This would be the tie to watch this round if it were up against anything other than the Madrid/United clash, and it will likely prove to be the tie you DVR and maybe flip to during the delay when Paul Scholes does something horrible to Xabi Alonso.