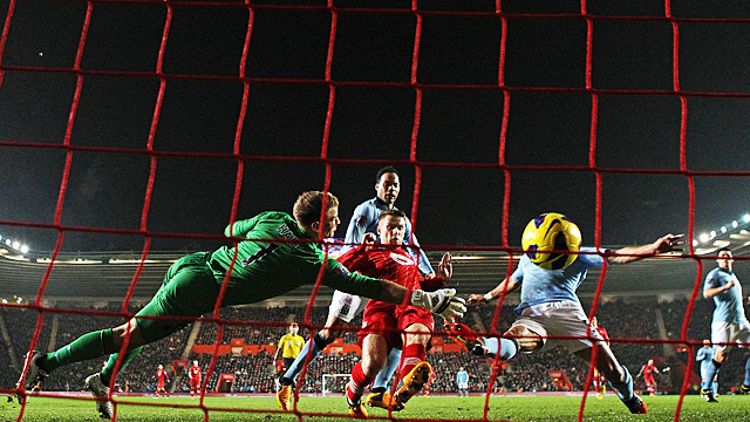 It says a lot about this season of the Premier League when the goal that may very well have delivered the title to Manchester United (it’s February, mind you), was followed by a celebration in which the goal-scorer pretended to wipe his own ass. It’s a bittersweet symphony, this life.

Here’s a version of the goal with said celebration.

That’s Southampton’s Jason Puncheon. In fairness to him, he had a great game, helping his struggling Saints team get their first victory under new manager Mauricio Pochettino. If you had just put your team ahead against Manchester City, the defending champions, you might do something pretty crazy, too. And to be even more fair, Puncheon’s act was actually a joke between him and the Southampton fans: During a match against Everton in late January, Puncheon left the field during the second half, because … well, use your imagination. This prompted Saints fans to serenade him with the song, “Jason Puncheon, he just took a shit.”

You would never have known watching the match that Southampton was in the relegation zone, coping with the departure of an incredibly popular manager (Nigel Adkins) and the arrival of a largely unknown one (at least in England). It was, in almost every facet of the game, a superior team. City retained 56 percent of the possession, but it felt like the Saints could take the ball off them whenever they wanted to, with the former Espanyol manager Pochettino installing a furious pressing scheme that disrupted a drowsy looking City side.

After the match, Roberto Mancini did Roberto Mancini things. He questioned the size of his “balls” and all but conceded the title to their intracity rivals, something he did a fair amount of last season. And we all know how that ended up. This time is different, though. City have 10 fewer points and 19 fewer goals than they did at this point last season. And for as telling as those numbers are, they barely hint at the disillusioned state the defending champions are in. There are rumors that Samir Nasri is being recruited to go play in Monaco, that David Silva — possibly experiencing his worst run of games in a City shirt — is heading to Real Madrid, that Borussia Dortmund is making eyes at Edin Džeko, and that Carlos Tévez missed the Southampton game because of unexplained “personal problems.” City’s players are picking the worst possible time to go into a funk, and they are being managed by a man seemingly incapable of motivating them to get out of it.

After their historically bad Champions League run, Mancini would need to make a historic run at the Premier League to save his job. And even then, I wonder whether City’s new director of football, former Barcelona sporting director Txiki Begiristain, would give him another shot. Over the last two transfer windows, City have more or less stood pat, while their rivals sought to improve themselves. City don’t need new players as much as they need different ones, but given the outrageous weekly wages being paid to most on their roster — even to bit performers — it will be hard to find takers for a majority of them. When you pay like City you can pretty much only sell to PSG, Chelsea, Real Madrid, or Barcelona.

One player who City was able to find a buyer for was Mario Balotelli. The controversial striker wasn’t exactly setting the world on fire (except when he was trying to set the world on fire), but his exit now feels decidedly political; a move designed to depict Mancini as powerless off the field. The way his team played Saturday, he didn’t look particularly powerful on the field either.

Gareth Bale has four goals in his last three games, bringing his tally to 13 in the Premier League this season. He is playing the best football of his career and has Tottenham not only looking at Champions League qualification, but possibly third or second. Seriously: Are you telling me that Chelsea or City are playing that much better than Spurs? Bale’s goal-scoring has filled a gaping need for Spurs. After a deadline-day bid for Brazilian striker Leandro Damião failed (because, in classic Tottenham style, it waited until the very last minute to make the offer), and Spurs have been short up front, with only Jermain Defoe to count on (Emmanuel Adebayor only returned from international duty with Togo for the match on Saturday and he played like a guy who had just gotten off a long plane ride). Now Defoe is injured, putting even more pressure on the likes of Clint Dempsey and the aforementioned Bale.

Bale, a former left-back, moved to left-wing and played in the middle of an attacking-midfield three against West Brom. He had 90 touches, a 93 percent pass success rate, and scored the game-winner. Against Newcastle on Saturday, he started on the left and had a nice first half, but looked way more dangerous when he moved in behind Adebayor in the middle, scoring the decisive goal in the 78th minute.

With his pace, the wing is the logical place for Bale to play, but when you see his touches, passes, and shots tick up when he plays in a central role, you start to wonder whether he should be permanently installed in a kind of off-the-striker role. This is the same question many asked about Ronaldo: Where should he play? I’m starting to agree with Spurs legend David Ginola: “This is the kind of player who should be able to be anywhere where the ball is because he can do anything with it.”

I think Wigan are going down this season. Harry Redknapp is certainly counting on it. If they do, I will miss the Scottish Messi, Shaun Maloney.

That is a ridiculous through-ball. By way of an exit, here’s a question for you: Does the fact that United are going to walk away with the Premier League make their performance in the Champions League that much more important? This is a weak Premier League. I think most people who have watched it will agree. To cement themselves as a great team, which is what Sir Alex Ferguson has been insisting they are, doesn’t United have to get to a European final? They certainly can’t claim that they’re being distracted by a domestic title scrap.