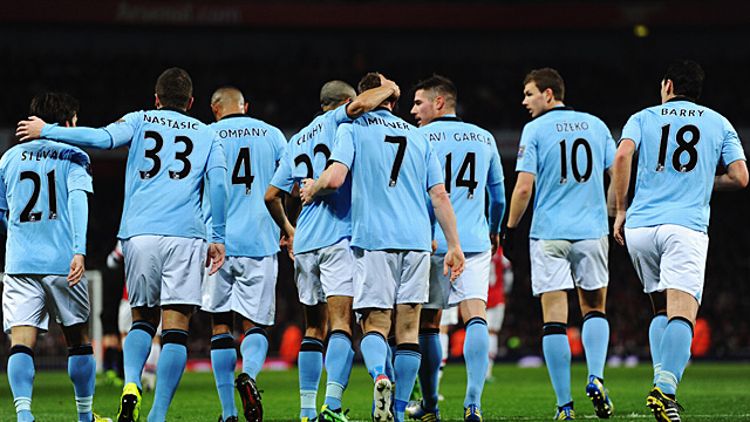 This match had me thinking about money. The £62 Arsenal charged visiting City fans to visit their (more or less) £400 million stadium. The approximately £70 million spent by City to Arsenal for players like Emmanuel Adebayor, Samir Nasri, Kolo Touré, and Gaël Clichy. I thought about what the Premier League table would look like if Robin van Persie had gone to Manchester City instead of Manchester United. I thought about the letter, written on Arsenal letterhead, sent to the Premier League from Arsenal, Tottenham, Liverpool, and Manchester United, demanding more stringent financial regulation in the free-spending top flight of English football — a salvo against the seemingly unlimited investment pouring into Chelsea and City. I thought about the rumor that bottom-dwelling QPR were going to pay Marseille striker Loïc Remy £96 thousand a week to help them out of their relegation battle, while Arsenal haggled with Theo Walcott over whether the England international should be making £90 thousand, and wondered how in the world Arsene Wenger was going to keep even this sub-par group of Gunners together. It was quite an interior monologue, honestly.

Then James Milner scored the most Milner-ian of goals in a moment of truly classic Arsenal comedy defending. And I immediately thought about the one thing that has been nagging me over the last couple of seasons with Arsenal. You have to wonder, when you see something like that happen, whether these matches aren’t being lost in the transfer market or in the lobby of the Savoy, negotiating new contracts with longtime players, but rather on the training ground.

When the season began, Arsenal kept three clean sheets in their first three games. This was largely credited to former Gunner Steve Bould, who had moved over from coaching the club’s youth team to the seat next to Wenger on the Arsenal bench, a spot previously occupied by the long-serving Pat Rice. It was assumed that Bould was taking a hands-on approach to developing the usually drowsy Arsenal back-four.

Since then, as Arsenal’s form has dipped, dived, leveled out, and dipped again, there have been still more rumors that Wenger and his right-hand man do not see eye to eye on how to coach the team, and that the veteran manager had been preventing Bould from taking a more hands-on approach during training sessions.

I can’t claim to know what does and doesn’t happen at London Colney, but to me, for the last several seasons, Arsenal have been equally marred by their tactical predictability going forward and their lack of cohesion in the back, just as much as they have been by the juiced-up spending of clubs like Manchester City and Chelsea (and United).

Incidentally, starting a match with Javi Garcia, Milner, and Gareth Barry in your midfield is kind of like buying a palatial mansion and then building three dry storage cellars in it.

Not to really stare deep into your eyes and whisper terrifying Bible quotations while twisting the knife, Arsenal fans, but will you look at Robin van Persie? It’s a testament to just how colossal the Dutch striker has been this season that I didn’t blink twice when it was announced that Wayne Rooney would miss the Northwestern derby with Liverpool. If anything, I thought the first half was one of the most impressive 45 minutes I had seen the league leaders play all season.

Aside from the fact that this is the perfect goal, taken from the perfect position, by the world’s most devastating striker not named Falcao, I think it’s worth mentioning that this, United’s first in a match they would win, 2-1, is exactly the kind of goal that Liverpool manager Brendan Rodgers dreams about when he falls asleep in his recliner at night, reading The Upside of the Downturn: Ten Management Strategies to Prevail in the Recession and Thrive in the Aftermath. A one-two between a midfielder and a forward, fullbacks involved, attacking wingers threatening wide and cutting in, and a clinical finish. That’s a team goal, something that I think matters more to Rodgers than any of the one-man band symphonies played by Luis Suárez. Shiny new toy Daniel Sturridge started this game on the bench, coming on and scoring in the second half, and almost immediately made a difference, scoring in the 57th minute. His goal came from a bit of janitor work, sweeping up after Suárez and Steven Gerrard both did the head-down-doing-it-on-my-own thing, rather than looking up and playing the team passing game that Rodgers craves. It will be interesting to watch Liverpool over the next few weeks to see if Rodgers sticks to his promises of playing Sturridge up the middle, with Suárez on the flank. On one hand, it might result in the football he wants to see, but it will likely isolate the Uruguayan goal-machine a bit. I don’t know that that’s such a bad thing, though.

They can buy Demba Ba, flirt with Falcao, take Neymar to all the fancy dinners he wants, and even keep a light on for the ghost of Fernando Torres. As long as Chelsea keeps playing its dueling diminutive wizards, Juan Mata and Eden Hazard, in attacking midfield roles, they’ll be just fine.

“I don’t really care what Chelsea are doing at the moment,” is one of the most exciting things I’ve heard from a player this season. The quote comes from West Brom’s Romelu Lukaku, a Belgian striker, on loan from the Blues. The Baggies lost a heartbreaker to Reading, who’ve already started playing the jailbreak kind of football you need to produce if you want to get out of a relegation fight. Lukaku scored two wonderful goals, and both of which (seen above) were the product of Reading pouring forward and leaving holes in the back. The Royals needed the three points, and Lukaku preyed on that desire, filling in the spaces left by Reading’s high-line.

Reading would score an extraordinary three goals in eight minutes to win the match, giving them their second victory in three matches, and some possible daylight to claw toward. But the most extraordinary thing I saw during the match was Lukaku’s performance. Thank god he’s not buried somewhere on Chelsea’s bench.

Is Sebastian Larsson the most feast-or-famine player in European football? I swear, you can watch three or four matches in a row and not know he’s even on the field. He’s not that decent of a passer, he’s pretty useless on defense, and nobody’s writing Romantic poetry about his movement off the ball. But every season, without fail, Larsson pulls of something like this; a moment of coffee-table-flipping beauty that sends the crowd into hysterics.

For No Reason Whatsoever, Here's a Video of the 1988 Arizona Wildcats Rapping