That Was a Goal: The Premier League Holiday Season in Five Goals 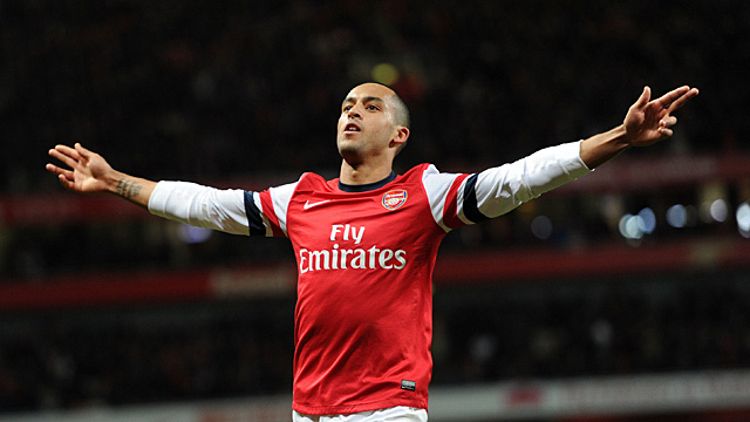 The story of the Premier League over the holiday season, told in five goals. Get some.

All happy Arsenal players are the same. All unhappy Arsenal players are unhappy in their own way. Over the years, players have left the North London club due to matters pertaining to the head (Robin van Persie knew he needed to leave the Emirates to win trophies), the heart (Cesc Fábregas ultimately wanted to return to his boyhood club, Barcelona), and the wallet (Samir Nasri makes more as a bit player for Manchester City than as the focal point of Arsenal). The club’s latest contract fiasco is interesting, though. It’s about identity, both of the player, Theo Walcott (and how he perceives himself), and of the club itself.

Walcott has only a few months left on his current deal. Reports suggest that the 23-year-old England international wants to be paid £90,000 a week. That’s a little bit more than Arsenal midfielder Jack Wilshire’s new deal, pretty much the same as so-so forward Lukas Podolski, and probably a little less than some Hungarian central defender on Manchester City you’ve never heard of who spends most of his time fetching dead birds that Mario Balotelli shoots when he decides to go quail hunting during training (just because this has never been witnessed or reported doesn’t mean it doesn’t happen).

Arsenal have a strict wage cap, one that is, for the most part, self-imposed. One of the richest clubs in Europe, Arsenal could certainly afford to pay Walcott more than what he is asking for, but it doesn’t fit in with manager Arsene Wenger’s fiscal model. That’s fine, and perhaps, with financial fair play on the horizon, Wenger’s prudence will prove warranted. But regardless of economic realities facing the game in the near future, this is the reality of the present day: Arsenal cannot be considered a major club if they can’t keep their best players. And nobody is playing better football for Arsenal right now than Theo Walcott.

The most compelling wrinkle to Walcott’s contract drama has been the reported demand, on the part of the player, that he be moved to his desired center forward position. As fast wingers go, there are possibly none quicker than Walcott. Laser-guided crosses? Not so much. Expert overlap interplay with Bacary Sagna or Carl Jenkinson? Nothing you’d write home about. Cutting in from the flank like Cristiano Ronaldo? Baby steps. No, Walcott is on the wing because he is fast. There has always been some talk from Wenger that Walcott was serving some kind of apprenticeship on the flank, much like the man who wore the no. 14 jersey before him, Thierry Henry. But if ever there was a time to move Walcott up front, these post–van Persie days would seem to be it.

Walcott didn’t start a league game until November 10, an exile rumored to be related to his contract situation. But since then, he’s featured heavily for the Gunners and often played as a central striker. He now has 14 goals this season, eight in the Premier League, three of which came against Newcastle, one of which (his third), was my favorite goal of the season.

He is not exactly a tractor beam, with his first touch often resulting in the ball careening off his feet. And he’s not exactly winning a lot of aerial duels. But he’s still a road runner, road runner, and he’s an underrated finisher. And there aren’t more than a half-dozen human beings alive who could have scored his third goal against the Magpies.

Speaking of identity, Rafa Benitez’s influence on Chelsea’s is starting to reveal itself. And it’s a lot more playful than anyone could have imagined from a man who once did this:

Sure, he’s overseen Chelsea’s exit from the Champions League, as well as their loss in the Club World Cup final. But he’s won his last four games in the league, and has Chelsea seven points behind second-place Manchester City, with two games in hand. He’s also got them playing nice football, maximizing the deep squad he has available to him, and bringing about a mild Fernando Torres renaissance. One of his more interesting moves has been turning David Luiz from comedy defender into a very serious defensive midfielder. OK, I mean … that hair … serious is relative. But when he drills free kicks like this … NOBODY IS LAUGHING.

Leaving aside the fact that Fulham might find themselves in a relegation battle, this might be the best goal celebration I’ve seen in the past few seasons.

Bale’s hat trick against Aston Villa should probably only count as a goal and a half. Because it was against Aston Villa. After looking really handy against Liverpool on December 15, Paul Lambert’s young team had the worst Christmas since Joe Pesci and Daniel Stern tried to rob Macaulay Culkin, ending the year by losing three, giving up 15, and scoring zero (they drew with Swansea, 2-2, on New Year’s Day).

Tottenham, on the other hand, looked very good during the holidays, albeit against three relegation form teams (Sunderland, Villa, and Reading). Their match against Villa must be highlighted; it was perhaps their best performance under Andre Villas-Boas, and possibly added another £5 million to Gareth Bale’s eventual transfer fee. But it should be noted that against Reading, without Bale (who was suspended for too many Louganises), Tottenham is a better-rounded team, with a huge performance from Aaron Lennon, and a goal from Clint Dempsey.

Spurs definitely need some striking help in the January window (preferably before their January 20 match with Manchester United), but with or without Bale, they should be in or around the top four come spring.

This was Demba Ba’s last goal in a Newcastle shirt, but the reason I’m highlighting it is because of Sylvain Marveaux’s outside-of-the-foot assist for Ba’s volley. It was a heartbreaking holiday for the Magpies, who lost a tight match with Manchester United (though had they won, Sir Alex Ferguson might have turned into a tartan-tinted dust storm of pure Scottish rage), and went punch-for-punch with Arsenal until a comical last 20 minutes turned the match with the Gunners into a blowout. They’re facing the likely sale of Ba, are still trying to cope with the long-term absences of Yohan Cabaye and Hatem Ben Arfa due to medical reasons, and the disappearing scoring boots of Papiss Cisse. Last season, Newcastle were fighting to get into the Champions League. This season, they’re struggling to stay afloat in the top division.

JaVale McGee Is the Special Ingredient

Pink Slips Abound on Black Monday in the NFL