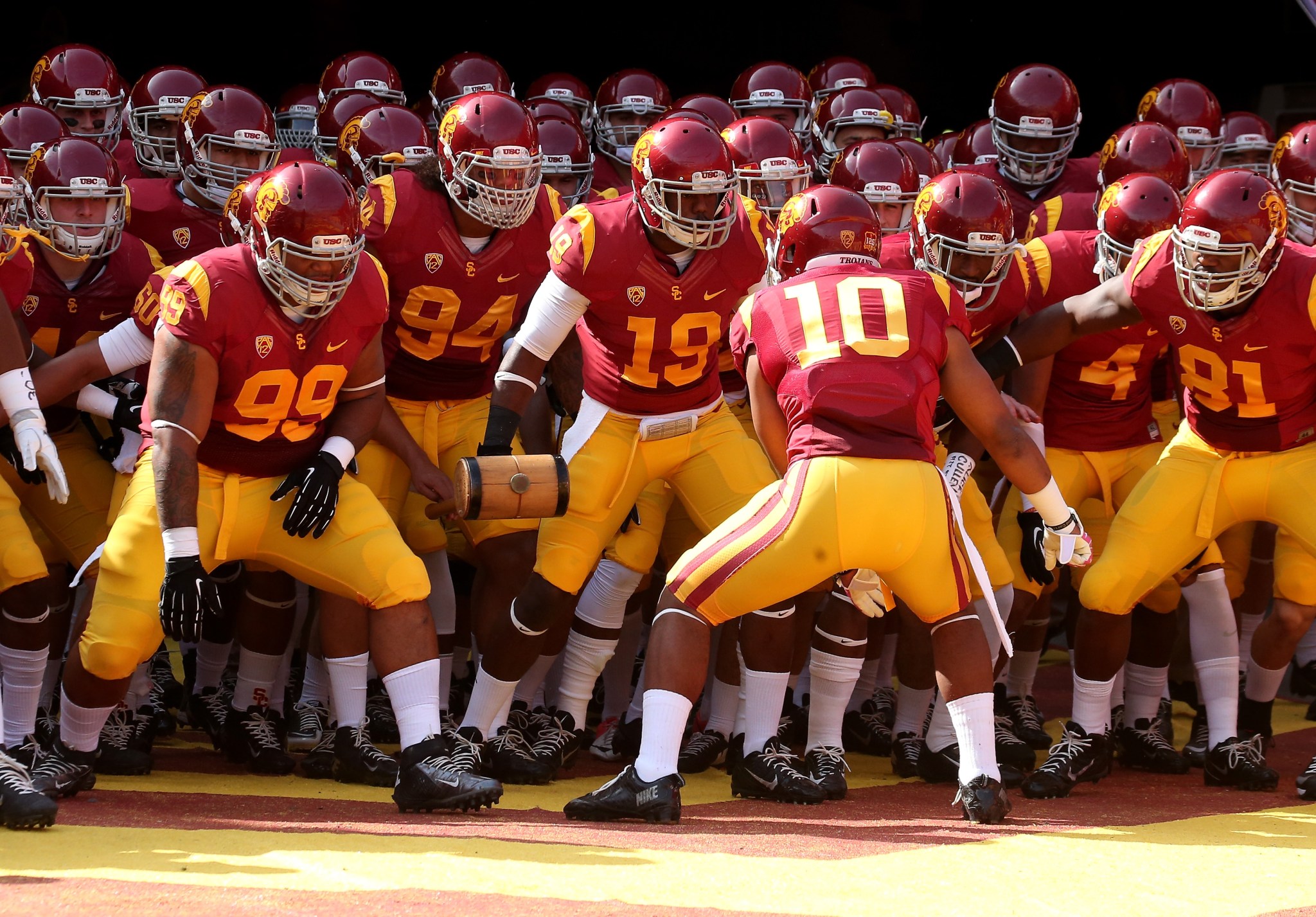 In the NCAA justice system, the people are represented by two separate, yet equally important groups: the college football reporters who investigate improper benefits, and the grumpy executives who prosecute the offending schools. This is the story of a USC student caught in the middle of a sanction-filled undergraduate experience …

In September 2006, Yahoo published an investigative piece alleging that USC running back Reggie Bush and his family took upward of $100,000 in exchange for pledging their loyalty to “New Era Sports & Entertainment.” The yet-to-be-formed agency wanted the Heisman Trophy winner to be its first client.

In May 2008, Outside the Lines landed an exclusive interview with Louis Johnson, a close confidant of USC basketball player O.J. Mayo. Johnson claimed that Mayo, like Bush, had accepted thousands of dollars in improper benefits. The NCAA took its time assessing the situation before laying down a boatload of sanctions — particularly on USC’s football team — in the form of a lengthy public infractions report that detailed bowl bans and scholarship reductions.

As a Texas transplant who arrived at USC in 2011, I had no idea what to expect from the athletics program. Several things became obvious pretty quickly: Pete Carroll, despite his abrupt departure in 2010, remained a legend on campus. Former basketball coach Tim Floyd was remembered less fondly.

Meanwhile, new athletic director Pat Haden was attempting to clean up the mess that had been left behind. After senior running back Marc Tyler was filmed by TMZ joking about USC players getting paid in July 2011, you could actually see a bat signal of Haden’s face projected above Los Angeles nightclubs whenever a drunk athlete was about to say something dumb/incriminating on camera. Couple all of this drama with a Bush censorship that completely erased him from the record books — including at USC’s Heritage Hall, where accused murderer and convicted armed robber O.J. Simpson still has his Heisman Trophy prominently displayed — and the sports junkie in me was anything but bored.

After stringing together an 8-5 record in 2010, USC’s football team ended up overshooting expectations during the 2011 season, finishing an impressive 10-2. Matt Barkley was dominant (a sentence you might not see again anytime soon) with 39 touchdowns and just seven interceptions, and the wide receiver tandem of Robert Woods and Marqise Lee was equally spectacular. I got caught up in the moment and stuck around to watch all three nail-biting overtimes of a 56-48 loss against Stanford at the Coliseum. Despite the defeat, I left the game with an inflated sense of pride for USC. Our college football Goliath had somehow turned into a David, and this was more fun than anyone expected.

Then the basketball season began. I was assigned to the Daily Trojan’s men’s basketball beat during the second semester of my freshman year, and was greeted to the woefully pessimistic world of head coach Kevin O’Neill. For the record, I thought O’Neill was awesome. During practices, his criticisms were the stuff of NSFW Comedy Central roasts: He’d stop scrimmages and drills to lay into a player for screwing up while simultaneously garnering the muffled laughter of other players and media members. What wasn’t funny was the losing hand he was dealt in the wake of Floyd and the sanctions that were left behind. At least Lane Kiffin inherited a talented group of starters — by his second season on the job, O’Neill’s best player was Maurice Jones, a 5-foot-7 shooting guard. When O’Neill was asked what would happen if Jones ever got hurt, his response was, “Don’t come to the games. It’ll be ugly. Don’t show up.”

As it turns out, Jones would finish no. 7 in the country in minutes played thanks to a devastating variety of injuries to other guys, and the Trojans put up their worst record in school history (6-26). O’Neill was right — no one should’ve gone to the games.

For the most part, they didn’t.

Still a few minutes until tipoff but at the moment USC's band is outnumbering the student section. pic.twitter.com/L5JLy7sA

I consoled myself — because USC is a football school, after all — and reveled in the fact that the Trojans were ranked as the AP football preseason no. 1 in 2012.  The optimism had started the year before: Although USC had no bowl game to fight for in 2011, it ended the year upsetting no. 3 Oregon on the road and demolishing crosstown rival UCLA 50-0.

This time around, the Trojans were bowl eligible, and a national championship appearance was back in the picture. The mood on campus was nothing short of jubilant. Barkley had turned into a legitimate celebrity after returning for his senior season; students gawked at him as he walked from one class to another like a scene out of a cheesy high school movie that played over and over again.

The blog Lost Angeles, which was started by a USC alum in response to the sanctions, grew in popularity and launched a new school nickname — “Arrogant Nation.” The moniker unfortunately further perpetuated the University of Spoiled Children stereotype. It also led to the creation of sorta funny T-shirts like “You Can’t Sanction the End Zone” and “Lane Fucking Kiffin, Bro.”

The Trojans started the season with an inspired 49-10 victory against Hawaii … and then proceeded to go 6-6 the rest of the way.

Rock bottom came when USC was stopped at the 1-yard line four times in a row against Notre Dame, all while countless students were wearing the aforementioned “You Can’t Sanction the End Zone” shirts in the stands. Also, “Lane Fucking Kiffin, Bro” had a much different connotation than it did before, especially when mumbled by drunk guys in fraternities as they emptied out of the Coliseum.

It’s easy to make fun of others who got caught up in the moment, but I was far from above the fray, titling a column I wrote for the school paper “Kiffin Is USC’s Most Valuable Prospect.” (I did not submit that clip when I applied for an internship at Grantland.)

The 2013-14 school year served as a further reality check. O’Neill was fired and replaced by Andy Enfield, who has so far underwhelmed. The word “Kiffin” was spray-painted on curbs next to “Fire Lane” warnings, spelling out his impending doom. Interim coaches came and went, and despite the “Coach OOOOOOOO” chants that would soon permeate the Coliseum, Ed Orgeron was also cast away.

Now I’m an incoming senior, and though the sanctions are technically over, new head football coach Steve Sarkisian only has 72 players on scholarship for this season. As many other Los Angeles–based writers have already extensively detailed, the Trojans aren’t going to be at full strength until they can fully replenish the roster. The football team will probably float around 10-4 like last year. The basketball team has a talented incoming class but will more than likely struggle, especially since leading scorer Byron Wesley bolted to Gonzaga.

For anyone who’s attended USC since 2010, the sanctions are almost like a badge of honor. We didn’t get the Rose Bowl appearances, the Heisman Trophy winners, or even Lil’ Romeo playing on a basketball scholarship. We got four torturous years of Kiffin, Orgeron, and one of the worst stretches of men’s basketball the school has ever seen. But we went through it as a student body, and the journey was pretty damn entertaining. And in the end, I still get to claim USC as my college when the football team inevitably reemerges as a legitimate national title contender. In the meantime, I can take solace in the fact that I went to school during perhaps the most bizarre sports period in its 134-year history.

That, and Nick Young is a proud Trojan alum. Tim Floyd or not, Swaggy P can never be struck from the USC history books. 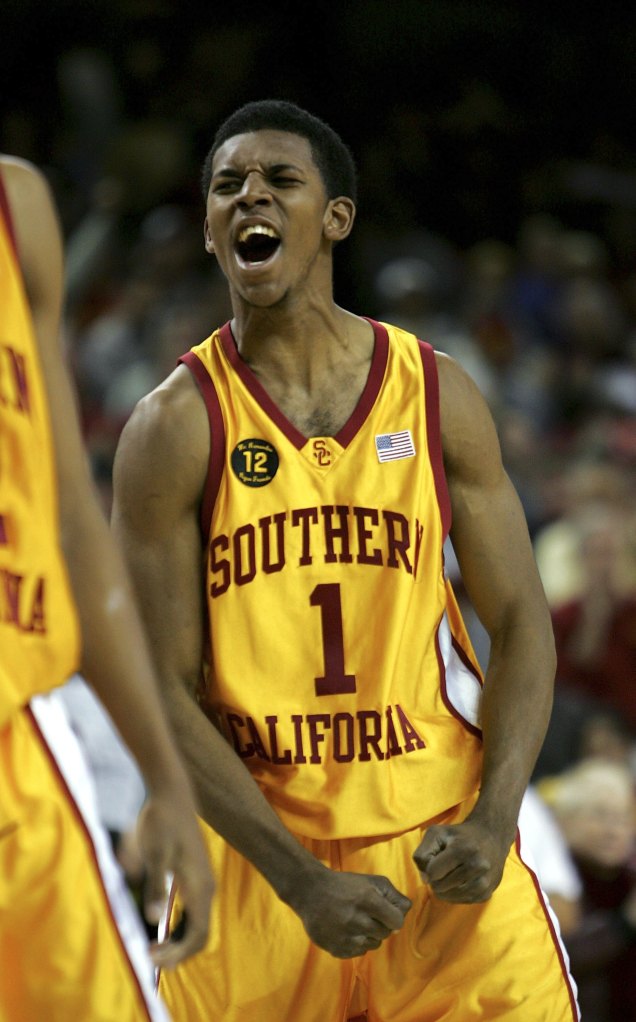