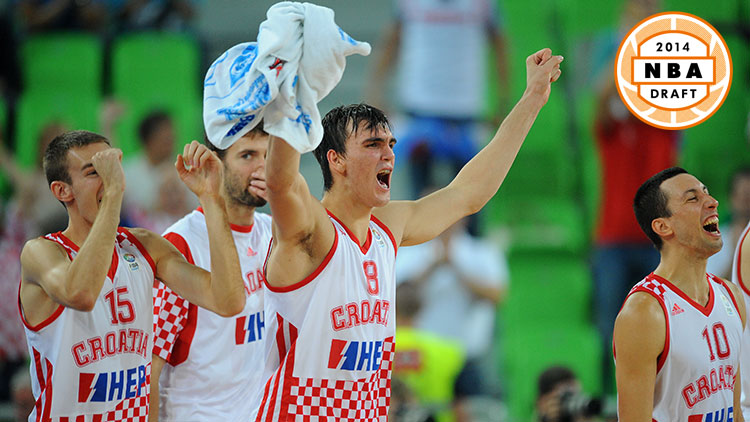 Who’s That Guy is an ongoing Grantland series and an orientation tool to use in the vast sports landscape. Today, a cheat sheet on Dario Saric, an NBA draft prospect our boss Bill Simmons has fallen madly for.

Who Is He? Dario Saric!

Where Is He From? Sibenik, Croatia

Why Does He Sound Familiar? Because you’ve been doing your homework. America had its first real look at Saric in 2011 at the Nike Hoop Summit. He made a second appearance a year later and was excellent, scoring 13 points, corralling 14 rebounds, and dishing out five assists. He was an early entrant in last year’s NBA draft, but withdrew his name to play in Europe for another year. Had he stayed in the draft, he would have been a lottery pick, and at the latest, would’ve been picked at 13 by the Dallas Mavericks, who had given him a promise.

Saric’s Game in 50 Words or Fewer: Arguably the most skilled player in the draft. True point forward who has made yearly improvements on his overall game. Not an athletic marvel, but plays hard and with a lot of passion. Has great instincts as a facilitator at 6-foot-10. Not a great shooter or defender, but getting better.

When Did He Turn Pro? In 2009, when he was 15. His first offer came from Spanish league team Saski Baskonia (referred to as TAU Ceramica in the past), where players like Goran Dragic, Tiago Splitter, Luis Scola, and Jose Calderon cut their teeth. Saric has been scouted by professional European clubs since he was 11, if that makes you feel any better about your own sick addiction to watching YouTube mixtapes of American preteens hailed as The Next …

Bio Tidbits: Was born with a cleft lip. His father, Predrag, a talented basketball player in his own right, suited up for 15 years with Croatian club Sibenka, where he played alongside a young Drazen Petrovic in the ’80s.

Oh, Badass! I Bet Predrag and Dario Have a Fantastic Relationship! Not quite. Actually, as recently as last year, the two weren’t speaking to one another. You know how they say you’re your own worst critic? Well, Dario’s dad is his worst critic, and it isn’t close. Since singing his son’s praises back when Young Dario was a hatchling, he’s proceeded to shit on most of his son’s decisions. Last year, Predrag was frustrated by Dario’s choice to sign with Cibona Zagreb, the team Dario led to an Adriatic League championship this year. Dario’s dad was a big reason for last month’s rumors that he was withdrawing his name from the NBA draft. Predrag feels his son isn’t ready for the physical toll of the league, and he probably has a point. But most draftees aren’t. This tension likely isn’t much more than the normal clash between a son’s desire for independence and an overprotective father. The only differences are that the world is watching, and that Saric’s talents are worth millions of dollars.

Wait, So He Might Be the Next Fran Vazquez? Unlikely. He actually wants to be in the league. A report in late May said that Saric plans to play in the NBA next season if he’s drafted by the Celtics (no. 6) or the Lakers (no. 7). Otherwise, it might be another year before Saric makes his Stateside debut, since he still has commitments in Europe. That might actually make him more enticing for some teams with a late lottery pick, which could stash him overseas for a year of seasoning to avoid taking on immediate salary.

Biggest Career Accomplishment? Being named the Adriatic League MVP, then Finals MVP, in April as a belated 20th birthday present.

OK, But How Good Is That League, Anyway? Hey, now. You’re starting to sound like his dad.

Do You Think He Remembers the First Time He Dunked in a Game? Like it was yesterday. He was “exactly 14 years and 10 months” when he first knocked on heaven’s gate.

Does He Have a YouTube Clip Set to Croatian New Wave? Yes. Behold.

Why Should We Care About Him? Because we all just finished watching Boris Diaw come dangerously close to being the most unlikely NBA Finals MVP. Teams need multifaceted players now more than ever. At 20, Saric shows a lot of the same skills that make Diaw so special, minus the athleticism of Diaw’s younger days and the fat Buddha wisdom of his present. There might not be a pass that Saric can’t execute. Coupled with his solid defensive rebounding ability, you have a player who can pose an immediate threat to the defense as an outlet passer. At his best, he’s in motion with the ball, getting into the key, working around his defender’s initial assumptions, and making A-plus plays out of Plan B or C scenarios.

Domestically, we’ve taken to comparing UCLA’s Kyle Anderson to Diaw, but there is a reason why Saric is rated higher than Anderson. Saric has all the talent to suggest his apositionality, but you won’t have to bust your brain to figure out how to fit him on a team. He shows enough potential in the post and as a rebounder to see him as a legitimate NBA 4 with time. Teams worry that Anderson’s NBA transition will resemble something like a college quarterback converting to NFL tight end, and that his adjustment period will take time. Saric won’t be prolific right away, but in terms of portable skills, he has enough right now to become an immediate contributor. If he can continue to solidify his 3-point range (he shot 34.5 percent on three attempts per game in the Adriatic League), his prospects in the NBA will be a lot brighter. Is he going to be able to defend NBA wings, or is he strong enough to take on the David Wests of the league? Maybe not, but he’s shown the willingness to make a strong effort. With his size and attentiveness, he can seal off driving lanes of smaller opponents, and he has enough mobility to stay in front of face-up big men. A coach will be able to work his defensive abilities within an overall scheme.

OK, But Somehow It Feels Like You’re Holding Out on Us: You’re right. I’m sorry. I’ve buried the lede. This is why you should care about Dario Saric.

It’s all you need to watch to determine whether you’re in or you’re out on Saric. You’ll either love his obnoxious enthusiasm for the game and for his team, his silly dance, and his sharp elbows, or you won’t. He’s going to be that kind of NBA player. Maybe he’ll bust and drop out of NBA existence, but I sincerely hope he brings that wonderful dance to an NBA arena before he does.