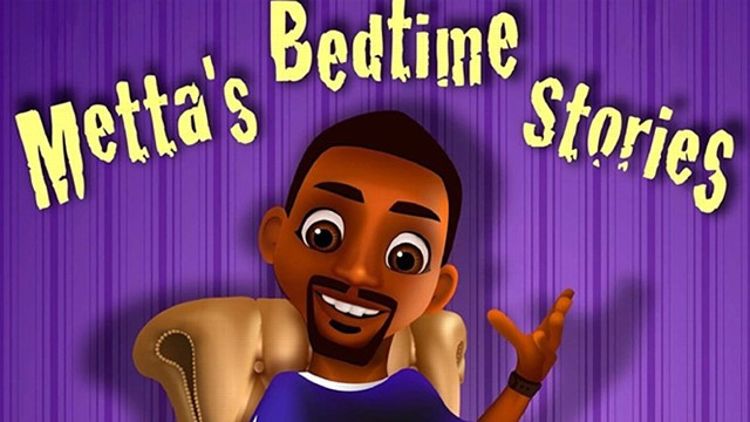 Last month, Metta World Peace announced the release of his first book, Metta’s Bedtime Stories, and my first instinct was to take out a credit card. I thought this would be the common reaction, but judging from the lack of reviews on the Internet, I guess not. The book has been out for about three weeks and there still aren’t any Amazon customer reviews. How is that possible? I’m not willing to believe that I’m the only soul on this planet remotely interested in Ron Artest’s contribution to the literary canon.

But if I am, so be it. Here’s your ultimate (and only) guide to Metta’s Bedtime Stories.

Whomever Metta consulted in the making of this book knew at least one thing about the children’s book game. A mark of a good children’s book is a memorable cover. The cover of Metta’s Bedtime Stories is very memorable, mostly frightening. It’s simple enough: Metta sits in a chair with a few books on his lap and an iridescent basketball by his feet. But the devil is in the details, which is a way of saying I think the devil lives inside Book Cover Metta’s outsize eye sockets. The eyes are so big, so unavoidable that you’re pulled into eye contact. Book Cover Metta’s eyes are drawn downward, and I understand this is probably meant to suggest the act of reading to imaginary kids sitting around him, but when you’re looking at it at eye level, it’s clear he’s not looking at you. He’s looking inside you. And it’s so thoroughly creepy, you’re more or less compelled to start reading the book if only for a brief respite from the soul probing.

But before I get to the words, I should note that Metta World Peace is a member of the Los Angeles Lakers, one of the 30 teams in the National Basketball Association. Purple and yellow are the Lakers’ primary colors. He subtly hints to his team affiliation with the purple backdrop on the cover and the title’s yellow typeface. But just in case you don’t immediately make the connection, Metta makes it for you: All but one page in the book uses highlighter-yellow paper. Pretty positive this was one of Metta’s executive decisions.

The book, consisting of five stories, begins with “Reach for the Sky,” a short list of affirmations (“Reach for the sky, and you can be a movie star”; “If you like animals, you can work at the zoo”; “You can be a president who brings peace to the world”). It’s not really a story — more a list of desirable possibilities — but it’s nonetheless a good primer for the general tone of the book. “I’m Afraid of the Dark” deals with overcoming chair monsters and is based on Metta’s actual fear of the dark. “Mud in My Bed,” my personal favorite, is about the perils of blaming others before taking the time to revisit one’s own actions. (“I’m Afraid of the Dark” and “Mud in My Bed” also hold the distinction of being the only children’s stories published in the last two decades to make use of the semicolon.) Metta may be NBA’s foremost surrealist, but most of the stories in Bedtime Stories are grounded in very common life lessons and situations that young children deal with — except for the last story, “One Wish,” which is literally a fairy tale.

There’s a very basic formula to the page layout. Most pages have two lines of text on top and two on the bottom, with an illustration in the middle of the sandwich. If you thought the illustrations in the book would be styled differently than the cover … why would you think that? The different characters in the book fall under the same computer-generated, faux-3-D style that heavily emphasizes shadows and shading to draw out the dimensions. All illustrations were done by HH-Pax. After a little Googling, I learned that HH-Pax is a freelance digital artist based in Ukraine. If you wanted to commission her for similar work, her minimum rate is $20 an hour. For the most part, the illustrations are inoffensive and even pleasant once you get past the eyes. But the desire for a three-dimensional look gets HH-Pax in trouble at times. For example, if you refer back to the cover — sorry — Metta’s right hand is clearly meant to look like it’s perched on the armrest. It looks more like a walrus flipper. And even her most innocuous depictions can come off a little … off. In “Mud in My Bed,” there’s an illustration of a boy asking his parents if they left mud under his bed, but tell me this doesn’t look like a poor kid walking in on his dad and a mistress: (Also, it might be too hard to tell from that image, but there is a newspaper and a magazine on the coffee table. The words on both texts are printed backward.)

Beyond the questionable design choices, there is one glaring problem with Metta’s Bedtime Stories: It doesn’t actually function very well as a bedtime story. The sedative property of bedtime stories come from the constant rhythm of narration. There’s a groove that the child and storyteller hit together after rounds and rounds of repetition. All of Metta’s stories have that kind of pattern, but none of them are sustained for nearly long enough to induce drowsiness. At 32 pages of actual content, it’s half the length of Green Eggs and Ham, but with five times the amount of stories inside. It sounds like a great value, but it means you’ll probably end up reading all five stories before the kid actually falls asleep. And the idea of having to process different stories with different morals involving animals, chair monsters, soldiers, mud, and fairies in a very short amount of time sounds like a solid recipe for nightmares. As a rule of thumb, children’s books that give both the child and caretaker nightmares aren’t ones you want in your collection.

And believe me. You will have nightmares.