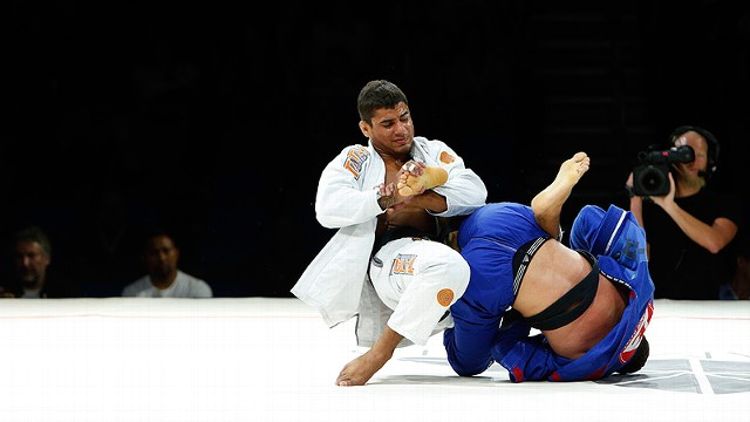 Maybe I’ve never worn a gi and maybe I’ve never rolled, but I am still passionate about mixed martial arts. What little I know of jiu-jitsu comes from my neighbor, Tim, who enjoys making his friends submit during UFC broadcasts. “You see that? You see how he did that? Here’s what just happened,” he’ll explain while mounting his buddies on living-room floors. It’s only kind of awkward. Really.

Although jiu-jitsu is the keystone discipline of MMA, it’s a niche spectator sport on its own. Positioning and patience may translate easily to an appreciative practitioner, but the sport’s nuances pose a hurdle for inexperienced observers. I needed answers. That’s why my friend Dylan and I headed to UCLA’s Pauley Pavilion recently for the second Metamoris Pro Brazilian Jiu-Jitsu Invitational.

What does “Metamoris” mean other than time-consuming Google tangents about Metta World Peace and “Meta” Morris Day? Even a cursory search of the event’s Twitter feed left me wondering if Metamoris was part of a rehabilitative speech program. But
Ralek Gracie, the event’s founder, is certain of its origins, saying it’s “inspired by one of my favorite books, The Song of Metamoris, a story about uniting the American Indian tribes to pursue a common goal.”

Applying a similar theme to the many schools of Brazilian jiu-jitsu, Metamoris seeks to embrace the highest ideals of competition: unity and shared experience … like the common bond forged when one fighter chokes out another. You might remember Ralek’s father, Rorion, as the mastermind behind 1993’s original Ultimate Fighting Championship. You also might remember Ralek’s unassuming uncle, Royce, winning decisively at UFC 1, 2, and 4, putting Gracie jiu-jitsu at the forefront of mixed martial arts in America in the process. Rorion believed a superior fighting style could only be determined one way: with a format unencumbered by rules.

Ralek and his business partner, Robert Zeps, embraced that vision with the goal of returning jiu-jitsu to its purest form; honoring the pursuit of the submission, not points. And while a panel of three judges can still declare a winner after 20 minutes, the performance must be dominant or it’s rendered a draw. You tap, you stall, you lose. That’s the dream of Metamoris in a nutshell. Now they’re teaming with some of the world’s most accomplished jiu-jitsu practitioners, hoping to free the sport from scorecards and promote new stars along the way. If they can eventually make a profit through live streaming, sponsorships, and television, even better.

As we made our way into the Pavilion, two things stood out: the lack of metal detectors (standard at MMA events) and a visually striking 32-by-32-foot elevated canvas with stage lighting. Supporting the action on the mat were two large projection screens flanking UCLA’s JumboTron. I noticed Rickson Gracie surveying the floor as the crowd filtered into the arena. Undefeated in his own MMA career (11-0), and revered for his stamina, Rickson walked briskly up a long flight of stadium stairs before disappearing into the concourse. Forget about a Family Guy cameo of him scurrying behind a partition so no one could see him gasping for air. Instead, picture the wolfpack of admirers as witnessed by Dylan. His text said it all, “Rickson’s getting mauled up here!”

Not that far away, Royce sat happily at an autograph table — working the Sharpie, taking pictures, and conversing with a line of fans. Royce set the standard for MMA with his masterful use of technique and leverage, often against much larger opponents. Later that night, he’d accept a lifetime achievement trophy while wearing a “Godfather of MMA” T-shirt, with James Caan watching from a front-row seat. (Coincidence? I’m still not sure.) But the Gracie name can only take you so far. The night before, UFC on Fuel 10 rendered an astonishing eight submissions on a 12-fight card. The best-laid plans of Metamoris II would muster just one submission in six fights, down from three at its first event.

That wasn’t the only problem. Shortly after an injury forced Ryan Hall out of his match with Bill Cooper, Cooper was released by Metamoris for “unbefitting” conduct. A replacement fight between Victor Estima and Keenan Cornelius got submarined by Cornelius’s knee injury, leaving us with a match between fourth choice Estima battling fifth choice J.T. Torres. Things became so disjointed, it was rumored Torres would eventually replace Estima so that Estima could fill in for Torres. It may have happened — no one knows for sure.

Despite inconsistent action throughout the card, the Metamoris II crowd remained generally positive, with Roberto “Cyborg” Abreu’s decision victory against Brendan Schaub being the exception. Abreu tried repeatedly to engage the exceedingly cautious brown belt, but Schaub had none of it. He retreated, recoiled, receded, and sprawled, avoiding Abreu like he was a TMZ photographer. Poor Abreu exhausted every means available to entice Schaub into his guard; in retrospect, he should have mocked Colorado football. The real loser? Matt Mitrione, who showed up to scout Schaub for their upcoming fight on July 27. He would have gleaned more insight from watching him shave. At least Schaub made us remember this.

Leave it to the Gracies to save the night. With Rickson working the corner of his son, Kron, during the main event, we finally achieved the vision of Metamoris’s creators. Kron’s dramatic submission of Shinya Aoki (via guillotine choke) was as picturesque as it was technical, earning a frenzied ovation from fans and generating some bonus intrigue.

Here’s what happened: As Gracie rolled over to tighten his grip on Aoki, the two men came close to tumbling over the edge of the canvas. That’s when a mysterious man appeared to use his back as a buttress to keep Aoki’s legs on the mat. Questions swirled about the man’s identity, or whether the fighters should have been reset because of outside interference. But since nobody wrote a third-party trapezius muscle into the Metamoris rulebook, the moment came and went. Aoki’s tap had little to do with “The Immaculate Back.” A gracious Aoki agreed afterward, admitting, “I brought my best. Kron was the better fighter.” At least that’s how I interpreted the interpreter’s interpretation of Aoki.

All in all, there were three decisions, two draws, one submission, and one Sons of Anarchy sighting. Metamoris even treated fans to a preview of its next superfight: a long-awaited rematch between Royler Gracie (four-time Mundial champ) and Eddie Bravo (the first American to ever submit a Gracie in competition). It’s hard not to get chills.

At the postfight press conference, Bravo told reporters, “The UFC got me into jiu-jitsu. Jiu-jitsu didn’t get me into the UFC.” Even if that sounded like some kind of code to promote the legalization of marijuana, Bravo’s journey remains relevant; plenty of fans are open to broadening their understanding of mixed martial arts. Will Metamoris reel them in?

The best thing you could say: Aesthetically, it feels like a potential competitor, thanks to an upbeat atmosphere between fights and even occasional outbursts of live Brazilian music. Involving crossover athletes from other MMA organizations always helps from an adrenaline standpoint, both in the card and in the crowd (thank you, Chael Sonnen and Benson Henderson!). The production value is stellar, although neophytes would benefit from access to commentary. Offering on-site radios, with the same audio feed on the Internet, would also enhance the live experience.

Even if it’s not the UFC, it’s not intended to be, either. It took me a while just to get accustomed to the occasional lull and remarkable quiet. (Think Wimbledon, not Bellator.) But for a promotion still in its infancy, Metamoris has already built a distinctive brand and made a compelling case for submission-only competition. Their long-term goal is no different from a friend wanting to demonstrate an armbar on a living-room floor: grab hold of the curious, improve position, and slowly tighten the grip.