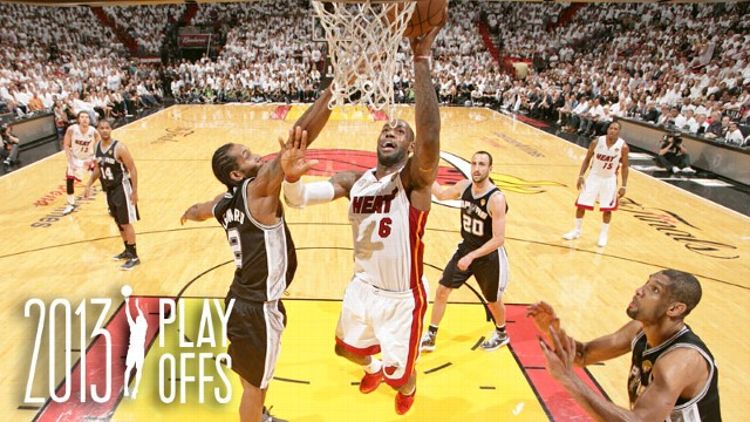 With exactly five minutes left in the fourth quarter, LeBron James held the basketball about 30 feet from the rim. The Heat were beginning to “run clock” as they fought to close out the Bucks in Game 4 of their first-round series. James stood calmly atop the ‘O’ in the “NBA Playoffs” decal; the shot clock drained. His defender, Luc Richard Mbah a Moute, waited about four feet in front of him. In a scouting report from the summer of 2012, John Hollinger had described Mbah a Moute as a “potent defensive force” with freakish length, a high motor, and lateral quickness. 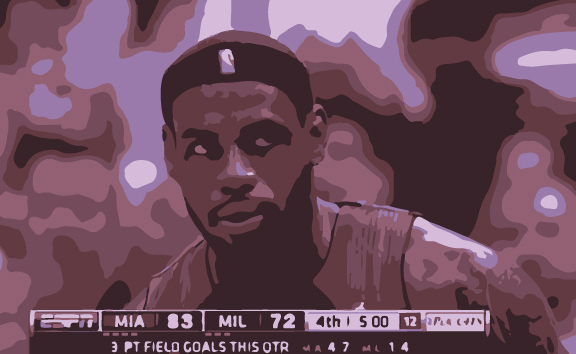 With 4:56 remaining and eight seconds left on the shot clock, Mbah a Moute engaged LeBron. James took a short step to his right but quickly changed his course, using a left-handed dribble to propel himself down the left wing and aggressively attack the left block. By the time James gathered up his second dribble he had surged past Mbah a Moute and arrived deep into scoring territory. He elevated and released a high-arcing teardrop that dropped through for two points.


That particular drive in Milwaukee showcased the astonishing blend of skill, smarts, power, speed, balance, and grace that makes James so special. Late in a playoff game, in a half-court scenario, James had traversed 30 feet of court space in just two dribbles and just two seconds; he’d beaten his man and scored a key basket all by himself.

When LeBron attacks, great things happen for his team. I like to argue that a LeBron James drive toward the basket is the most effective “move” in the entire NBA; I don’t believe any other action by any other player in the league is as valuable. Using player-tracking data such as those collected by the famous SportVU cameras, we can measure, quantify, and compare basketball actions like never before. It’s this data that is helping understand the value of things that previously went unmeasured, things like LeBron James drives.

On average, NBA teams generate about one point per possession. Depending on the nature of a given possession and its main characters, however, some yield more expected value than others. For example, Atlanta Hawks’ possessions that end with a Josh Smith spot-up jumper yield 0.79 points on average, much lower than that one-point baseline. Conversely, Warriors’ possessions that conclude with a Steph Curry spot-up generate an average of 1.3 points.

When LeBron drives, the Heat generate a staggering 1.6 points per possession.

James is the best player in the NBA. He absolutely crushes the Jalen Rose Test (can a guy shoot, pass, and dribble?). His jump shot is suddenly elite, his passing is top-notch, and his strengths as a ball handler seem unfair for a man his size. The combination of his size, athleticism, and skill manifests in a freakish ability to score the basketball close to the basket. Nobody is better. During the regular season, James not only led the NBA in points near the basket, he also was first in close-range field goal percentage. That’s domination.