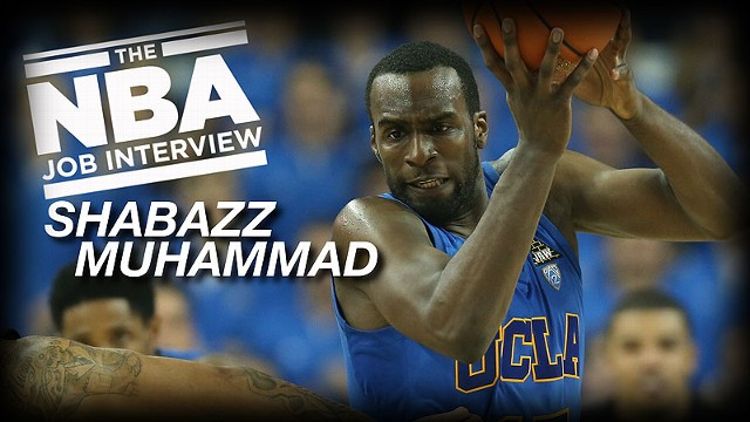 Jalen Rose and Bill Simmons question NBA draft prospect Shabazz Muhammad about the controversy over his age, as well as his backpack and his reaction to a teammate hitting a game-winning shot. Check out a short clip below, followed by Brett Koremenos’s scouting report and the full-length video. Watch all the NBA Job Interviews here. And watch this space for more NBA Job Interview videos, featuring Bill Simmons, Jalen Rose, and some of the best young talents from the 2013 NBA draft class.

It’s hard to focus on Shabazz Muhammad as a prospect with all the controversy surrounding him this past season. First the L.A. Times uncovered that his father falsified his age, making Muhammad a year older than he claimed. Now that same father has recently been indicted on charges of federal bank fraud, prompting a scathing column by CBS college basketball analyst Doug Gottlieb warning potential employers about drafting Muhammad. With such a circus surrounding him, it’s been hard to focus on what exactly Muhammad brings to the table as a basketball player.

At 6-foot-5, he’s a bit on the small side for a small forward, his projected position at the NBA level, but makes up for it with tremendous length — the UCLA product has a 6-foot-11 wingspan. Muhammad’s lateral quickness is an issue, and he relies primarily on using strength, rather than speed or explosiveness, to excel. Unfortunately, his skill set has just as many question marks as his athleticism.

Muhammad is at his best offensively finishing in transition, but is a little too committed to running out, often leaking out at the expense of rebounding and defense. He can do some damage off the ball in the half court on offensive-rebound putbacks and cuts, particularly fading off screens. But Muhammad is extremely left-hand dominant, and while his spot-up shooting is solid — 56.5 adjusted field goal percentage on catch-and-shoots while converting 37.7 percent from 3 in general — he is the ultimate ball stopper, blatantly ignoring teammates both on the break and in the half court. On top of that, Muhammad also had a bad habit of distributing the spacing of UCLA’s offense by drifting toward, and calling for, the basketball (an AAU-born habit if there ever was one).

Even with a marginal offensive game, Muhammad’s length and strength could make him a defensive stopper with the right mind-set. But at UCLA, his focus on that end of the floor was inconsistent, and he put far more effort into crashing the offensive glass than he did tracking down opponents’ misses. This all adds up to a high bust potential if Muhammad’s approach doesn’t drastically change.