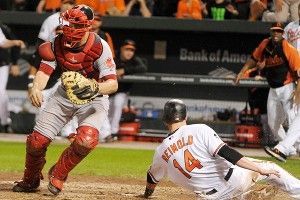 Trying to handicap the home stretch of a pennant race is an exercise in futility. Can Nate McLouth and Lew Ford carry the Orioles to postseason glory? Will Ervin Santana and Dan Haren lead a huge Angels comeback after stinking for most of the season? Could the Brewers pull off a miracle? With so many variables to consider for each of these teams, these questions might seem unanswerable.

And, just when you think you’ve got it all figured out, there’s this: Every contender is at risk of getting knocked out by a spoiler. Trying to deduce which lousy teams are most likely to blow up a contender’s season is even tougher.

Few teams have a bigger opportunity to wreak havoc on the rest of the year than the Indians. Cleveland has six games left against the AL Central–leading White Sox, including three in Chicago to end the regular season. But as Indians fan Noah Hunter reminds us, also-ran teams might have conflicting goals as they play out the string on a lost season. Check out these three box scores. Notice a recurring theme? In each of these games, the Indians started a bunch of … let’s say, non-elite players — Cord Phelps, Russ Canzler, and Vinny Rottino, to name three. In each of those games, Manny Acta suddenly got aggressive in the late innings, pinch-hitting with the superior players he’d mysteriously stranded on the bench. As Noah put it, it was “like the prism of the mind (the GM, resigned fan) wanting losses, and the heart (manager, diehard fans) wanting wins.”

In the National League, the Mets still have the Phillies, Pirates, and Braves on the schedule. The Marlins have two series against Atlanta, one against Philly. The Padres play the Dodgers and Brewers (and the Giants for six games, though they’ve all but clinched the NL West). The NL’s biggest potential jerks are the Astros, who get 12 straight games against the NL Central’s three wild-card contenders and are playing better than they have all year, with a winning September record through Monday.

If any of these teams want inspiration, they’ll find many past examples of spoilers shaking up pennant races. Here are a few of our favorites of the past 30 years, from least to most recent:

The Giants-Dodgers rivalry has seen a bunch of seasons end in heartbreak, with the Dodgers more often on the losing end for one long stretch. The Giants ended the Dodgers’ 1962 season, and most famously its 1951 season. In ’82, they did it again. Heading into the last series of the season, the Giants and Dodgers both sat on 86 wins, with a chance to win the NL West title. The Dodgers clobbered San Francisco by a combined score of 19-2 in the first two games of the series, knocking the Giants out of the playoff hunt. In game three, the two teams moved to the bottom of the seventh, tied 2-2. After Tom Niedenfuer put two men on base (Poor Tom was a good, sometimes great reliever who unfortunately will likely be better remembered for a handful of ill-timed meltdowns), the Dodgers summoned lefty Terry Forster. With one out, Forster faced Joe Morgan … and watched his 2-2 pitch sail over the wall for a three-run homer, torpedoing the Dodgers’ season.

L.A. would get a small measure of revenge 11 years later. The year before the wild card was to be implemented, the Braves and Giants hooked up for one of the greatest divisional battles of all time. Once again, the Giants and Dodgers would meet for the final series of the season. The red-hot Giants won the first three games of the series, giving them 14 wins out of their past 16 games, and placing them in a tie with Atlanta at 103-58, with one game to go. Then the Dodgers annihilated their season. Mike Piazza belted two homers, and the Dodgers destroyed San Francisco 12-1, giving the Braves the NL West crown.

The Giants looked primed to grab the NL wild card on the final day of the ’98 season. Heading into the bottom of the fifth inning against a mediocre Rockies team, San Francisco led 7-0. Then the wheels came flying off. Colorado scored six in the fifth and two in the seventh to take an 8-7 lead. The Giants tied the game in the eighth. Then in the bottom of the ninth, lights-out Giants closer Robb Nen, who’d allowed just three homers and struck out 110 batters in 88⅔ innings, faced Neifi Perez, who’d end his career with just 64 home runs in 5,127 at-bats. On the first pitch, the hacktastic, light-hitting infielder launched a game-winning solo shot. Perez’s homer forced a one-game San Francisco playoff with the Cubs, which the Giants lost.

Not quite an elimination job, but pretty damn close. After splitting a two-game series with the Astros to close out September, the Reds stood tied with Houston heading into the final series of the season. Even if a division title didn’t work out, Cincinnati only needed to take two out of three from a lousy Brewers team to secure the NL wild card. Nope. The Reds dropped the first two games of the series before scrambling to tie the Mets and set up a one-game playoff to decide the wild-card winner, a game they would go on to lose. The real backbreaker was the first game of that Brewers series. Cincy took a 3-0 lead after four innings, before Milwaukee rallied for one in the sixth and two in the eighth. After hitting Mark Loretta leading off the bottom of the 10th, Reds reliever Scott Sullivan got Jeff Cirillo to pop out a bunt, then struck out Jeromy Burnitz. But two straight singles cost the Reds the game, and eventually, a playoff spot.

With nine games to go in the season, the Cubs owned a three-game wild-card lead over the Astros. Houston won eight of the next nine (including seven in a row to end the year), while Chicago went just 2-7. Five of those Cubs losses came at the hands of the Mets and Reds, who won 71 and 76 games respectively in ’04. Five of those losses were also one-run affairs, and three of them came in extra innings.

The infamous Rocktober season ended in brutal fashion for the Padres. Despite a four-game losing streak of their own in September, and a mad dash to the finish by the Rockies, the Padres were one strike away from clinching the NL wild card on the second-to-last day of the season. They had one of the greatest closers of all time on the mound in Trevor Hoffman, and were facing Tony Gwynn Jr., the son of the greatest Padre of all time and a decent, but unspectacular hitter. Gwynn got a pitch to handle and tripled home Corey Hart to tie the game, and the Brewers would go on to win in extra innings. The Padres lost again (and the Rockies won again) the next day, forcing a one-game playoff for the right to advance to the League Division Series. The Rockies would prevail in a 13-inning thriller, one won on a controversial play in which Matt Holliday might have never touched home plate.

Game 162 of the 2007 season will go down as one of the lowest in Mets history. While the Rockies and Padres were battling down to the final game for the NL wild-card spot, so, too, were the Mets. Actually, forget the wild card — the Mets held a 2½-game lead over the Phillies for NL East supremacy with a week to go. Then they lost five in a row, setting up the final-game showdown with the Marlins. We should probably use the word showdown loosely. The Marlins scored seven runs in 1/3 of an inning, knocking Glavine out of the game in a flash and ending the Mets’ season. Things got a little more interesting in ’08. Again down to their final game of the year, the Mets and Marlins went to the eighth inning tied 2-2. Then Wes Helms led off the eighth with a homer, and Dan Uggla slammed the nail in the coffin by it making back-to-back shots, allowing the Brewers to overtake the Mets and claim the wild card.

On the greatest final day ever seen in a major-league season, Boston’s path to elimination got a little help from the Yankees. After fielding a lineup full of regulars to start the game and breaking out to an early 7-0 lead, New York benched their starting position players and starting pitchers. And when the time came to nail down the save that might end rival Tampa Bay’s season, the Yanks went with Cory Wade over incredibly stingy 2011 setup man David Robertson and all-time great closer Mariano Rivera. But let’s face it: When it comes to the end of Boston’s 2011 season, and to the greatest spoiler of the past few years, no one quite stacks up to Robert F’ing Andino.

Cam Newton and the Diversity of Carolina's Zone-Read Package