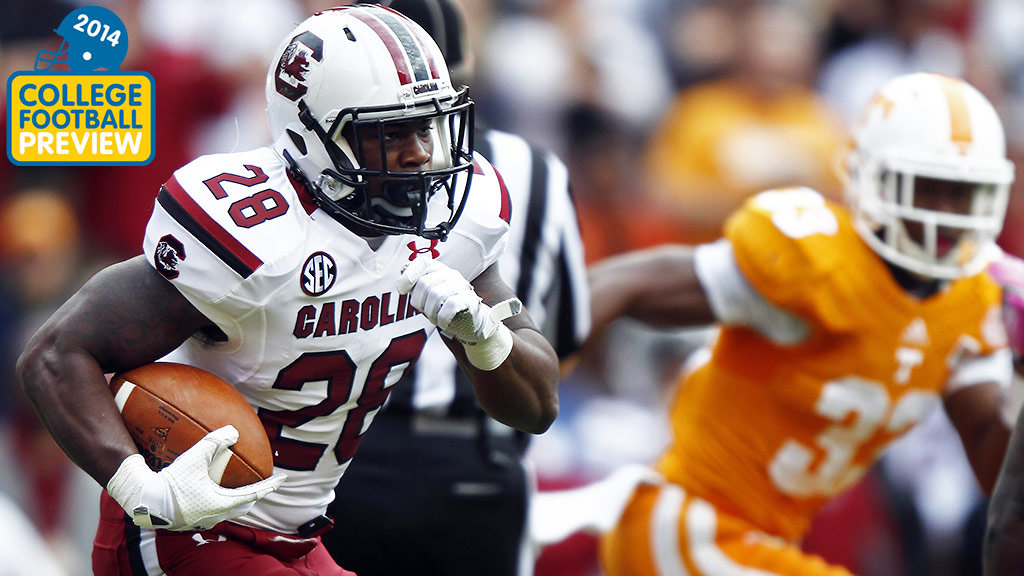 Like many sportswriters, I got my first real experience at my college paper. I was particularly lucky, though, because in my case that meant covering Steve Spurrier for The Daily Gamecock.

One particular postgame press conference sticks out in my mind. My senior year, SC beat Tennessee, 27-6, in probably the worst football game in recent SEC history that didn’t involve Will Muschamp or Mississippi State. If there was a single contest that got Phil Fulmer fired, this was it.

As always, Spurrier sauntered up to the dais, sat down, picked up the box score, and eyeballed it for a moment before saying, “Welp,” in his trademark high-pitched drawl, and using that “Welp” to transition into his opening statement like a gymnast dismounting a pommel horse.

“Welp,” Spurrier said, “I don’t know that I’ve ever won a game where we punted eight times before.”

The reason the Gamecocks had to punt eight times was a running back named Mike Davis, who’d managed only 58 rushing yards on 26 carries. Earlier that season, Davis had fumbled away what would’ve been the game-tying touchdown against no. 2 Georgia, and he’d spent the seven weeks between the Georgia and Tennessee games running into the line for no gain over and over like a broken remote-control car. He was a key offensive player for the Gamecocks all four years he was on campus, which might explain why SC went 28-22 during that span.

Unless you were in Columbia during Spurrier’s early days, you probably don’t remember the old Davis, and that’s very good news, because now there’s a new one.

In 2012, South Carolina lost its top two running backs, Lattimore and Brandon Wilds, and started handing the ball to a 5-foot-9 redshirt freshman from Atlanta with good wheels and a familiar name. The new Mike Davis isn’t related to the old one, though he is the brother of James Davis, whom you might remember sharing a backfield with C.J. Spiller at Clemson some years ago.

The old Davis represented Spurrier’s early years in Columbia: He was a second-tier back for a second-tier SEC school, running like Lou Holtz talks. In those days, armed with Holtz’s leftovers, Spurrier ran an uncharacteristically conservative playbook for a team that was often overmatched, had an offense that swung from adequate to invisible, and whose fortunes rested with the defense’s ability to keep the Floridas, Clemsons, and Georgias of the world bottled up enough to eke out a 17-13 win.

The new Davis is powerful. He’s nimble and versatile and distinctly world-class, representing the kind of team Spurrier has remade over the past decade to compete with the Floridas, Clemsons, and Georgias both on the field and on the recruiting trail.

The new Davis isn’t clearly better than T.J. Yeldon or Todd Gurley or whichever other more celebrated SEC running back you care to name, but he’s also not clearly worse. He guarantees that South Carolina won’t have a clear disadvantage in the run game in a single game this season. That’s a big deal for Gamecocks fans who’ve yet to completely adjust to the new paradigm.

You see, as nationally celebrated and locally beloved as Lattimore was, Davis the younger is better. Lattimore was a taller workhorse back who hit the hole hard, sought out contact, and, it seemed, got to five yards a carry by never gaining less than three yards while never gaining more than seven. Davis is faster, more explosive in the open field, and, stylistic differences aside, almost a yard better from scrimmage over his career.

As a result, Davis is the key player for South Carolina this year. The Gamecocks have to replace point guard turned wide receiver turned sex god Bruce Ellington, as well as Jadeveon Clowney and quarterback Connor Shaw, arguably the two best players Spurrier has coached at SC. The defense won’t be a worry, because with Clowney gone, officials will presumably start calling offensive holding again. And new starting quarterback Dylan Thompson is an experienced backup who played a key part in prior wins over Clemson and Michigan.

But without Davis anchoring the offense, those other pieces falling into place won’t matter. Davis is a special combination of reliable and explosive, and if he’s healthy and effective, he’ll make life immeasurably easier on Thompson and his new receivers. Davis is capable, in a best-case scenario, of leading the Gamecocks to the SEC title and making some Heisman noise along the way. And failing anything else, he’s already erased years of bad memories.

About Last Night: Manny Being Manny

Last-Minute MLB Trade Deadline Primer: Teams and Players to Watch As the Clock Winds Down