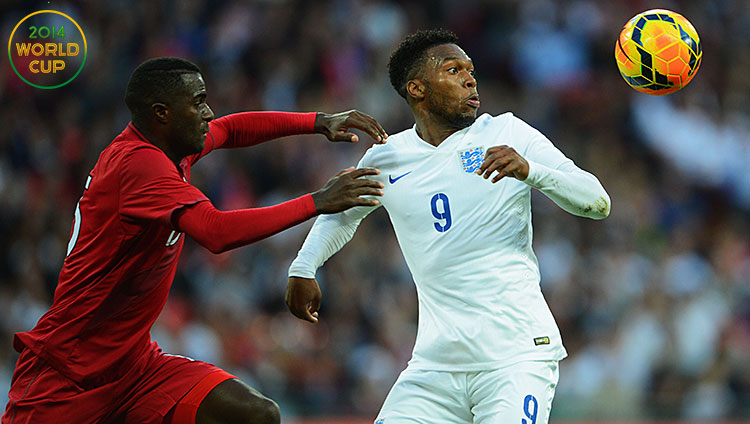 Dismissing England’s World Cup 2014 hopes before the tournament begins based on nothing more than history is so easy. Its inevitable failure has become a fait accompli. But this is not your father’s England team, overburdened by the triumph of 1966. Nor is it your older brother’s England team, which wasted the peak of a Golden Generation and missed out on Euro 2008. Nor is it the mid-’90s Spice Boys England team your weird British uncle rooted for. This England team has managed to pair perilously low expectations with the emergence of a legitimate world-class striker, 24-year old Daniel Sturridge. The Liverpool hit man is helping the national team dream of that rarest of English football accomplishments: overachieving.

For those unfamiliar with Sturridge’s recent accomplishments, they are staggering. Since transferring to Liverpool in January 2013, he has started 37 league matches and has scored in 31 of them, a mark that would match the Premier League goal-scoring record for a 38-match season. Over the past season, he managed to convert on his shots 24.7 percent of the time, more than double the league-average rate.

His partnership with Luis Suárez produced 52 goals last season, outscoring 11 Premier League teams. And Sturridge’s goals were big, with five coming in the rare moments that his team was trailing. Sturridge also served as a distributor, providing seven assists, as he shed the reputation for selfishness that followed him earlier in his career.

This goal scored against Stoke is particularly illustrative of Sturridge’s ferocity:

Sturridge’s play demands attention because of the sheer number of ways he can score goals. His strongest attribute is his left foot, which was on full display in England’s friendly win over Peru:

Moving across the top of the box until a window opens up, then a howitzer shot in the top corner? That’s a relatively blunt means of unlocking a defense, but Sturridge’s capacity to score this type of goal is crucial on the international stage. England’s roster is filled with his Liverpool teammates, but manager Roy Hodgson will likely ask Sturridge to rely on service from a trio of players with whom he hasn’t played with at the club level: Wayne Rooney, Jack Wilshere, and Ross Barkley. His ability to create chances without intricate interplay could be the difference between England going home after the group stages or making a real knockout-stage run.

Sturridge has become masterful at timing runs, sneaking in behind defenders trying to hold a higher line. England’s opposition will have to make a choice: play high and risk getting beaten over the top, or remain compact and let the likes of Rooney and Steven Gerrard play from the edge of the 18-yard box. Sturridge will get his chances either way, and even against the likes of Italy and Uruguay, he will likely get his goals. And with every goal scored, Sturridge can bust out his dance moves:

This is the exact kind of swagger the Three Lions need. I don’t want to say that Daniel Sturridge is the Russell Westbrook of English soccer … but:

Sturridge’s main weakness is his lack of aerial prowess. While he has improved his heading recently, he still remains poor in aerial duels, winning fewer than 20 percent in league play.

Picturing an England striker who can’t win headers is hard; this is the national side that shoehorned Andy Carroll into its Euro 2012 campaign. But then, this is a different England. It will likely still play long balls this tournament, but those long balls will be coming from the middle of the pitch, where Gerrard and Jordan Henderson will attempt to replicate their Premier League form on the world stage. As opposed to crosses, these balls demand a striker capable of making slithery runs, taking the ball off the ground, and finishing efficiently. This isn’t cross-and-pray football, this is slice-open-and-destroy football. And this is a brand of football Sturridge has become elite at playing.

England may well not even make it out of the group. It’s up against a very good Italian team and Suárez’s Uruguay side, and it has serious questions as to how its defense will function. But this isn’t the sort of team that should be written off. This isn’t other English teams, overburdened by expectations. This is a team whose heart is made of this year’s Liverpool squad, a fast and fun team, capable of scoring and shipping goals in quantity. And with Sturridge leading the line, it may just score more than it concedes all the way until it faces Germany.

ALERT: That 'Game of Thrones' Giant Is a Former McDonald's All-American