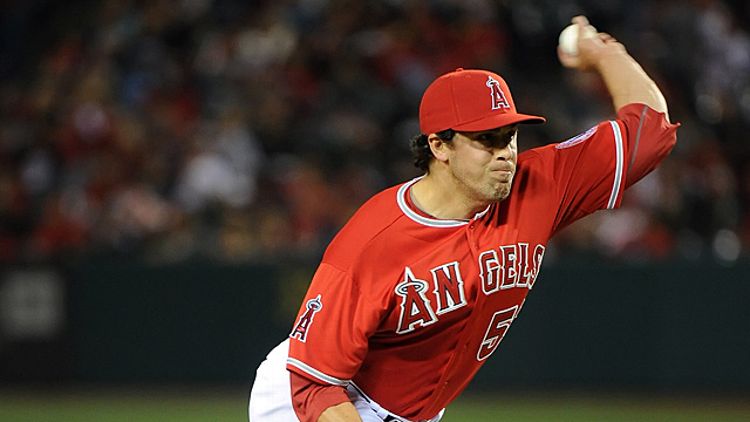 The Los Angeles Angels of Anaheim made a move Saturday that was much more interesting than it was significant. They put reliever Kevin Jepsen on the disabled list and called up a Double-A pitcher to replace him.

That’s not weird in and of itself, but you start to scratch your head when you consider that, going into Saturday night’s game, Michael Roth had thrown 27 professional innings, only five of which came above rookie ball. It gets a little weirder: Roth has only marginal control and breaking stuff, and his fastball is best described as “pedestrian,” not because it’s mediocre but because it travels from his hand to home plate at a brisk walking pace.

The last time I saw Roth pitch before his major league debut, he was appearing in relief in a WBC qualifier for Great Britain, getting the piss beaten out of him by Canada’s B-team in front of a few hundred fans in Germany. There are pitching prospects you rush from college to the majors, but Michael Roth is not one of them.

I’m extremely interested in this move for two reasons: (1) It makes no sense from a baseball perspective, and (2) Michael Roth is my favorite baseball player of all time.

Roth is kind of a funny-looking guy, with a tall, oblong head that doesn’t seem particularly well-suited as a resting place for a baseball cap. He’s a big, barrel-chested guy, a good athlete who started out as a first baseman and fields his position well, but his chin seems to meld into his neck, which makes him look kind of pudgy.

So why do I like him so much? Well, from 2010 to 2012, Roth led my alma mater, the University of South Carolina, to three championship appearances and back-to-back College World Series titles. And while some of his Gamecocks teammates (Sam Dyson, Matt Price, and Jackie Bradley Jr. come to mind) have much better professional outlooks, Roth is one of the most interesting athletes I’ve ever seen.

I’ve seen televised radar guns clock Roth’s fastball in the 90s, which serves, if nothing else, as evidence that TV producers are pretty reliably goosing velocity readings. Mechanically, Roth resembles a mix of Randy Johnson, a left-handed Orlando Hernandez, and Dr. Zoidberg from Futurama. His is a game of slop and guile, a shameless, bedeviling brand of anti-baseball that probably won’t translate to the major leagues.

Roth managed to flummox college hitters with a Moyers-esque array of off-speed stuff, low and away, mixing slow breaking pitches off the plate with slow fastballs off the plate, and changing arm angles to suit the situation and the handedness of the opposing batter. He pitched with an almost gleeful disregard for the established order, changing speed, location, and arm angle to blow through college baseball’s top hitters with no effort.

The typical Roth encounter for a hitter would involve very little in the way of pitches in the strike zone, but somehow he kept getting hitters to bite on absolute detritus low and away, at-bat after at-bat, until you’d take it as a given that Roth could pull off the baseball equivalent of walking up and grabbing Mike Zunino by the wrist, then winding up and using Zunino’s own hand to slap him in the crotch before running away in a fit of giggling, imploring the future no. 3 overall draft pick to stop hitting himself.

I love to watch good pitchers. More than that, I love to watch intelligent pitchers, unorthodox pitchers, pitchers who step aside and let hitters get themselves out. I love athletes who methodically — and with great emotional detachment — humiliate, confuse, and otherwise generally screw with their opponents.

Roth is an interesting guy, thoughtful and open in interviews where most ballplayers are happy to give platitudes. After four years of good grades in a competitive business program, Roth might have actually taken a pay cut by pursuing baseball as a career, considering how bleak his professional outlook was and how little minor leaguers make. He defies the myopic jock ethos with a Twitter bio that states “Baseball is something I do, not who I am.”

Michael Roth made his major league debut at home against the Astros Saturday night. Two innings, six batters faced, 22 pitches, four strikeouts. No one reached base or hit a ball out of the infield. Roth enjoyed an enormous strike zone and skirted its edges with a barrage of marginal breaking pitches and tepid fastballs, and he was unhittable. Albert Pujols hit a walk-off double in the ninth, and Roth recorded the win. Same as it ever was.

Saturday night doesn’t change anything. Roth is still a junkballer with barely any experience above rookie ball, and two great innings in a debut do not a Cy Young winner make. But it’s enough to make you hope.