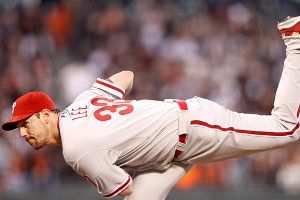 1. Matt Cain and Cliff Lee didn’t just dominate in Wednesday night’s 1-0, 11-inning battle. They blazed through batters with the kind of speed and efficiency that evoked an earlier era, completing the game in two hours and 27 minutes. That was the fastest 11-inning game since June 13, 1978, when Mike Flanagan pitched all 11 innings for the Orioles in their 3-2 home win over Seattle and starter Glenn Abbott, who went 9.2 innings. That game also lasted two hours and 27 minutes.

2. Lee’s line for the game: 10 innings, seven hits, no walks, no runs, seven strikeouts. He threw 102 pitches, a staggering 81 of them for strikes. Only three other pitchers this century had completed 10 innings in a start: Aaron Harang, Mark Mulder, and Roy Halladay (twice). Check out these spiffy Lee highlights.

3. Cain needed just 91 pitches to finish nine innings of work, striking out four, walking one, and ceding just two hits before Bruce Bochy pinch-hit for him in the bottom of the ninth. (Check these spiffy highlights, too.) Over his past two starts, Cain has thrown 18 innings, striking out 15, walking one, and allowing just three hits. Doesn’t he know you’re supposed to take it easy after you get the big bucks?

4. Neither Cain nor Lee got the win of course. That honor went to Giants middle reliever Clay Hensley, who tossed just three pitches but happened to record the final out of the top of the 11th.

We’ve already discussed wiping out the save rule forever. There shouldn’t be any reason to care at all about pitcher wins either, and last night’s result only amplifies the point. Use anything else — FIP, xFIP, SIERA — any other measure but wins to gauge a starting pitcher’s results. If you prefer counting stats, try Wins Above Replacement or Win Probability Added. Granted, it’s not as easy to figure out the WAR or WPA impact of one start the way it is with won-lost record. But better to use metrics that actually tell you something, rather than giving Clay Hensley all the credit for Matt Cain’s brilliance. You can get a plastic spork in any campus dining hall. Doesn’t mean you should use that spork to cut a perfect porterhouse. Pitcher wins are the sporks of baseball analysis: ubiquitous and useless.

5. Oh hey, while we’re on the save rule and the crazy things it makes managers do: Cliff Lee pitches the game of his life, and Charlie Manuel rewards him by … not using the guy the Phillies spent $50 million to sign last offseason. Last night’s losing pitcher, Antonio Bastardo, is an above-average setup man who’s pitched big innings for the Phils before. But let’s not kid ourselves. If all that mattered was winning last night’s game (and not blind adherence to roles), Jonathan Papelbon would have taken the ball in the 11th. As @CrashburnAlley writer @AtomicRuckus noted, that’s the third time in 12 games this season that the Phillies lost on a walk-off while Papelbon sat and watched. It’s already risky enough to spend four years and huge bucks on a closer, given the track record of such deals. You’re only making an overrated commodity even less valuable by refusing to use him in anything other than a traditional save situation.

6. The Phillies have now scored 35 runs this season, an average of fewer than three per game. Only the Pirates’ and Reds’ offenses have been worse. The lineup is a mess without Chase Utley and Ryan Howard, and Placido Polanco’s steady offensive decline (he’s better than this year’s .179/.220/.205, but he’s been going the wrong way since his huge ’07 season in Detroit) is compounding the problem. The always-aggressive Ruben Amaro Jr. might struggle to find an impact trade this time, given that the Phillies’ many trades and lost compensation picks over the past few years have dropped their farm system down to 27th in the MLB, per Baseball America. This won’t be the last time this season a Phillies ace devastates an opposing lineup and still comes away empty.

7. Melky Cabrera’s three-hit night, which included the game-winner, lifted his season line to .314/.375/.471. Meanwhile, Jonathan Sanchez is a talented lefty starter who hasn’t thrown a strike since the Harding administration. Small samples and all, but this trade probably ends in San Francisco’s favor. Maybe heavily so.