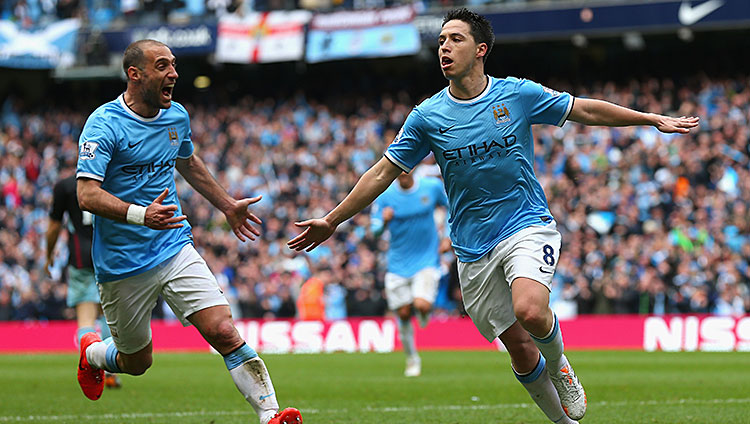 If you watched any part of Manchester City’s title-winning season, some things stood out: how frequently David Silva made defenses look like they’ve never played together, the number of bad haircuts on their backline. You probably didn’t watch and come away saying, “I’ll tell ya, that Samir Nasri. Wouldn’t you love to have a team full of guys like him?”

You wouldn’t want this because the Real Housewives franchise isn’t something to necessarily model a soccer club after, but also because, well, what does he even do? Yaya Touré does everything, Sergio Aguero does things that put the ball in the net, and Pablo Zabaleta will make you wish you played a less physical sport — like roller derby. Nasri, he just, I don’t know, passes it ‘round?

Except that, when Nasri passes the ball, it almost always goes to a teammate. The 26-year-old led City, completing about 92 percent of his passes, which was fourth-best in the Premier League and far and away the best rate for anyone classified as an attacking midfielder.

It’s tough to quantify the benefit of  someone who’s so careful with the ball so high up the field. And yet he was second on the team (obviously) to Silva in key passes per game, with 2.7. Across the league, among all players who completed 90 percent of their passes, no one else created more than one chance per game. Nasri steadied the rollicking death train that was often Manchester City in possession, but also accelerated it forward.

The quietly consistent on-field brilliance, though, is just a tiny bit at odds with the off-the-field Nasri. He taunted Arsenal fans a year after taking a big pay raise to move to Manchester. He’s, to put it kindly, disliked by the French press, partially because he has greeted them with salutations such as “Go fuck yourself! Go fuck your mother, you son of a bitch!” And he’s not necessarily loved by French fans, either, after basically attempting to re-mutiny the national team at the 2012 European Championships, followed up by some weak showings in World Cup qualifying. (In fact, it doesn’t even look like he’ll be on France’s roster when they head to Brazil this summer.)

Normally, it seems like the volatility of enfants terribles exists both in-game and out. Mario Balotelli might kidnap a stranger’s goat, he might spend an entire game looking like someone who’s protesting the futility of sports, or he might create a new branch of theoretical physics with one snap of the leg. On the other hand, someone like Xabi Alonso, after passing and passing and passing, will gladly discuss the merits of Homeland with you, just taking the occasional break to remind Liverpool fans that he still longs for Merseyside. But with Nasri, the two sides don’t quite fit — and stuff like screaming at journalists in Ukraine often drowns out the quietly vital, super-efficient play.

On the whole, Nasri appeared in 34 games, more than any City player other than Touré and Zabaleta, scoring seven goals and providing seven assists. He scored twice and assisted two more in the six-game, unbeaten run-in that clinched the championship. He wasn’t given any end-of-season awards and didn’t make any teams of the year, but in a season when Manchester City, the pricey, noisy neighbors, won the title despite never being the cover story, Nasri’s winning goal in the final game seems like a fitting way for things to end.