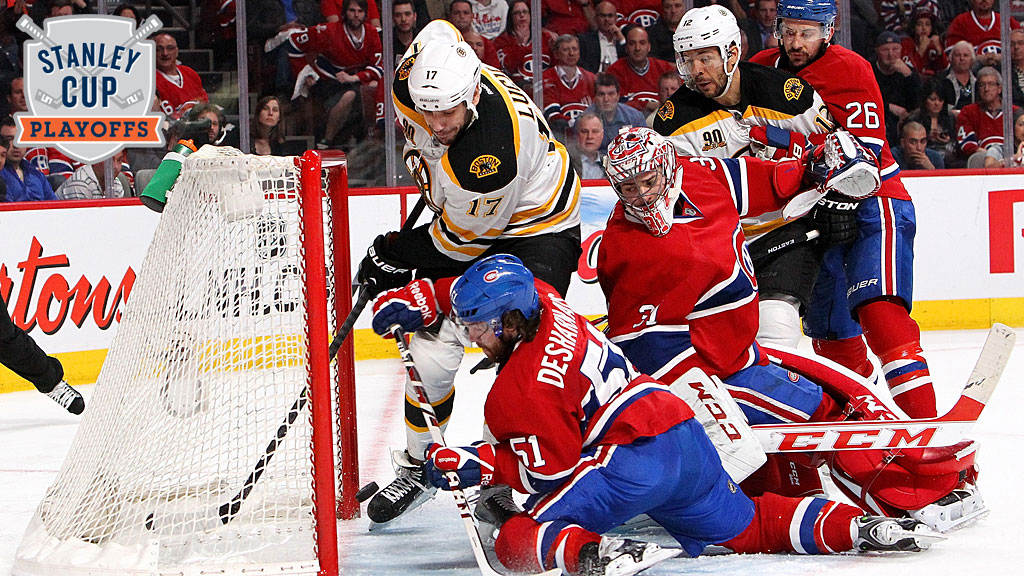 In hindsight, it seems silly to have expected anything else. This is Montreal and Boston, after all, one of the league’s best rivalries, and one that’s produced five Game 7s in the last eight matchups. This one has been an odd series, one highlighted by the usual big goals and clutch saves, but also by posedowns and water bottles. You had to figure that something would finally go according to the script. And so Game 7 it is.

Here are seven reasons we’re heading back to Boston for a deciding game Wednesday night.

Let’s get this one out of the way first. Because I was at Monday night’s game, I’m apparently obligated to tell you all about how great the building was. You know the drill by now: how the Habs are the only team that can do pregame ceremonies properly. How their small-kid-with-a-torch opening induces chills. How their fans are so loud, and so knowledgeable, they turn the Bell Centre into a madhouse without even needing the scoreboard to tell them to.

It’s infuriating, and as a Maple Leafs fan, I’d love to be able to tell you it’s all nonsense. But it’s not. A big hockey game in Montreal really is a sports experience you have to witness in person to fully appreciate. The building shakes. My ears are still ringing.

And of course, Boston’s TD Garden will be rocking Wednesday night (which led to this fantastic P.K. Subban postgame moment). But it won’t be quite like Montreal. I’m not sure anything could be.

Let’s never speak of this again.

Remember the opening round, with all those blown leads and crazy comebacks? That feels like a long time ago. The second round, as much fun as it’s been, has dialed down the dramatics. And that’s meant the inevitable return of everyone’s favorite playoff stat: the lopsided record in favor of the team that scores first.

And it has been impressively lopsided: Heading into Monday night’s action, the team that had scored the first goal in the second round was 19-1. So you knew that was going to be important, and was probably a point of emphasis for both teams going in.

And then, just two minutes in, this happened:

Probably not the way they drew it up.

No full-time starter matched Rask’s numbers this year, and there’s a decent chance he’ll earn his first Vezina as a result. Over his career, he’s posted the best save percentage the league has seen in the salary cap era, and no active goalie has a better career goals-against average. No, he hasn’t won a Cup yet as a starter, which some people feel is a prerequisite to being considered the best. Those people (1) are wrong and (2) might want to check back in a few weeks.

But if there was one potential matchup on the Bruins’ playoff horizon that could have looked like something approaching an even contest in goal, it was the Canadiens and Carey Price, who doesn’t have Rask’s career numbers but was very nearly his equal this season. And through six games, Price has been his equal again. This series hasn’t exactly been a goaltending battle — other than Boston’s 1-0 overtime win in Game 4, the winning team has managed at least four goals in every game — but both goalies have had to make their share of big saves. Monday night, Price made all of them.

Rask wasn’t to blame for the loss. He was hung out to dry on the first goal, the second came on a breakaway, and the third came on a power-play rebound that left him no chance. And he made a spectacular lunging save shortly after the first goal, which kept Montreal from an early 2-0 lead. He was fine. But Price was better.

The Bruins are a really good team. That sounds like something you shouldn’t have to bother saying about Presidents’ Trophy winners looking to make their third trip to the final in four years. But this is the playoffs, where there’s a tendency to treat every loss as an existential crisis. So it’s worth mentioning that, even in a game they’d eventually lose 4-0, the Bruins were absolutely dominant for long stretches Monday night.

The longest came in the second period, with Montreal holding on to a 1-0 lead. Boston put on a strong shift, and then another, and then a few more. The Bruins had Montreal pinned in the Habs’ own zone for almost five straight minutes, firing pucks at Price and playing keep-away with the Canadiens’ skaters. Subban, who’d just come out of the penalty box and was caught playing forward for a shift, looked lost, twice diving at a loose puck only to have a Bruin skate away with it. Milan Lucic missed an open net, which is usually where these things end, but Boston just collected the puck and kept going.

In the press box, someone joked that the shift just needed the Harlem Globetrotters music. If you were a Montreal fan, the Benny Hill theme would have worked, too. It was one of those shifts where a goal starts to feel inevitable. The Bruins were going to tie the game. It was just a question of when.

And then they didn’t. Montreal survived, and was able to get the game back to an even flow, and Boston’s moment was lost. But for those five minutes, the Bruins looked unstoppable.

We talked about Max Pacioretty’s slump on Monday. He’d been held to just two assists in the series’ first five games, and had admitted that Zdeno Chara was shutting him down. We weren’t the only ones to point it out — Pacioretty’s struggles had received plenty of attention in Montreal and beyond, and after the game he told reporters he’d made sure to read every article.

But the breakthrough finally came late in the second, with Montreal still clinging to that one-goal lead. Nathan Beaulieu, a rookie defenseman playing his first playoff game (and first game of any kind since the AHL season ended almost a month ago), spotted Pacioretty sneaking behind Chara and fired a bouncing, 120-foot pass in his direction. It wasn’t a perfect setup — the puck spun Pacioretty around at the blue line and trickled away, and for a second it looked like Rask would be able to charge out and smother it. But the Bruins goalie stayed put, and Pacioretty caught up to the puck just in time to slap it between his legs for a 2-0 lead.

Minutes later, Pacioretty set up another struggling Canadien, linemate Thomas Vanek, for a power-play goal. Vanek would later get Montreal’s fourth goal with an empty netter, and suddenly a top line that was slumping is hot heading into Game 7. Things change fast in the playoffs.

Some fans hate to hear about the role of luck in a game’s outcome, because it makes it sound like the wins and losses are somehow less deserved. If that’s you, feel free to skip ahead to the next section.

But I have a feeling Bruins fans are still with us, because they must be tearing their hair out at how the bounces have gone in this series. Boston’s shooters have done on a number on Price’s posts — and when they’re not hitting posts, they’re missing nets altogether, or fanning on shots, or watching a puck bounce over a stick blade.

We saw it Monday night on Kevan Miller’s misplay on the opening goal, and on yet another Price post in the first, and on Lucic’s miss, and on Beaulieu’s bouncing pass. Hockey is a game filled with little breaks, and Montreal has been getting most of them. The bounces aren’t all going one way, of course — Montreal’s Brendan Gallagher missed a wide-open net early in Monday’s game — but it has seemed one-sided.

The Save of the Game

The Bruins entered the third trailing by three, which for most teams would be enough to declare it game over. But this is Boston and it was an elimination game in the playoffs and, well, you know. They were one goal away from making a game of it.

And then they looked like they had that goal. It came at the end of yet another shift that saw the Bruins pin the Canadiens in the Habs’ own zone, applying the kind of pressure that has you sneaking a glance at the scoreboard to make sure you didn’t miss a power play. A Chara slap shot led to a scramble around Price, and suddenly Bruins players were pointing and celebrating.

Replays showed why: The Bruins had swatted the puck behind Price and to the goal line, where it hung in the air for a moment on its way into the net. But Montreal’s David Desharnais somehow kept it out, first diving to knock it out of the air and then swatting it away from the line (the latter move accompanied by a painful-looking face-plant).

It was a great play, and the kind of all-out effort teams love to rally behind. And it seemed to be the moment that finally convinced the Bruins it just wasn’t their night.

Montreal coach Michel Therrien was asked if he wanted to respond to Julien. He didn’t take the bait. “Anything can happen in a Game 7,” he replied. Nobody laughed this time.

The 23 Most Important Members of the USMNT